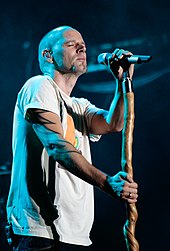 Thomas D at the Donauinselfest 2009

Thomas Dürr's grandfather Julius was a haulier and operator of a gas station in Ditzingen , which his parents Dieter (1938–2011) and Elisabeth took over from their grandfather in 1968. He attended elementary school in Ditzingen and Gerlingen . After completing secondary school , Dürr trained as a hairdresser . When he occasionally worked as a janitor, he gave himself the stage name caretaker Thomas D .

He is married, has a daughter (* 2003) and a son. The family lives with other musicians in the MARS (“Moderne Anstalt Rigoroser Spakker”), a rural commune near Daun in the Eifel , where “a peaceful, spiritually oriented, artistically spontaneous and vegetarian healthy lifestyle” is to be lived. The MARS residents run their own music label Haus Erika Productions there .

Thomas D is a member of the successful German hip-hop and rap band Die Fantastischen Vier . He was also able to record successes as a solo artist under the artist name Thomas D with his albums Solo (1997) and Lessons in Humility (2001). His best-known pieces include tail wind , hairdresser , love letter and solo (with Nina Hagen ) as well as the piece Wish from the film Lola rennt, sung together with Franka Potente . His solo publications are known for profound texts with philosophical content. So he also tried a rap from several poems by Schiller and Goethe. In addition to the Fantastischen Vier, Thomas D was also the singer and lyricist of the band Son Goku , which entered the charts in 2002 with the song Alle für Jeden from the album Crashkurs .

In the spring of 2005, Thomas D became a mentor of the rap project Young Poets and Thinkers . On 12 September 2008, he released his third solo album , marked D . As the first single of the new album, he released Get On Board in August . The second single Poisoned in Sleep , which was used in the credits of the movie The day the earth stood still , was released on December 5, 2008. Around Christmas 2004, Thomas D was with his family in the Thai holiday region of Khao Lak , as himself the devastating seaquake in the Indian Ocean and triggered a tsunami . "We were washed four and a half kilometers inland and survived, that's a miracle," said Thomas D four years after the disaster. He and his family survived the wave virtually unharmed. That he almost fell victim to the tsunami, he made public in 2008, also in connection with the album Kennzeichen D , on which the song To all bereaved can be found.

In December 2008, Thomas D appeared alongside Smudo as an advertising partner for World of Warcraft . In summer 2010 he was looking for singers for his new song on behalf of Deutsche Telekom . In mid-November this was published under the title 7 Seconds . In 2011, Thomas D was jury president of the program Unser Star für Baku , a casting show for the selection of the German participant for the Eurovision Song Contest 2012 . 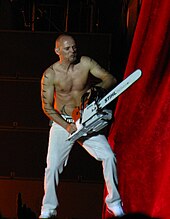 Thomas D at the song Schizophren ("Heimspiel" concert of the Fantastischen Vier, 2009)

Thomas D is a vegetarian and has been a vegan since 2013 . He supports the animal rights organization PETA , but received criticism when in 2003 he advocated their controversial “ Holocaust comparison ”. In 2008, together with the animal rights artist and illustrator Roland Straller, he developed the concept for an "Avenging Animals Collection" called Ich bin da - the VIP Collection .

Thomas D is also committed to climate and environmental protection. At the Protestant Kirchentag 2009 in Bremen he gave a concert for Bread for the World on the subject of “For justice and against climate change ”. His song “Prayer to the Planet” also deals with this topic.

On September 17, 2015, Thomas D, together with Til Schweiger , Sigmar Gabriel , Jogi Löw and other celebrities, announced the establishment of the Til Schweiger Foundation , in which he and others want to get involved in the interests of refugee children and other socially disadvantaged children and young people . According to its own statement, Dürr has already contributed 100,000 euros. The first project is to support an initial reception facility in Osnabrück .