Catharina "Nina" Hagen (born March 11, 1955 in East Berlin ) is a German singer , actress and songwriter . She is known as the German " Godmother of Punk ", influenced the German New Wave and was a pioneer of the Neue Deutsche Welle .

Hagen (far left) with Manfred Krug in the Friedrichstadtpalast (1976)

Nina Hagen was born in 1955 in the East Berlin district of Friedrichshain as the daughter of the actress Eva-Maria Hagen and the screenwriter Hans Oliva-Hagen . She originally wanted to become an actress in the GDR , but her application was rejected by the drama school without explanation. The MfS officer responsible had written the note “Prevent!” On the application for membership, as the dissident Wolf Biermann was her mother's partner and Nina Hagen was therefore also considered politically unreliable. After that she sang with several bands in Poland and thus came to the Alfons Wonneberg Orchestra .

As a teenager she sang in the Reinhard Lakomy Choir. In 1974 Hagen finished a one-year vocal training at the Central Studio for Entertainment Art as a certified pop singer ; their vocal range is given by the press as four octaves. Hagen was discovered by the Automobil group at a concert and immediately engaged. Their first release was the title You forgot the color film that two of the band members wrote on the East German record label Amiga . In 1975 she left Automobiles and switched to Fritzens Dampferband . A public declaration of solidarity for the ostracized Wolf Biermann, who was expatriated from the GDR in 1976, put Hagen on the sidelines, so that on December 28 of the same year she took the opportunity to emigrate to the West. She first went to Great Britain and was there in the punk scene .

After moving to the Federal Republic of Germany , she founded the Nina Hagen Band together with the Kreuzberg musicians Bernhard Potschka , Herwig Mitteregger , Manfred “Manne” Praeker , who had previously played for Lokomotive Kreuzberg , and Reinhold Heil . In 1978 the internationally acclaimed album Nina Hagen Band was released . Not much later, the singer fell out with the four musicians who accused her of being unpredictable and egocentric starry airs. However, since a second album had already been contractually agreed with the record company CBS, the recordings were initially made by the four musicians, and later - in the absence of the four musicians - Hagen's vocals were recorded. The title of the 1979 album is discomfort . In the 1980s, the four musicians were able to record great success under the band name Spliff without Hagen. In the 1980s and 1990s, Hagen drew attention to herself through her UFO theories, her great interest in spirituality and religion, and her commitment to animal welfare. These influences can also be found on the numerous record releases of this time, recorded with a wide variety of musicians. 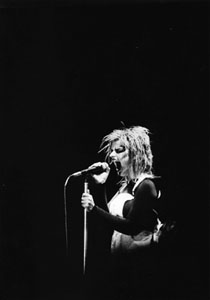 Between 1980 and 1986 Hagen lived mainly in the USA, London and the Netherlands and also performed frequently in the USA during this time. 1983 her LP Angstlos was released , the English version Fearless ; In 1984 she toured the USA and Europe with the program of the same name. In 1985 Hagen appeared at the premiere of Rock in Rio in front of around 300,000 spectators. In 1986 she returned to Germany. She stylized herself as a punk rock diva , advised by the fashion designer Jean Paul Gaultier . On her next records she acted cosmopolitan, sang sometimes in German, sometimes in English, and proposed herself to be president ( Street , 1991). In 1993 she made a new attempt with the album Revolution Ballroom and the producer Phil Manzanera . In 1996 she sang the title Weihnachtsnaach , a cover version of the Pogues title Fairytale of New York, on the BAP album America together with Wolfgang Niedecken . In 1997 she sang the song Solo with Thomas D , which was later released as a single, for his album of the same name.

For the 100th birthday of the playwright Bertolt Brecht , she moved back to her native Berlin in early 1998. Together with the actress and chanson singer Meret Becker , she gave the punk Brecht evening in the Berliner Ensemble. We're both Anna and talked to the poet. In 1999 she sang the soprano part of Celia Peachum for a CD double album of the Threepenny Opera with Max Raabe as Mackie Messer and the Ensemble Modern under HK Gruber , true to the original score by Kurt Weill . In 1998 Hagen recorded a new anthem for the Berlin soccer club 1. FC Union Berlin .

In March 2000, barefoot in a silk sari , she presented an “Indian Night” on the stage of the Berlin ensemble, fogged with incense sticks, in front of an altar with offerings. Part of the featured songs there appeared exclusively on Hagen's website, the proceeds of which half the Babaji - ashram , a German hospice, Brazilian street children, children's hospitals in India and Chernobyl should benefit. The filmmaker Peter Sempel made an experimental documentary, Nina Hagen - Punk & Glory, which documents the years 1994 to 1999, about Nina Hagen, her family and companions. She moved to the fore again through the collaboration with Thomas D and the bands Oomph! and apocalyptica .

In 2001 Hagen spoke for the Rilke project CD Up to All Stars, the poems The world that is moons and How the star is one. Nina Hagen's biography was published in December 2002 . That's Why the Lady Is a Punk by the writer Marcel Feige in close collaboration with Hagen. The book was awarded the Corine Literature Prize in 2003. In 2002 Hagen sang a remake of the classic Kriminaltango in a duet with the Swiss singer Michael von der Heide . In 2005, Hagen made a guest appearance on Frank Zander's album Rabenschwarz II and sang a cover version of Siw Malmkvist's hit Liebeskummer ist nicht sein . Furthermore, in 2005 she was the star guest of the Berlin Yoga Festival and the Vienna Life Ball , where she sang Falco's Ganz Wien (... is on heroin today) and the John Lennon classic Imagine with Omara Portuondo , Marianne Faithfull and Chaka Khan . 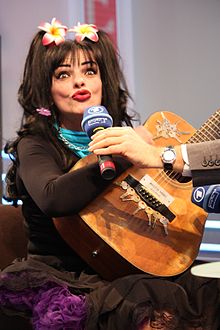 In 2006 and 2007 Hagen was a jury member for the casting show Popstars . In 2006 she began a musical collaboration with The Capital Dance Orchestra . With the album Irgendwo auf der Welt she sang film hits in a new guise in a big band sound. With the concert program of the same name, she went on tour with the orchestra in German-speaking countries in 2006. In March 2008, Hagen organized an educational show in Berlin, which she later published on the Internet (Nina Hagen uncensored) . There she publicly criticized the media, which, in her opinion, did not report constitutionally on current events in politics and business. On May 17th, 2008 Nina Hagen presented the song Kinky Melody at the Vienna Life Ball , which was also released on a CD by the fashion label Agent Provocateur .

In 2009 her English-language CD Personal Jesus was released , on which she reinterpreted well-known gospel and blues pieces. The Süddeutsche Zeitung wrote about it on July 9, 2010: “In doing so, it forces the listeners to adopt their newly-found Christian faith with a force that is difficult to escape. She can because she has a voice that dominates all emotional registers, from the coldness of Grace Jones to the frenzy of an early Tina Turner . ”On March 18, 2010, Hagen's autobiography , Confessions, was published . In 2011, the TV channel Arte showed the documentary Nina Hagen. Godmother of Punk . The newspaper Die Welt wrote about it on August 16, 2011 “In addition, Nina Hagen is extremely funny when viewed from a distance. Not just a laughing stock. A comedian before the Lord. "

Hagen is committed to compensating the Duogynon victims. She is a supporting member of the Coordination against Bayer Risks . On September 10, 2011, she appeared in the program of the freedom instead of fear demonstration for civil rights on Berlin's Alexanderplatz .

On January 31, 2012 in Berlin the premiere event of the found patient of disposition -Kinospots of the National Association of Psychiatric Survivors Berlin-Brandenburg e. V. instead. The special living will PatVerfü and the cinema commercial with Hagen are among other things with flyers on which your likeness and the slogan “PatVerfü - Geisteskrank? Your own decision! ”Can be seen, advertised and received new credits in April 2012 due to various differences. From 2013 to 2014 Hagen campaigned for the release and rehabilitation of Ilona Haslbauer and Gustl Mollath, who were wrongly held in psychiatric hospitals .

In 1979 she was in a relationship with the musician Herman Brood . The song Herrmann was called he is attributed to him. In 1981 Hagen gave birth to their daughter Cosma Shiva . Their father is the Dutch guitarist Ferdinand Karmelk, who died in 1988 . In 1987 Hagen married the musician “Iroquois” from the London squatters ' scene in a “punk wedding” on Ibiza . After a week, the couple separated.

Hagen has been a vegetarian since 1982 . In August 2009 she was baptized in Schüttorf by Pastor Karl-Wilhelm ter Horst as a Protestant Reformist.

1992 was Hagen next to Angela Merkel and a representative of the Federal Parents Council in the Sat.1 -Talkshow Talk in the tower guest. With her advocacy of neuro-electrical stimulation as the only way to help heroin addicts in the long term, she caused controversy on the show. Above all, their discussion behavior became a topic in the media. Among other things, she said: “I yell at you for as long as I want.” Or “I'm fed up with your lies and your hypocrisy.” The moderator Erich Böhme's attempts at arbitration failed and Hagen left the show in the meantime.

Thomas Nöske wrote about Nina Hagen in his book Pop-Shamanism (1999): “She talks about UFOs, cosmic energies, charity, wisdom and enlightenment, but even if you don't believe her, you don't necessarily feel lured or loaded. Even if you watch her for two hours doing nothing but faxing and making faces, you still take something home with you. (...) there are few fictional characters who are so consistently fictional characters, with the exception of Warhol and Bowie , who meanwhile, for their sheer consistency, almost lost themselves in their artificiality. Actually you have to take Nina Hagen for full because no second half is known for half and she is clearly too much for nothing. The distinction between mesh and real makes them obsolete. "

In the talk show Menschen bei Maischberger on September 6, 2005, Hagen appeared as an election campaigner for Bündnis 90 / Die Grünen and was described by Jutta Ditfurth as "esoterically a bit crazy". Thereupon Hagen said: “I think it's terrible what this fat woman does to me. Jutta Ditfurth, you are a stupid, stupid cow. I will never speak to you in public again! "

On October 30, 2007, Nina Hagen once again caused a stir on the show Menschen bei Maischberger with her statements and discussion behavior. In the program on "UFOs, angels, extraterrestrials - are we not alone?" She expressed sympathy for the people allegedly kidnapped by extraterrestrials, spoke of "satanic influence" in the world and provoked the physicist and science journalist Joachim Bublath , who was also present , after who had expressed skepticism about the existence of aliens or esotericism , with grimaces and insults for leaving the live broadcast. The moderator Sandra Maischberger finally explained: "(...) and, with all due respect, Nina, I have the feeling that a lot is really getting mixed up in your head (...)"

The number of all records and CD releases worldwide on which Hagen's singing can be heard is likely to be approximately 500. In October 2005, the Nina Hagen Archive showed 206 vinyl records, 180 CDs and 30 audio cassettes, as well as 21 video cassettes and 12 DVDs.

For many of her albums she produced an English-language equivalent, for example Fearless is the English version of Angstlos . Often there are bonus tracks on these, so they are not pure 1: 1 conversions.

Nina Hagen at the premiere of the film The 7th Dwarf on September 21, 2014

Wikinews: Nina Hagen  - in the news