The title of this article is ambiguous. See also: The New Germany .

Neues Deutschland (own spelling: neue deutschland , abbreviation: nd ) is a national daily newspaper with a focus on readers in eastern Germany . The newspaper, based in Berlin, sees itself as a “ socialist daily newspaper”. It has the legal form of a GmbH . The sold circulation is 19,531 copies, a decrease of 70.1 percent since 1998.

From 1946 to 1989 it was the central organ of the Socialist Unity Party of Germany (SED), the state party of the GDR . From December 1989 until the beginning of 2007 the newspaper was owned by the successor party PDS via a GmbH . Since then, it has been owned 50 percent by the Föderativen Verlags-, Consulting- und Handelsgesellschaft mbH - FEVAC , in trust for the party Die Linke with 50 percent nominal capital, and the Communio Beteiligungsgenossenschaft eG . The editor-in-chief of the newspaper was Tom Strohschneider from 2013 to 2017 . He left the editorial team at his own request at the end of 2017. Until a new appointment is made, his deputy Wolfgang Hübner will take over the management of the editorial team.

Title page of the May 29, 1958 edition on the resolved wage increase and abolition of ration cards

The New Germany was created as a licensed newspaper in 1946 as part of the forced unification of the SPD and KPD of the Soviet occupation zone to form the SED, which was operated by the Soviet military administration (SMAD) . The SMAD approved a print run of 400,000 copies with a length of four pages. The first edition of the "Zentralorgan der SED" appeared on April 23, 1946, following the founding party congress, and replaced party newspapers of the SPD ( Das Volk ) and KPD ( Deutsche Volkszeitung ), which ceased to appear. The name Neues Deutschland can be traced back to the efforts of the German communists at the time to build a different, anti-fascist, socialist, or even new Germany. It goes back to a communist exile newspaper in Mexico, which first appeared in 1942/43 as Alemania Libre (Free Germany) and from January 1945 as Nueva Alemania (New Germany). When the term Germany became problematic in the GDR against the background of the two-state theory around 1970, the abbreviation ND was increasingly preferred. The printed newspaper title remained unchanged until the end of the GDR.

In the GDR , the newspaper was one of the most important propaganda tools of the SED and the Council of Ministers it ruled . The concentration on the party and state leadership of the GDR went so far that 43 photos of Erich Honecker , the then Chairman of the State Council and General Secretary of the Central Committee of the SED , were shown in an issue of March 16, 1987 on the occasion of the opening of the Leipzig Trade Fair . The very influential position of ND editor-in-chief within the SED nomenclature was held by top functionaries in the party and state apparatus Rudolf Herrnstadt , Georg Stibi , Hermann Axen , Joachim Herrmann and Günter Schabowski . In contrast to the other GDR daily newspapers , New Germany had a larger format and above-average paper and print quality.

Western governments perceived the New Germany as the diplomatic voice of the SED.

Before German reunification , the ND had a circulation of one million copies, making it the GDR daily newspaper with the second highest circulation after the young world . After that, the circulation sank continuously to a sold circulation of currently 19,531 copies. Although all of the major daily newspapers in Germany have been affected by this for a long time, the age structure of the readership presents the ND with particularly great problems, as the majority of readers are already over 60 years old.

Editorial building of the newspaper in Berlin-Friedrichshain (until 1995; since 2005)

The newspaper appears in a federal edition and a regional edition for Berlin and Brandenburg . According to its own information, it is "the most widely distributed and read national daily newspaper in the eastern federal states". The editor-in-chief from 1999 to 2012 was the co-founder and former member of the Bundestag of the Greens Jürgen Reents , who had previously been the press spokesman for the PDS parliamentary group. From July to December 2012 he shared the office with Tom Strohschneider , who has been the sole editor-in-chief since January 2013. Reents followed Reiner Oschmann, who, together with his deputy Brigitte Zimmermann, had resigned after disputes with the management. Oschmann had already resigned from the PDS during his time as editor-in-chief. In January 2006 Olaf Koppe took over the management from Dietmar Bartsch . Since the end of October 2005, the editorial team has been working again at its old location in the publishing house on Franz-Mehring-Platz near the Ostbahnhof in Berlin, after having been based in the former Osthafen power station building on Elsenbrücke since 1995 . The pay scale of a new Germany is 60 percent below the nationwide agreement for newspapers.

In order to secure the existence of the newspaper in the long term, various models are being discussed - including the establishment of a cooperative .

The New Germany is politically close to the party Die Linke . In the self-image of the newspaper, its task is on the one hand to “give the East a voice” and, on the other hand, to view events from a “democratic-socialist” point of view - but without understanding themselves as an organ of the left or another party. The line of the newspaper is not determined by the publisher, but by the editor-in-chief. Nevertheless, numerous reports on politics and party life on the left shape the direction of the page.

In the features pages and society pages, East German topics predominate, while political topics are increasingly viewed from a mainly left-wing , pan-German perspective. Authors and opinions from related political currents also have their say. Otto Köhler , Friedrich Schorlemmer and numerous critics from the political left and the Left Party , such as the SAV , the former WASG and the autonomous spectrum, are represented with guest contributions.

Regular components of the newspaper are also advice pages, TV programs, advertisements, columns, topic pages trade unions, health, the environment, education, Europe, sport and literature. The newspaper's letters to the editor were often cited by other media as a yardstick for internal debates within Die Linke . From November 2006 to November 2008, a monthly youth supplement called Sacco & Vanzetti was added, which was also distributed independently of the newspaper to East German universities, and since March 2007 there has been a digital version of the daily newspaper, ND ePaper, which is available from 10 p.m. on the evening before Publication date can be accessed.

Research by the daily newspaper in 2011 revealed that newspaper articles that were paid for by advertisers and some were written by them were published in the regularly appearing supplement “ND Extra”, which were not marked as advertisements as required by the press laws of the federal states. These articles are also cheaper than conventional advertisements. After this was initially denied, the ND later admitted to using content from external authors when creating the “ND Extra”, but claims that these are “non-commercial associations and organizations”, which they refer to Costs for printing and distribution involved, but this does not result in "any economic dependency that could endanger the editorial independence of the newspaper." However, the publisher had also agreed to print the text of a car manufacturer.

The Federal Family Ministry under CDU Minister Schröder described the newspaper as partially left-wing extremist. At the request of the Left parliamentary group, the ministry said in 2012 as follows: “The daily newspaper Neues Deutschland occasionally shows articles with left-wing extremist references. In particular, reference is made to left-wing extremist events ”. Minister Kristina Schröder also referred to alleged reports by the Federal Office for the Protection of the Constitution, which did not exist.

With the layout and name change on July 13, 2020, a profile was taken on an all-German but no longer original East German left newspaper.

The New Germany is one of the German daily newspapers with the greatest loss of circulation in recent years. The number of copies sold has fallen by an average of 6.5% per year over the past 10 years. Last year it decreased by 14.4%. It is currently 19,531 copies. The share of subscriptions in the circulation sold is 90.7 percent. 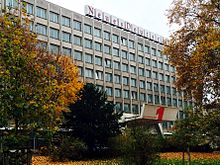 With the issue of September 30, 2011, New Germany appeared for the last time in the old design. The relaunch was accompanied by a change in the spelling of the newspaper's name: With the October 1st 2011 issue, “Neues Deutschland” became the new spelling “Neues Deutschland ” . In addition, the newspaper received a completely revised design and a new newspaper header.

Another revision of the appearance took place in October 2013.

In 2015, the newspaper received a Lead Award in bronze in the Newspaper of the Year category . The special edition Thank you Liberator! on the occasion of the 70th anniversary of the victory over Nazi Germany received an award in the category contribution of the year .