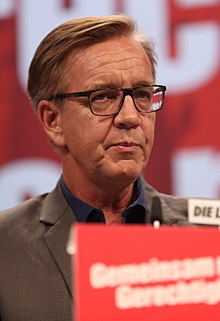 Dietmar Gerhard Bartsch (born March 31, 1958 in Stralsund , GDR ) is a German politician ( Die Linke ). He is a member of the German Bundestag and has been co-chairman of the left-wing parliamentary group in the German Bundestag since October 13, 2015, initially together with Sahra Wagenknecht and since November 12, 2019 together with Amira Mohamed Ali . As such, he was opposition leader from 2015 to 2017 . He was previously the federal treasurer of the PDS ,Federal Managing Director of the Left Party and Second Deputy Group Leader. He is counted among the moderate, reform-oriented party wing. For the general election in 2021 he appears as 2017 to as co-lead candidate of the left.

After graduating from high school with distinction in 1976 at the EOS Franzburg , Bartsch did his basic military service in the then Paratrooper Battalion 40 in the National People's Army from 1976 to 1978 .

From 1978 he graduated from the University of Economics in Berlin-Karlshorst studying economics , which he in 1983 as a graduate economist ended. He then worked in the commercial area of ​​the central body of the FDJ Junge Welt .

From 1986 to 1990 he was an aspirant at the Academy for Social Sciences at the Central Committee of the CPSU in Moscow . In 1990 there his doctorate to Dr. rer. oec. with work distribution relations under the conditions of an intensification of the socialist economy («Распределительные отношения в условиях интенсификации социалистикой экононоской экононо). In March 1990 Bartsch returned to the young world as managing director . After the failed return to the Bundestag in 2002, Bartsch initially worked as a management consultant . From May 2004 to December 2005 Bartsch was managing director of the daily newspaper Neues Deutschland .

Dietmar Bartsch lives separately from his wife and has two children.

In 1977 Bartsch became a member of the SED . In 1989 he was one of the founders of the Young Comrades Working Group (AGJG) at the extraordinary party congress of the SED-PDS. From 1991 to 1997 Bartsch was Federal Treasurer of the PDS and was then elected Federal Managing Director. For the federal elections in 2002 he was campaign manager of the PDS and together with Gabi Zimmer , Petra Pau and Roland Claus one of the four top candidates at the federal level. When the PDS then failed at the five percent hurdle and only moved into the Bundestag with two directly elected MPs, his internal party opponents demanded that he resign as federal manager. At the Gera party congress in October 2002, he withdrew his renewed candidacy for this office after Gabi Zimmer had previously been confirmed as party chairman . His successor was Uwe Hiksch .

Immediately afterwards, the so-called “guard book affair” caused a stir. According to the head of a security company and an entry in the guard book, the deputy PDS federal chairman Diether Dehm is said to have given instructions that Bartsch, former federal manager of the PDS, did not remove any documents from the house. Dehm denied having issued such an instruction. The affair contributed to Gabi Zimmer's early resignation in the summer of 2003. In October 2005, Bartsch was proposed again by party chairman Lothar Bisky as federal manager of the PDS and in December 2005 was re-elected to this office by the federal party congress. Since June 2007 he has also been the federal manager of the new party Die Linke, which emerged from the merger of PDS and WASG .

At the beginning of January 2010, Dietmar Bartsch was accused by Gregor Gysi, among other things, of having harmed party chairman Oskar Lafontaine by making targeted statements to the Spiegel . Bartsch denied this; he had neither behaved disloyally nor brought himself up for discussion as a successor. Bartsch announced after the following struggle for direction that he would initially remain Federal Managing Director, but not run again as Federal Managing Director at the upcoming party congress in May 2010. Caren Lay and Werner Dreibus were then elected as his successors .

Since January 21, 2010 Bartsch was deputy chairman of the left parliamentary group in the Bundestag. In August 2011, he distanced himself from a letter of congratulations that Die Linke - signed by the two party leaders Lötzsch and Ernst - had sent to the former Cuban President Fidel Castro on his birthday. After some members of the left boycotted a minute's silence for those who died in the Wall, Bartsch suggested that supporters of the building of the Wall should leave the party.

At the end of 2011, Bartsch declared his intention to run for party chairman. After Oskar Lafontaine had also considered running, but Bartsch did not change his intention, Lafontaine abandoned his intention. At the party convention of the Left in June 2012, Bartsch finally lost in a candidacy to fight against the Baden-Württemberg trade unionist Bernd Riexinger , who is close to Lafontaine and, unlike Bartsch, had announced his candidacy only two days earlier. Bartsch received 251 and Riexinger 297 votes.

Bartsch belongs to the party wing of the so-called reformers and joined the forum for democratic socialism in the course of the federal meeting in June 2014 . After the previous parliamentary group chairman, Gregor Gysi, announced on June 7, 2015 at the federal party congress of the Left in Bielefeld , that he would retire from this office for the autumn of that year, Bartsch declared himself ready a few days later to take over from Gysi's dual leadership together with Sahra Wagenknecht .

In September 2015 Die Welt reported on leaked documents that Bartsch had created and in which he had members of his own 44-strong party executive categorized according to political orientation or allegiance. The people were assigned three different letters: Z for "reliable", U for "independent" and L for "Lafodödel", where Z stands for loyalty to Bartsch himself or an accepted political line, and "Lafo dödel " is a derogatory term for represents the supporters of his inner-party opponent Oskar Lafontaine . Bartsch is said to have initiated the creation of the files by a henchman three years earlier. In the underlying correspondence, party leader Bernd Riexinger was also given the nickname " Ratzinger ". After its publication, the report caused significant irritation and criticism after Die Welt had confronted various left-wing politicians directly with the documents. Gregor Gysi is said to have received the dossiers directly from Bartsch and reacted negatively.

Shortly after the World Report, the Tagesspiegel published a controversial account. Accordingly, it is said from party circles that there was no "research". Instead, Gregor Gysi, as parliamentary group leader, is said to have asked his deputy Dietmar Bartsch himself after the party conference in summer 2012 to draw up a corresponding list of the newly elected party executive committee. According to the illustration, L could also have been an abbreviation for "links". Bartsch himself stated that he only used the word “Lafodödel” in a single email.

Bartsch was from 1998 to 2002 and has been a member of the German Bundestag again since 2005 . He has always entered the Bundestag via the Mecklenburg-Western Pomerania state list.

See also : Observation of the party Die Linke by the protection of the constitution

With regard to the classification of the German Democratic Republic as an injustice state , Bartsch stated the following: “It is indisputable that there was serious injustice and victims of it in the GDR. It is also undisputed that the GDR also had constitutional areas. That is why I do not apply the term injustice state to the GDR. He is not an argument, but a club. "

Wikinews: Dietmar Bartsch  - in the news

Chair of the left-wing parliamentary group in the German Bundestag