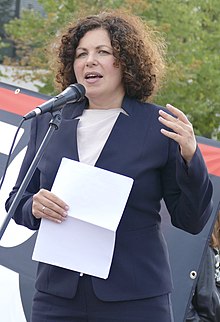 Amira Mohamed Ali (born January 16, 1980 in Hamburg ) is a German politician ( Die Linke ) and has been a member of the German Bundestag since 2017 . Since November 12, 2019, she has been chairman of the Left Party in the Bundestag together with Dietmar Bartsch .

Amira Mohamed Ali grew up in Hamburg-Fuhlsbüttel . Her father is from Egypt and her mother is German . After graduating from high school in 1998 at the Johanneum School of Academics in Hamburg-Winterhude , she completed a law degree at the Universities of Heidelberg and Hamburg , where she began and completed her studies. She completed her legal clerkship between 2005 and 2007 at the Oldenburg Higher Regional Court .

She was admitted to the bar in 2008 and worked as an in-house lawyer and contract manager at an automotive supplier until 2017 . She is a member of IG Metall and the German Animal Welfare Association .

Mohamed Ali is married and has lived in Oldenburg since 2005 . She is a non-practicing Muslim .

Mohamed Ali has been a board member of the Oldenburg / Ammerland district association of DIE LINKE in Lower Saxony since 2015 . Mohamed Ali ran for a political office for the first time in the 2016 local elections in second place on the list in electoral area VI of the city of Oldenburg. The Left achieved its best result in a local election since its inception.

For the 2017 federal election , Mohamed Ali ran as a direct candidate for constituency 27 (Oldenburg-Ammerland). She was elected to number 5 on the Lower Saxony state list of her party and was elected to the Bundestag. In the 19th Bundestag she is a member of the Committee on Legal Affairs and Consumer Protection and the Committee on Food and Agriculture . She was spokeswoman for consumer protection and for animal welfare of the left parliamentary group in the Bundestag.

On November 12, 2019, she was elected as Sahra Wagenknecht's successor - alongside Dietmar Bartsch - as co-chair of the parliamentary group. She won in a battle vote against Caren Lay by 36 to 29 votes.

Like her predecessor Wagenknecht, Mohamed Ali is assigned to the left wing of her party. In contrast to Wagenknecht, however, she is clearly open to a possible red-red-green coalition .

Chair of the left parliamentary group in the German Bundestag