Simone Oldenburg (born March 22, 1969 in Wismar ) is a German school principal, state politician ( Die Linke ) and has been a member of the Mecklenburg-Western Pomerania state parliament since 2011 . She has been the chairman of the left-wing parliamentary group there since September 2016.

In June 2018 she was elected deputy party leader at the Leipzig party congress of the DIE LINKE party.

Simone Oldenburg attended school in her home town of Wismar. After graduating from high school, she first completed a teaching degree in German and history at the Leipzig University of Education , then at the University of Leipzig , which she completed in 1994 as a grammar school teacher. She then worked at the regional school in Klütz , which she later took over. 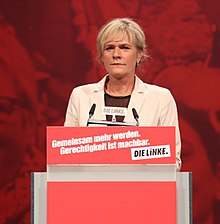 Oldenburg at the Federal Party Congress in Leipzig (2018)

Oldenburg has been a member of the municipality of Gägelow since 2004, and since 2009 also of the district council of the Northwest Mecklenburg district . In the state elections on September 4, 2011 , she received a mandate from second place on her party's state list . The direct candidacy in the regional constituency of Northwest Mecklenburg I was unsuccessful. The Left parliamentary group elected her as deputy chairman on September 27, 2011.