Thomas Hans Nord (born October 19, 1957 in Berlin ) is a German politician ( PDS / Die Linke ). From 2005 to 2012 he was state chairman of the PDS in Brandenburg. He has been a member of the Bundestag since 2009, a member of the Left Party's federal executive committee since 2012 and its federal treasurer from May 2014 to June 2018 . He was an unofficial employee of the GDR State Security .

Nord grew up in East Berlin and completed an apprenticeship as a machine and system fitter after graduating from the polytechnic high school . From 1976 to 1980 he did his military service in the People's Navy of the GDR as a non-commissioned officer. He then worked for four years as a youth club manager in Prenzlauer Berg and studied cultural studies at the “ Martin Andersen Nexö ” college . From 1984, Nord worked full-time for the Free German Youth (FDJ) as secretary for culture and sport, later as the second secretary of the FDJ district management in Berlin-Prenzlauer Berg.

After the fall of the Berlin Wall in 1989, Thomas Nord became district chairman of the PDS in Prenzlauer Berg and, in 1991, state manager of the party in Berlin. The following year he ended his full-time job and became an employee in a printing company. In 1993 he became honorary deputy state chairman of the Berlin PDS. In 1994 he organized the election campaign of Stefan Heym , whose employee he was from 1995. After Heym left the Bundestag, Nord became an employee of the PDS Bundestag group. From 1999 to 2002 he worked as a constituency employee for the Bundestag member Wolfgang Gehrcke . After the PDS was defeated in the elections in 2002, Thomas Nord became state manager of the PDS in Brandenburg and in 2005 state chairman. In 2009 he ran for the German Bundestag in constituency 63 , which he won directly with 32.3%. In the 2013 federal elections, Nord lost to the former Lord Mayor of Frankfurt (Oder) Martin Patzelt (CDU), but was elected to the 18th Bundestag via the Brandenburg state list . He was also re-elected to the Bundestag via the state list in the 2017 Bundestag election.

Thomas Nord is married to the Berlin Senator for Social Affairs, Elke Breitenbach , and has two daughters from a previous marriage. 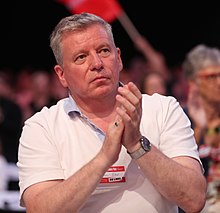 Nord at the Federal Party Conference 2018 in Leipzig

Thomas Nord became a member of the SED in 1976 and held honorary functions until 1984. In the same year, he was appointed to the FDJ district leadership as a full-time functionary of the youth association and the party.

In 1998, Nord volunteered for the Erfurt Declaration - "Stand up for a different policy". In 1999, Nord began working in Brandenburg. After honorary functions in Ostprignitz , he became regional manager of the PDS in 2003 and implemented a party reform there. In 2005 he became regional chairman and campaign leader of his party. Nord was a member of his party's delegation during the exploratory talks with the SPD after the state elections in 2004. In 2009, as state chairman, he headed the negotiating delegation of Die Linke to draw up the coalition agreement with the SPD Brandenburg. Together with Kerstin Kaiser , Matthias Platzeck and Günter Baaske he signed the coalition agreement for the red-red coalition.

Member of the German Bundestag

Nord has been a directly elected member of his constituency in the German Bundestag since 2009. There he works in the Committee on European Union Affairs . He is an alternate member of the Culture and Media Committee and the Defense Committee . He is deputy chairman of the German-Polish and German-French parliamentary groups for the left-wing parliamentary group. In 2013 he ran in the constituency of Frankfurt (Oder) / Oder-Spree district again as a direct candidate for Die Linke and was placed in second place on the party's state list.

On November 26, 2016, he was elected to second place on the state list for the 2017 federal election by the delegates' assembly of the Left Party of Brandenburg .

Nord worked from 1983 as an unofficial employee for the Ministry of State Security . Already during his four years in the army with the People's Navy , he betrayed a sailor's intention to flee. As a youth club leader, he later passed on a lot of information about colleagues and young people. Among other things, he accused some of his colleagues of "having no clear class position". He reported to a young person: she “takes an active stand against the military readiness of high school graduates”.

In March 1990, Nord made his work as an unofficial employee in connection with the local elections in Berlin public. “I was an unofficial employee of the MfS out of political conviction.” Nord also speaks of a personal failure. "Since then, I have drawn attention to this part of my biography every time I ran for an office or mandate." Nord's past was critically examined by the media several times in the course of his political career.

On February 25, 2010 the parliamentary group of the CDU / CSU applied for a review procedure according to number 3 of the "Agreement on the implementation of the guidelines according to §44c AbgG". The SPD and FDP followed suit. The group of the Greens questioned the knowledge gained from the procedure. On February 24, 2011, the hearing of the MP Thomas Nord followed. On June 30, 2011, the Committee on Election Review, Immunity and Rules of Procedure completed the review process. The check revealed a proven activity of the MP for the MfS.

The report says: “Nord was approached for the first time during his time with the People's Navy and recruited in 1984 by the Ministry for State Security . These documents show that the MfS became aware of Mr Nord in 1977, who from 1976 to 1980 did a four-year voluntary military service in the GDR People's Navy. According to a memo from a lieutenant from 1982, Mr. Nord was “contacted” from September 1978 to October 1980. He signed a declaration of commitment for the Stasi out of political conviction and worked under the code name Marc Schindler. "

As a youth club leader in Berlin Prenzlauer Berg, he reported on young people and colleagues who were critical of the GDR. With a resolution of February 28, 1984, the IM preliminary file was archived and the North committed as GMS ( Social Security Employees ) and remained so until the political change in the GDR in 1989.

Like Nord himself, the election review committee did not rule out a harmful effect on those affected. "In the investigation of the committee, however, no concrete evidence could be found that the MP Thomas Nord had harmed other people directly through his work for the MfS."