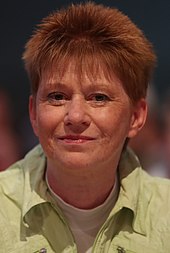 Petra Angelika Pau (born August 9, 1963 in Berlin , GDR ) is a German politician ( Die Linke ). She has been Vice President of the German Bundestag since 2006 .

Petra Pau was born in 1963 as the daughter of a bricklayer in East Berlin. After attending a general polytechnic secondary school she started in 1979, a professional education at the Central Institute of the Pioneer Organization "Ernst Thalmann" (ZIPO) in Droyßig they 1983 as Friendship pioneer director and as lower grade teacher for German and art education completed. Petra Pau worked in the profession she had learned until 1985. Then she began studying at the Karl Marx party college (PHS) in Berlin, which she graduated in 1988 with a degree in social science. Until 1990 she was an employee of the Central Council of the FDJ , which she handled after reunification . She was unemployed until 1991.

Pau is baptized and confirmed as a Protestant . She now describes herself as non-denominational. She has been married to the mathematician Michael Wolff since 1994.

In 1983 Pau became a member of the SED . From January to October 1991 she was chairwoman of the PDS district association Berlin-Hellersdorf and then deputy PDS state chairwoman in Berlin. When André Brie had to resign because of his secret Stasi past, Pau was elected regional chairman of the Berlin PDS in October 1992. She held this office until December 2001, from 2000 to 2002 she was also deputy PDS federal chairwoman . Within her party, Pau belongs to the so-called reform left and was also long spokeswoman for the Federal Working Group on Civil Rights and Democracy . 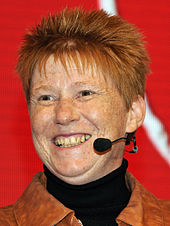 Petra Pau in the 2013 federal election

Petra Pau as Vice President of the Bundestag (2019)

From 2010 to 2015 Petra Pau suffered from spasmodic dysphonia , a disease of the voice.

Pau was the chairwoman of the Left in the NSU investigative committees of the Bundestag that were set up between 2012 and 2017 .

There was widespread public criticism that in November 2006, as Vice President of the Bundestag, Pau published an obituary notice for the former head of the GDR State Security Intelligence Headquarters , Markus Wolf .

In December 2014, Pau received over 40 death threats due to her commitment to refugees and against the protests against a refugee home in the Marzahn-Hellersdorf district, which were significantly influenced by neo-Nazis . Your home address was published in the context. At the beginning of March 2015 she was threatened in a demonstration by the self-proclaimed "Marzahn Citizens' Movement" in front of her apartment in front of the police.

Current Presidium of the German Bundestag