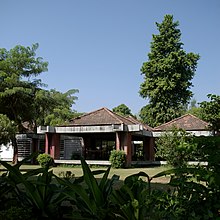 The Sabarmati Ashram in Ahmedabad where Gandhi lived

Ashram (spelling also ashram , after English ashram ) originally referred to the hermitage of an Indian ascetic , but today mostly a monastery-like meditation center in India or a place where followers of a spiritual teaching live and receive instruction.

The spiritual director and leader of an ashram is called a guru . There are also the yogis who give lectures, sing bhajans , recite mantras and say prayers.

The word comes from Sanskrit : आश्रम ( āśrama , masculine or neuter) is a word formation for śrama , which means something like "effort". The word ashram means “place of religious endeavor”.

The word āśrama in Sanskrit also stands for “stage in the life of a brahmin ”. In this case, āśrama can be translated as “period of religious endeavor”. The four life stages (ashramas) of a brahmin are: the brahmacharin (student), the grihastha (housekeeper), the vanaprastha (retreating into the forest solitude) and the sannyasin (the enlightenment seeker). In the third stage of life the Brahmin lives as a hermit in the forest and meditates. This gives the older word meaning of ashram in the sense of "hermitage of an Indian ascetic".

The word progression curves in the digital dictionary of the German language show that the word Aschram or Ashram only appeared sporadically in newspaper texts until 1971. Between 1979 and 1981 the use of words suddenly increased sharply and then fell sharply. After that, the word occurrence increased steadily again until 2010, apart from short-term fluctuations. The graph also shows that for most years ashram was the more common spelling in newspaper texts.

The first strong appearance of the word usage in the period 1979 to 1981 indicates a connection with reports on the Indian guru Chandra Mohan Jain (1931-1990), who was called Bhagwan from the 1970s and Osho shortly before his death . Bhagwan founded his first ashram in Poona in 1974. Very soon more and more followers from the West traveled to Poona for short or even long stays and reported back home about their experiences, as did Jörg Andrees Elten with his bestseller Completely relaxed in here and Now! Diary about my life with Bhagwan in Poona (1979). In 1981 Bhagwan moved to the United States. At Antelope , Oregon , his followers quickly built a town that was home to around 7,000 people. This Bhagwan commune went under in various scandals in 1985 and disbanded.

Followers of Bhagwan and Osho founded numerous meditation centers around the world. Such centers were unofficially called ashram because of their spiritual connection to India . The same applies to individual meditation or yoga centers in western countries that have no relation to Osho. The word ashram therefore no longer exclusively refers to meditation centers in India.