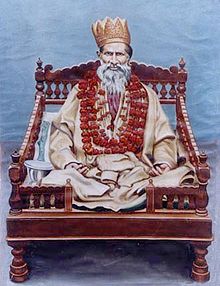 Radhasoami (spoken for example Radha-Swami) is the name of God in a certain form of the Sant Mat movement (path of the masters). The followers of this religion are mostly called Radhasoami Satsangis .

The belief in Radhasoami, who comes from India , is monotheistic and is part of the Bhakti tradition. Because of his closeness to the teachings of Kabir Sahib, Guru Nanak and others, he is also related to Sikhism . His followers refer to Shiv Dayal Singh , called Soamiji Maharaj (1818–1878). The religion, which was founded in 1861 and has since split into several branches, has around 3 million members worldwide. However, according to its own information, the Beas branch alone has 4 million members worldwide.

The Radhasoami beliefs include the existence of God , the unity of the essence of God with the soul of man, and the belief in an afterlife . According to the doctrine of faith, man consists of the three parts body, mind and soul, whereby the first two are mortal, but the soul is immortal. Since the essence of the human soul ( Atman ) is the same as the essence of God ( Param Atman ), the human being represents a microcosmic image of the entire creation.

According to the Radhasoami doctrine, the body does not have a soul, but the soul has a body. The otherworldly, spiritual reality is the real one. The soul is already in heaven ( Sat Lok ), it is outside of space and time, even if it is not aware of it and considers the physical world to be real. However, people already have access to spiritual reality now and during their lifetime: The soul has the ability to see and hear spiritually "inward". Under the guidance of a master who has already mastered and can impart the necessary technology, every person can learn this “journey of consciousness inwards” through meditation , see the “inner light” and hear the “inner sound”, the signs of the “inner life” - and energy flow ". This meditation technique is called Surat Shabd Yoga ("union with God").

Fundamental to the religious practice of the Radhasoami tradition is guru worship and fellowship with a spiritual teacher in satsang . It is believed that God (Radhasoami) from time to time sends holy and enlightened souls to earth to instruct people in spiritual things (e.g. Buddha , Jesus , Meister Eckhart , Guru Nanak etc.) that each Religion of the world is a holdover from the teachings of such a teacher, and that the gurus of their religion are such God-sent enlightened teachers too. These “living masters” are called Satguru (literally “true teacher”), also often Sant Satguru ( Sant means something like saint ).

The founder of the religion Shiv Dayal Singh is regarded as the incarnation of Radhasoami. This differs from the teaching of Guru Nanak and Sikhism, according to which the highest deity never incarnates in space and time. By the time he died in 1878, he already had several thousand followers, but no designated successor. Several of his disciples emerged as successors, and six of them successfully carried the religion on in separate branches.

In the book of Sarbhajan (by Radhasoami Beas) the last instructions from Swamiji before he left the body read: “My path is that of Satnaam Anami, while Rhadasoami is the path of (Raj) Saligram. Let him continue with that too. "

In each branch of religion there is usually only one Satguru - when that Satguru dies, a successor will be recognized by the community as the new Satguru. When there is disagreement about the successor, as has happened several times in the past, new branches split off within the movement. Each branch thus has its sequence of the Satgurus that it regards as holy.

The branch with the most followers today is that of Baba Jaimal Singh Ji Maharaj (also called Babaji Maharaj ), who founded his Satsang in Beas , Punjab ( Radha Soami Satsang Beas ). Another branch is based on the successor Raj Saligram and kept its center in the city of Agra .

Radhasoami-Satsangis live strictly lacto-vegetarian and see their spiritual development as the main goal of humans. In addition to the consumption of meat and eggs, they also reject alcohol and any intoxicants . In order not to distract from the goal of spiritual development, worldly possessions should be limited to what is necessary. There are ashrams in which the Satsangis can live near their Satguru.

"Radhasoami" is also used as a greeting phrase among members of the religion . Indians like to use the Namaste greeting, which is common in India .

The current living master of the Beas branch is Gurinder Singh Dhillon (born 1954 in Punjab). Before he became a religious master, he worked as a businessman in Spain. His family, Dhillon, are among the richest families in India; it is in 400th position.

Gurinder Singh calls for living organ donation . His sons are CEOs in companies that earn money with organ donations, such as Logos or Religare. Critics complain that Gurinder Singh used his influence to increase his own wealth and that of his family.