Dancer in a sari performing the Namaste greeting gesture 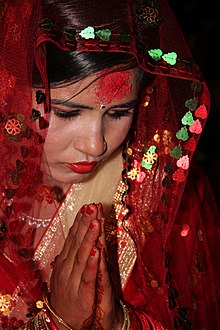 Namaste (  [ nʌmʌsˈteː ] , also Namasté ; Sanskrit / Hindi / Nepali ( Devangari script ) नमस्ते namaste ) is a greeting and gesture ( Mudra , Sanskrit: "gesture") that is widespread among Hindus in India and some other Asian countries .

Namaste literally means "bow to you". It is a combination of náma (Sanskrit "bow") and -aste ("to you").

The greeting appears for the first time in the Rigveda and is also passed down in Avestan as nəmasə.tē .

When performing the gesture, the palms of the hands are usually brought together, placed on the chest near the heart, and the head slightly bent. While the Namaste greeting is usually pronounced in the western world , it is not necessarily the case in India.

An even deeper respect, for example towards spiritual teachers, is expressed by raising the clasped hands and placing the fingertips of both index fingers on the place between the eyes. According to Hindu doctrine, this is where the mystical “third eye” is hidden.

In the various languages ​​of the Indian subcontinent, the actual act of this greeting gesture is called Namaskaram , Namaskara or Namaskar ; the clasped hands are also known under the mudra terms Anjali , Atmanjali or Hrdayanjali .