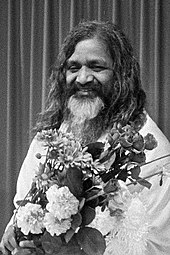 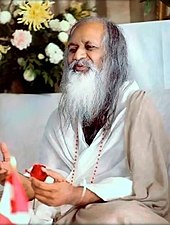 According to unsecured information, Maharishi Mahesh Yogi was born the third of four children of a Hindu Kayastha family in the small town of Chichli near Gadawara near Jabalpur , India. His birth name was Mahesh Verma Shrivastava. Other sources give Mahesh Prasad Varma as the birth name.

He studied physics and mathematics at the University of Allahabad and around 1950 became a student and secretary of Swami Brahmananda Saraswati , who had been Shankaracharya for the north Indian Jyotir Math , Himalaya , from 1941 to 1953 . Swami Brahmananda gave him the name Bal Brahmachari Mahesh . Maharishi is controversial among today's Shankaracharyas. Since he was not ordained a monk, he did not call himself "Swa mi". After 1953, Maharishi is said to have lived in the Himalayas for a few years before he founded the Spiritual Regeneration Movement (SRM) in Madras at the end of 1958 . In doing so, he referred to a spiritual commission from Brahmananda. Since his SRM was not well received, he left India and traveled via Kuala Lumpur , Singapore , Hong Kong and Hawaii until arriving in San Francisco in 1959 . In 1960 he visited Germany for the first time.

In his two small writings, The Thirsty Fish in the Lake (1961) and The Treasury and the Market (1962), he developed his basic idea that there is a meditation technique as a simple, comfortable way to happiness and fulfillment. This meditation technique leads to the “source of creation”, enables “cosmic consciousness” and enables people living in the modern world to persist in parallel in the realm of the absolute and relative and to act continuously without errors. This means that all problems can be solved, which automatically transforms humanity as a whole towards the divine. This simple meditation had been forgotten and was only called back to mankind's memory by innovators like Krishna , Buddha , Christ and Guru Dev . With this religious message rooted in Hinduism, Maharishi Mahesh Yogi first went public with his so-called Transcendental Meditation (TM) in 1955.

His book The Science of Being and the Art of Life (1963) was an attempt to convey his religious message especially to people in the West who were “believers in science”. In his commentaries on the first six chapters of the “ Bhagavadgita ” published in 1966, on the other hand, he justified his new path of meditation and his spiritual roots on the basis of Indian tradition as a revival of old knowledge.

The TM had its first successes in the mid-1960s, primarily among students. In 1965 he founded the Students International Meditation Society (SIMS). Shortly thereafter, all the already established branches of work and activities of the Maharishi movement came together under the name International Meditation Society (IMS). In the spring of 1968 he brought together pop and film greats such as the Beatles , Beach Boys , Donovan , Clint Eastwood and Mia Farrow for meditation courses in India. The initiation of the Beatles was used for advertising purposes. However, the Beatles soon left and distanced themselves in May of the same year with harsh criticism of Maharishi and their TM experience. Film director David Lynch has also campaigned for Maharishi's cause since 2000 . In addition to transcendental meditation, he was also known for his interpretation of ancient Indian texts and for the so-called " Yogic Flying ".

He barely survived a poison attack on August 1, 1991. A perpetrator was never convicted.

In a speech on January 11, 2008, he announced his withdrawal from day-to-day business. On February 5, 2008, as one witness reported, he is said to have “put himself in the perfect yoga position” and “fell asleep peacefully”. His body was transferred to Allahabad , India on February 9 , public display and cremated with state honors on February 11. Tens of thousands said goodbye. The ashes of the deceased were given to several rivers in India and also distributed in 192 countries.

His successor is Maharaja Adhiraj Rajaraam , real name Tony Nader, a Lebanese neurophysiology professor. Nader was crowned "First Regent of the Global Country of World Peace" by Maharishi Mahesh Yogi in 2000 and was given the honorary title Nader Raam . For the continuation of Maharishi's teaching, he announced the construction of 48 "Towers of Invincibility" in 48 countries.

Maharishi became an icon in hippie mysticism of the 1960s largely because of the Beatles. His teachings also gained medical recognition for the revival of an ancient Indian yoga technique under the (new) name of Transcendental Meditation. He started doing this in 1955 and brought the practice to the United States in 1959. The movement only gained greater popularity when the Beatles attended one of his lectures in Wales in 1967, only to travel to him in Rishikesh in northern India a year later . However, the encounter between the “Great Seer” and the superstars did not go smoothly. The argument broke out after a friend of John Lennon's , "Magic Alex", spread rumors that Maharishi Mahesh Yogi had sexually molested Mia Farrow - an accusation Farrow never confirmed. George Harrison and Paul McCartney denied, Harrison later apologized to Maharishi Mahesh Yogi.

In retrospect, the book author Deepak Chopra calls him “one of the most important personalities of the century”, ex-Beatle Ringo Starr “one of the really wise men I have met in life”. For Paul McCartney he was "a great person who worked tirelessly for people and the cause of unity." According to film director David Lynch , Maharishi Mahesh Yogi “laid the foundation for global peace”. Rolling Stone magazine , in retrospect, called him a "great spiritual leader."

The following paragraphs are not adequately provided with supporting documents ( e.g. individual evidence ). Information without sufficient evidence could be removed soon. Please help Wikipedia by researching the information and including good evidence.

In October 2000 Maharishi Mahesh Yogi founded the Global Land of World Peace (Sanskrit: Vishwa Shanti Rashtra ) as a "country without borders for all peace-loving citizens of the world". The Global Country of World Peace is not a country in the traditional sense because it does not have its own territory . According to Maharishi, the purpose of this country is to create global peace by uniting all nations in happiness , prosperity , invincibility and perfect health , and promoting rich diversity in the family of nations. The global land should create heaven on earth by raising the quality of life of each individual and bringing full fulfillment and prosperity into enlightenment . The currency of the Global Country of World Peace is the Raam, which is in limited circulation in the Netherlands and the USA.

The many other organizations founded by Maharishi include the Spiritual Regeneration Movement, 1957, the Students International Meditation Society (SIMS, 1968), the World Government of the Age of Enlightenment (1976), the Natural Law Party ( formerly represented in many countries) ( Natural Law Party, 1992) and Global Administration through Natural Law (1997).