Ramana is a redirect to this article. Further meanings are listed under Ramana (disambiguation) . 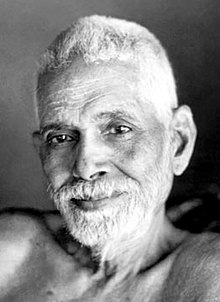 Ramana Maharshi lived in silence, but answered questions from spiritually interested people. He was a representative of the Advaita-Vedanta of the 20th century and recommended the Atma Vichara method , the exploration of the self based on the question: “Who am I?” To those seeking advice who asked for an exercise . Dozens of Western Satsang teachers refer to him today and see him as a role model.

According to his stories, Venkataraman / Ramana had a formative experience at the age of 16: During a violent fear of death, he was concerned with the question of what dies in death. He had come to the answer that the body may die, but not the self or its consciousness. He later said of the experience: “The self was something very real, the only real thing in my current state, and all of my body's conscious activity was focused on this self. Since then, the fascinating power of this self has remained the focus of my attention [...]. Since then, being sucked into the self has continued without interruption. Other thoughts appear and disappear again, similar to the notes of a piece of music, but the self is always present as a keynote among the other notes and mixes with them. Even when my body is occupied with talking, reading or whatever, my whole being is no less self-centered. Before this crisis, I was unable to perceive the self clearly, and I was not consciously attracted to the self. "

Six weeks after this experience, Ramana set out for Mount Arunachala , which is considered sacred by Hindus , where he spent the rest of his life. At first, contemporary witnesses recall, he sat in an underground, dilapidated shrine ( Pathala Linga ) of the Arunachaleswara Temple in Tiruvannamalai , where he was so absorbed in samadhi that he did not notice how ulcers and pus were forming on his thighs. Another yogi, Sheshardi Swami, recognized the potential of the young yogi, brought him into the light of day and took care of his body. Soon after, he moved to the mountain, where he lived in the Virupaksha Cave from 1899 to 1916 .

In 1898 his mother found out about his whereabouts and tried unsuccessfully to persuade him to come home. Up to this point, Ramana was still not ready to break the silence that he had kept since his departure for Arunachala. But visitors were able to get him to answer questions in writing. The book Nan Yar (Eng. “Who am I?”) Contains these questions and, according to Ramana's statement, encompasses the “full quintessence” of what he would have had to say all his life. He called it "self-founding". Here in the Virupaksha Cave , the well-known Sanskrit scholar Vasishta Ganapati Muni also visited him, who gave the name Ramana Maharshi , composed of his maiden name Raman and the, to what had been known as Brahmana Swami ( Brahman Swami ) or Mouna Swami (silent Swami) Honorary degree Maharshi . From his teachings he wrote the Ramana Gita and made him known to a wider circle in India.

From 1916 to 1922 Ramana lived with followers and his mother in Skandashram, which is located a little above the cave on the mountain. In 1922 his mother fell ill and died. An ashram was built around his mother's grave at the foot of the mountain , in which he lived from then on. The ashram grew and attracted many guests for darshan , an encounter with Ramana. The visitors included religiously or politically well-known people from both India and Europe. So were about W. Somerset Maugham and Paul Brunton among the guests. The latter made him known to a wider audience in the West with his book A Search in Secret India (1934).

In 1949, a cancerous tumor was discovered on his arm. Ramana had four operations but refused to have the arm amputated. When he died on April 14, 1950, he assured those who remained: "What I am cannot die because it was never born."

The teaching of Ramana Maharshi is based on the idea that knowledge of the true, divine nature of man (the "self") is obscured by his mind. Almost all intellectual activities, whether consciously or unconsciously, serve to establish and maintain a personal center, the "I" concept. A main focus of spiritual practice ( sadhana ) should be to expose the illusory character of this center. When it collapses completely, the real self comes out permanently.

Most often, Ramana Atma recommended Vichara - the exploration of the self - and Bhakti - the devotion to God.

Atma Vichara ( Atma = soul, "self", Vichara = questioning, exploring, exploring) is a method that Ramana developed during his time as a young cave hermit and often referred to as the most direct way to "annihilate" the self. It can be practiced without initiation or guidance from a teacher and can also take place in everyday life at any time. In doing so, by constantly asking about the origin of the self-conception and concentrating on the "spiritual heart" (hridaya) - two fingers' breadth to the right of the middle of the chest - one should penetrate into the self: "You [...] believe, that you are the ghost. But the mind is nothing else than the thoughts. Behind every single thought there is a main thought, the "I" that you are yourself. Let us call this "I" the first thought. Hold on to this I-thought and ask what it is. When this question gains strength in you, you cannot think of anything else. When you look seriously for the self, the I-thought disappears. Something deeper takes possession of you, and that is not the "I" that started the search. It is the real self, the real meaning of "I". It's not the ego. It is the highest being. […] This research is initially also a mental, a spiritual process, but in the long run it destroys all mental processes including itself, just like the stick with which the burning pyre is moved, when the fire burns wood and corpse consumed. With this one attains the realization, the realization of the self. This dissolves the illusory “I” thought - the feeling of being a certain personality. ”(Quoted in Ebert 2003: 198).

By bhakti, Ramana understands - unlike in the common sense, according to which bhakti denotes the worship of a personal God and the devotional service to him - the unconditional surrender to fate. This only works if you let go of all belief in individuality and free will: “The other way is to kill the ego by submitting yourself completely to the Lord, realizing your helplessness and always saying: 'Not me, but you, oh Lord! ', Giving up any thought of' I 'and' mine 'and leaving it entirely up to the Lord what he may do with you. Surrender is not complete as long as the devotee wants this and that from the Lord. True devotion is love of God for love's sake and for nothing else, not even to obtain salvation. ”(Quoted in Devaraja Mudaliar: Diary of Conversations with Ramana Maharshi. Books on Demand, 2011, p. 218). Elsewhere it says: “consecrate all your deeds to Him, whatever you may call Him. Always keep Him in the background. Then the feeling “I am the doer” will disappear and instead the feeling “I am the instrument of the Lord” will take its place ”(Ramana Maharshi 2007: 28).

Ramana never claimed to be a guru . Nevertheless, many of his disciples declare that they experience him as a Sat-Guru ("completely enlightened master"). Ganapati Muni, Annamalai Swami, HWL Poonja and Robert Adams are among these. HWL Poonja is considered the most famous student in the West.