This article is about the musician. For his debut album see Stephan Remmler (album) .

Stephan Remmler (born October 25, 1946 in Witten ) is a German singer , composer and music producer . He became known as the singer of the group Trio , which was successful with the song Da Da Da in 1982. 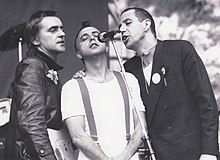 Remmler's father worked as an auditor at the American embassy in Bad Godesberg. When the father was killed in a traffic accident in the mid-1950s, the family moved to live with the mother's parents in Bremerhaven . The Capitol Cinema there belonged to the mother's father. In Bremerhaven Remmler came into contact with the music of Elvis Presley , Remmler's first record Heartbreak Hotel impressed Remmler, according to his own statement, incredibly. Remmler was enthusiastic about the soldier channel AFN , which broadcast a US radio program from Bremerhaven. In 1958 Remmler was one of the onlookers who cheered Elvis Presley, who was conscripted, at Columbuskaje. At the annual German-American folk festival in Bremerhaven, Remmler interested the country bands in the Red Dog Saloon. Remmler later visited the American "Teenage Club" in Bremerhaven. In the mid-1960s, "Seebeck am Markt" regularly organized singing competitions in Bremerhaven. Remmler won three to four times in a row and was ultimately only allowed to perform out of competition. Here he made contact with Delf Jacobs, who convinced him to join his beat band "Bottles". In 1966 "Bottles" was renamed "Just Us". “Just Us” was a guest for 14 days at the Hamburg Star Club , the guitar was played by Kralle Krawinkel , who later became trio guitarist. After graduating from high school in Bremerhaven, Remmler was drafted into the German Armed Forces, he did his military service in Cuxhaven. After completing his military service, Remmler took up a teaching degree in Hamburg.

In the 1970s, Stephan Remmler appeared as a pop singer under the pseudonym "Rex Carter" . He then became a secondary school teacher in Bevern (Holzminden district) and music lecturer at the University of Oldenburg .

In 1979 Remmler founded the group Trio together with Kralle Krawinkel and Peter Behrens and was its lyricist and singer. With Trio he achieved the world hit Da Da Da I don't love you you don't love me aha aha aha and had considerable success with other titles at least in Germany in the course of the Neue Deutsche Welle : Anna - Lassmichrein Lassmichraus , Herz ist Trumpf or Bum bum could each other place in the German top 10.

During a creative break with Trio (1984) he published the single Feuerwerk (also internationally in English, Spanish, French and Italian) as "Stephan & Nina" together with nine-year-old Angela Smecca and played the narrator in the classic work Peter and the Wolf under the direction of John Williams .

After Trio broke up in 1986, Remmler began a solo career. He wrote and produced his music almost without exception on his own. The first single of his solo career, No Stars in Athens, was his most commercially successful. The second single Everything has an end, only the sausage has two unexpectedly became a carnival hit . Both singles reached third place in the German single charts. Since then he has not been able to build on these successes. The English version of No Stars in Athens ( I Don't Go to USA ) reached number 1 in the Philippines .

As a result, he released a number of albums, of which only his second album Lotto (1988) could place in the charts. From 1989 onwards Remmler withdrew to a large extent from the music business, as he had now become a father and devoted himself more to his family life. Therefore, the best-of compilation 10 Years at Stange appeared first , which, in addition to the hits of his solo career, also contained some titles from his time with the trio. 1991 followed with Project F - In Search of the Treasure of Lost Emotions, the third studio and at the same time first tribute album , which only contains cover versions by Freddy Quinn . A new album announced for 1992 with original compositions called BarbarellaMortadellaohneTeller was withdrawn at short notice and appeared in 1993 in a revised form under the name Vamos . Remmler completed his second and so far last tour of Germany for this album. Remmler released recordings from the tour on his live album HÜH! In 1994 he played the Kratermann in the musical Tabaluga by Peter Maffay . After changing the record company to MCA Records , another studio album Amnesia followed . Remmler then retired into private life for about ten years.

In 2003 he composed and produced an album together with his three sons Cecil, Jonni and Lauro . The album itself remained unreleased because the formation lost their record deal at short notice. However, two previously released singles, including Everybody Cha Cha , reached high chart positions in Germany. In this context, Remmler's sons completed a series of TV appointments in which their father accompanied them in the background, but did not appear in front of the cameras himself.

Another solo album followed in 2006. As a record company he chose the rather small label of his friends Inga Humpe "it.sounds". The album 1, 2, 3, 4… , which Remmler had produced together with his eldest son Cecil , could only be placed at the bottom of the German album charts.

In 2007 he composed the soundtrack with Cecil to the film Vollidiot based on the book by Tommy Jaud , which was released in April 2007. In this context, Remmler released together with Nena and Oliver Pocher , who plays the leading role in the film, the single Ich kann nix für den . This song is a German version of the song Young Folks by Peter Bjorn and John , for which Remmler wrote and sang a German text. The song reached the top 10 of the German single charts.

Since then, Remmler has only worked occasionally on musical projects. In 2010 he appeared on MTV Unplugged as a guest of the Berlin rapper Sido . Both sang together the song Da da da . He released the same song in collaboration with Señor Coconut . In 2014 Remmler took part in a version of No Stars in Athens by the band LaBrassBanda on their album Kiah Royal and also appeared in the official video. In 2010 he read the audio book version of Keith Richards ' autobiography Life .

In 2015 Remmler's children's book Heinrich, Schweinrich and the flying crocodiles was published .

From 2013 to 2016 he composed and produced hit songs for Sarah Jane Scott , the partner of his son Cecil, whose album I look into your eyes was released in April 2016.

Remmler only produces music that he likes himself - even if this does not meet the musical expectations of his fans. For example, in 1991 he released an album that consisted exclusively of cover versions of Freddy Quinn songs and that did not meet with approval from either his fans or Freddy Quinn himself. Remmler about this in an interview in 2006: "I can afford my music."

On February 19, 2009 the premiere of a music theater evening by the Junge Theater Bremen took place in the Schwankhalle in Bremen under the title "On top of the mountain - with Stephan Remmler songs in search of the treasure of lost feelings" was conceived by the director Carsten Werner and the singer and actor Denis Fischer exclusively from Remmler's songs.

Remmler's song Women are evil has been interpreted as misogynistic by some radio stations . In the mirror reference was made to the ironic side of the song.

Stephan Remmler managed to win over well-known musicians for his productions. He played with Klaus Voormann , Carl Carlton , Bertram Engel , Status Quo , Ken Taylor , the Toten Hosen , Lydie Auvray and Curt Cress . On 1, 2, 3, 4 ... he had his compositions a. a. by Deichkind , Seeed , Thomas D , 2raumwohnung and Mathias Halfpape revise and interpret. Occasionally Remmler was also active as a producer for other artists, such as B. Humpe & Humpe and DÖF .

Remmler's live appearances were relatively rare, as he says he prefers to work in the studio. With a total of eight studio albums, he only had two tours.

Stephan Remmler worked as an actor in films, the success of which, however, was rather moderate. He played a double role in the trio film Three Against Three (1985) and a policeman in the TV production War of Tones (1987) with Holger Czukay . He was also heard as a voice actor for the talking computer "Edgar" in the US film Electric Dreams (1984).

Remmler would have liked to see his old band Trio reunited by his own admission, but this attempt failed with Remmler's vague explanation: "It would have been good if it had been good."

Stephan Remmler lives with his family on Lanzarote and in Basel . He is married to the interior designer Hilana Raitzik-Remmler, a native of Brazil. The two sons, Cecil Jonni Lauro , briefly formed a band in the early 2000s that made it into the music charts . Cecil Remmler then successfully began a musical solo career.

For titles with a trio, see Trio discography