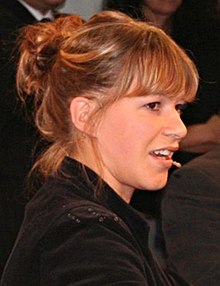 Franka Potente grew up as the older of two children of a teacher and a medical-technical assistant in Dülmen . There she went to the Clemens-Brentano-Gymnasium . Your Italian surname goes back to the Sicilian great-grandfather, a roofer who came to Germany in the 19th century.

At the age of 17 she was an exchange student in Texas . In 1994 she graduated from high school in Dülmen and began training as an actor at the Otto Falckenberg School in Munich , which she broke off after two years. She went to New York and took a course at the Lee Strasberg Theater and Film Institute . In a Munich bar, a caster gave her her card. Potente called her a week later, which led to her first leading role in Hans-Christian Schmid's film Nach Fünf im Urwald . The French director Henri Helman brought her to France in 1997 for a leading role in Une vie pour une autre alongside Line Renaud .

Her breakthrough to star came in 1998 with her title role in Tom Tykwer's film Run Lola Run , which attracted international attention. Another collaboration with Tykwer in Der Krieger und die Kaiserin in 2000 proved to be artistically productive . This was followed by some appearances in Hollywood films, such as 2001 Blow with Johnny Depp and 2002 The Bourne Identity with Matt Damon . Potente, who had moved to Los Angeles because of her US career , was not satisfied with the quality of the roles offered there.

In 2004 she moved back to Berlin . In the same year she participated with the punk musician Bela B. of the band The Doctors in the anti-fur campaign of the animal rights organization PETA . Based on her correspondence with her colleague Max Urlacher during her time in Los Angeles, a book was published in September 2005 under the title Los Angeles - Berlin. A year. She wrote a screenplay for the short film The Deadly Deadly Nettle within three days and later directed it. The 43-minute film is about a comedic love story on Armistice Day in 1918 and uses narrative styles from early silent film cinema. The world premiere took place at the Berlinale 2006. In the same year she starred in Oskar Roehler's Michel Houellebecq filming Elementary Particles and shot the film Under the Australian Sun , the directorial debut of Australian actor Richard Roxburgh, alongside Eric Bana . For the film she was nominated for the 2007 AFI Award of the Australian Film Institute for Best Actress.

From the middle of the sixth season of the US series The Shield , she played the daughter of an Armenian mafioso who is involved in his dark machinations. In 2008 she was the German-born guerrilla fighter Tamara Bunke in Steven Soderbergh's film Che - Guerrilla about the life of Ernesto Che Guevara . In the film adaptation of the successful historical novel Die Päpstin planned by Bernd Eichinger , Potente was originally intended for the title role of Popess Johanna as long as Volker Schlöndorff was director. In May 2008, however, it was announced that the role would go to her colleague Johanna Wokalek .

2008 was Potente for by Wolfgang Panzer staged television adaptation The bridge of the anti-war novel of the same The bridge of Manfred Gregor front of the camera, a remake of the successful movie The Bridge of Bernhard Wicki from 1959. Also in 2008, the Munich Film Festival presented the film The chase before , in which she plays the Nazi hunter Beate Klarsfeld .

In May 2009 she published her second book Kick Ass - The alternative workout together with her personal trainer Karsten Schellenberg . In September 2009 Potente was at the beginning of the 6th season of the series Dr. House to be seen as a guest star in the double episode "Broken" in a bigger role. In August 2010 her first volume of short stories, "Ten", was published. In September 2010 she appeared as a guest star in the US series Psych in the episode "One, Maybe Two, Ways Out" as the US spy Nadia. In 2012 she took on the role of Anne Frank in the American Horror Story series . In 2014 she played Eleanore Night on the side of Diane Kruger and Demián Bichir in the US series The Bridge - America .

After relationships with, among others, the German film director Tom Tykwer and the American actor Elijah Wood , Franka Potente has been married to the American actor Derek Richardson since 2012 , with whom she lives in Los Angeles and has two daughters born in 2011 and 2013.