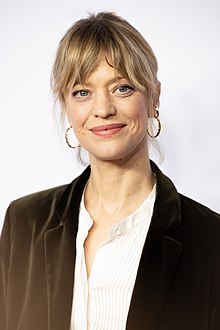 Heike Makatsch (born August 13, 1971 in Düsseldorf ) is a German actress , singer , voice actress , author , audio book speaker and television presenter . After a successful career as a presenter for youth programs, she was able to establish herself as a multi-award-winning actress.

Heike Makatsch is the daughter of a primary school teacher and the former German national ice hockey goalkeeper Rainer Makatsch . She attended the Montessori elementary school and then the Max Planck grammar school and, after graduating from high school , studied politics and sociology at the University of Düsseldorf for four semesters . This was followed by an incomplete training as a seamstress .

Her television career began in 1993 with the music broadcaster VIVA , where she hosted the shows Interaktiv and Heike Hausbesuch , among others . From August 1995 to summer 1996 she was the presenter of Bravo TV on RTL II . In 1997 the weekly Heike Makatsch Show was canceled after eight episodes in RTL II's late program due to low audience ratings .

Makatschs career as an actress began in 1996 with the film Männerpension by Detlev Buck . For her role in this film, she was awarded the Bavarian Film Prize for best young actress. For the film, she recorded a reinterpretation of Tammy Wynette's Stand by Your Man . 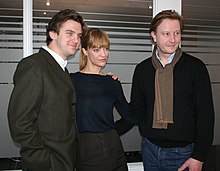 From 1996 to 2004 Makatsch had a relationship with the British actor Daniel Craig . During the filming of Keine Lieder über Liebe , she met the musician Max Schröder (from the band Tomte , among others ) in 2004 , with whom she has two daughters. At the end of 2014, Makatsch explained in an interview with NIDO magazine that the relationship had long ended, but the children would continue to be brought up together. She was pregnant while filming the crime scene episode Five Minutes in Heaven , and Makatsch's third daughter was born in 2015. She is in a relationship with the actor Trystan Pütter .

In 2006 Heike Makatsch went on a trip to Ghana with the development aid organization Oxfam and has been Oxfam ambassador ever since. She was a member of the Amnesty International jury at the Berlinale 2008 and said: “A film that opens my eyes to injustice, in both a political and a private sense, is relevant to me. I wish for such film experiences much more often. Then no one can say anymore that they didn't know anything about any of this. "

Heike Makatsch also supports the Tax Against Poverty campaign , which advocates the introduction of a financial transaction tax . On this subject, she played the leading role in the short film Steuer gegen Armut together with Jan Josef Liefers . A good idea?