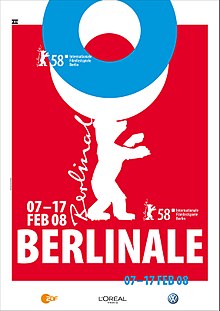 The Berlinale opened with Martin Scorsese's documentary Shine a Light . The film documents two concerts by the Rolling Stones in October / November 2006 in New York City . Michel Gondry's Be Kind Rewind was shown as the graduation film .

The festival achieved a new visitor record again this year. More than 20,000 visitors to the festival were accredited. The accredited came from 125 countries, including 4,200 journalists. 230,000 of the 430,000 moviegoers bought a ticket. In addition to the Rolling Stones, stars like Madonna and Indian megastar Shah Rukh Khan came to the Berlinale to celebrate the world premieres of their films.

The following films were shown in the official competition:

The Rolling Stones , Martin Scorsese (2nd from left) and Dieter Kosslick (right) before the premiere of Shine a Light

The president of the international jury was the Greek-French director Constantin Costa-Gavras , who won a Golden Bear at the Berlinale in 1990 . He was supported by the actresses Diane Kruger (Germany) and Shu Qi (Taiwan), the German production designer Uli Hanisch , the Oscar-winning US film editor and sound designer Walter Murch , and the Russian film producer Alexander Rodnjanski . The Danish director Susanne Bier and the French actress Sandrine Bonnaire canceled their participation shortly before the start of the film festival.

In the short film competition of the Berlinale 29 films were shown, 11 of them in competition.

In the Panorama section 50 films were presented this year, including 18 documentaries. The opening film of the main program was the Russian production Rusalka by Anna Melikyan . “Panorama Special” opened with the film Lemon Tree by Eran Riklis with Hiam Abbass in the leading role. Within the section Madonna presented her first film Filth and Wisdom as a director. The film Chiko , produced by Fatih Akin , was also part of the panorama program.

The Generation section consists of the parts Kplus (children's films) and 14plus (youth films from 14 years of age). In both parts, the Transparent Bears prizes were awarded by a jury of children and young people respectively for the best feature film and the best short film.

The retrospective was dedicated to Luis Buñuel's work . The Spanish director was honored with a comprehensive retrospective of his films and a series of events with lectures.

The homage of the 58th Berlinale was dedicated to the Italian director Francesco Rosi . On February 14, 2008 he was awarded the Honorary Golden Bear for his life's work .

The Perspektive Deutsches Kino will arouse curiosity about current trends and developments in German cinema according to the organizers. Around twelve films from the current year are selected. The Dialogue en perspective prize was awarded by a Franco-German jury. In 2008 it was awarded to the Drifter contribution, and an honorable mention went to Lostage. Section head was Alfred Holighaus .