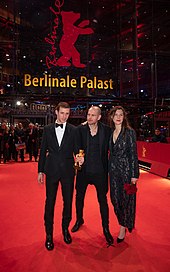 Dieter Kosslick will be Berlinale Director for the last time in 2019.

The 69th  Berlin International Film Festival (Berlinale) took place from February 7th to 17th, 2019. They were held for the 18th and last time under the direction of Dieter Kosslick , who will be replaced by Carlo Chatrian and Mariette Rissenbeek in 2020 .

The festival opened with the ensemble film The Kindness of Strangers by Lone Scherfig , who also competed for the Golden Bear . The final program was officially presented on January 29, 2019. The international co-production Synonymes by the Israeli director Nadav Lapid was awarded the main prize of the festival .

The British actress Charlotte Rampling was honored with the Honorary Golden Bear for her life's work and a tribute at the festival .

The jury president was assisted by several jury members who were named at the official presentation of the program on January 29, 2019:

The selection of films in the competition for the Golden Bear was announced on December 13, 2018, January 10 and 17, 2019. Of the originally 17 films in the competition, the Chinese entry Yi miao zhong (One Second) by Zhang Yimou could not be officially shown four days before the premiere due to technical problems in post-production .

In the Berlinale Shorts series , feature, documentary, experimental and animation films with a maximum length of 30 minutes (including credits) are shown. International contributions must not have been shown outside their country of origin before the Berlinale performance. “Different dimensions of power, visibility and knowledge” in conjunction with “the question of participation” were named as the topic. The Berlinale Shorts curator has been the freelance writer and film director Maike Mia Höhne since 2007 .

In 2019, the International Short Film Jury includes the US Senior Curator at Vimeo Jeffrey Bowers , the Croatian Head of Acquisition at MUBI Vanja Kaludjercic and the artistic director and founder of the RAW Material Company from Senegal Koyo Kouoh . In addition to the Golden Bear for the best short film and the Silver Bear, the jury will award nominations for the European Short Film Award and the Audi Short Film Award.

The program was announced on December 18, 2018 and January 21, 2019. A total of 45 films will be presented with the participation of 38 countries, including 34 world premieres and 19 debut films. The program is divided into 29 feature films and 16 documentaries.

The 49th edition of the forum is to show 39 films in the main program, including 31 world premieres.

This Berlinale section shows suitable international film productions for children and young people. Long films with a running time of at least 60 minutes and short films with a maximum duration of 20 minutes that were completed within twelve months before the start of the festival were allowed. Foreign productions may be shown in advance at a non-European festival, broadcast in the country of origin on television or distributed via video-on-demand . European films (with the exception of German productions) are permitted in advance to have been published in the country of origin, at a national festival or an explicit children's or youth film festival, or to have had a national theatrical release. The head of the section is Maryanne Redpath. The first contributions were published in December 2018.

As an award, a glass bear is given to a feature film and a documentary film by a children's (eleven Berlin children aged 11 to 14 years) and a youth jury (seven young people between 14 and 18 years of age). There is a separate international Generation Kplus jury that awards cash prizes for the best feature-length and short film donated by the German Children's Fund . Another international jury, on behalf of the Federal Agency for Civic Education , awards a grand prize for the best feature film and a special prize for the best short film.

To mark the 30th anniversary of the Jerusalem Sam Spiegel Film School (JSFS), the following short films were shown as outstanding works by the film school:

The Perspective German Cinema section, created at the suggestion of Dieter Kosslick in 2002, presents both short and long feature, documentary and experimental films by young German filmmakers with a minimum length of 20 minutes. It is aimed at talented directors who are at the beginning of their careers. Previous participation of the entries at a film festival was not an exclusion criterion. The head of the section is Linda Söffker.

The contributions announced so far (excluding the award-winning film of the feature film competition of the Max Ophüls Prize 2019):

Retrospectives on film history have been held at the Berlinale since 1977 in collaboration with the Deutsche Kinemathek . In 2019, the retrospective was devoted to the title “Self-determined. Perspektiven von Filemacherinnen “the filmmaking of female directors in the period from 1968 to 1999. It should include an arc from May Spils ' Zur Ding, Schätze (1968), Im Innern des Wals (1985) by Doris Dörrie to the documentary Mit Haut und Haar (1999) by Martina Döcker and Crescentia Dünßer . In addition, around 20 short and medium-length films were included in individual programs as supporting films. Thematically, the retrospective followed on from the 2016 Berlinale , whose retrospective “Germany 1966 - Cinematic Perspectives in East and West” commemorated the beginning of the careers of West German women directors. The directors Katja von Garnier , Iris Gusner , Jeanine Meerapfel , Helke Misselwitz , Helke Sander , Evelyn Schmidt , Ula Stöckl and Margarethe von Trotta were invited to interviews .