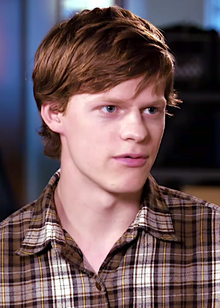 Lucas Hedges (born December 12, 1996 in Brooklyn , New York City ) is an American actor . He played roles in films such as Labor Day , The Zero Theorem , Grand Budapest Hotel , Kill the Messenger and Manchester by the Sea .

Lucas Hedges was born the son of writer, screenwriter and film director Peter Hedges (* 1962) and the poet Susan Bruce (Titman). His father gave him his first small film assignment in 2007 as Marlene Lawston's dance partner in his romantic drama Dan - Mitten im Leben! Then in 2012 the boy started acting in earnest. This was followed by roles in Wes Anderson's drama Moonrise Kingdom and in Dante Ariola's film production A great life . 2013 he played in the film Labor Day by Jason Reitman , the role of Richard and director Terry Gilliam gave him the role of Bob in his fantasy drama The Zero Theorem alongside actors like Christoph Waltz , Mélanie Thierry and David Thewlis . The director Wes Anderson gave him a small part again in 2014 in his cinema comedy Grand Budapest Hotel . He was also seen in the 2014 drama Kill the Messenger by Michael Cuesta . In 2016 he played the role of Patrick in Kenneth Lonergan's drama Manchester by the Sea . This earned him an Oscar nomination for Best Supporting Actor in 2017 .

In addition to his work in film, he also appeared in the prominent television drama The Corrections in 2012 alongside actors such as Maggie Gyllenhaal , Ewan McGregor , Rhys Ifans , Chris Cooper and Dianne Wiest .

In 2017 he was accepted into the Academy of Motion Picture Arts and Sciences (AMPAS), which awards the Oscars every year.

In German dubbing, it is currently mostly spoken by Patrick Baehr or Marco Eßer .