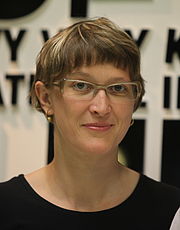 Jasmila Žbanić (born December 19, 1974 in Sarajevo ) is a Bosnian director.

Žbanić received her training at the Academy of Performing Arts in Sarajevo. In 1995 she went to the USA and worked as a puppet actress in the Bread and Puppet Theater . In 1997 she came back to Sarajevo and founded a film production company. She shot several art videos and documentaries herself, which were shown at the 2004 Documenta in Kassel . Her feature film debut Grbavica - Grbavica was awarded the 2006 Golden Bear at the International Film Festival in Berlin excellent.

She was voted number 3 of the personalities of 2006 by the daily Nezavisne Novine from Banja Luka .

In 2010 she received another invitation to the competition of the 60th Berlin Film Festival for her feature film Between Us Das Paradies (English-language festival title: On the Path ) . In the same year, at the Munich Film Festival , she received the Peace Prize of German Film - The Bridge, endowed with 10,000 euros, for this film, which was released in German cinemas on September 2, 2010 under the distribution title Between Us, Paradise .

On February 23, 2014, Žbanić received the KAIROS Prize 2014 at the Deutsches Schauspielhaus Hamburg .

Žbanić is a signatory of the 2017 declaration on the common language of Croats , Serbs , Bosniaks and Montenegrins .

Your feature film Quo Vadis, Aida? was invited to compete for the Golden Lion at the 77th Venice International Film Festival in 2020 .

During the protests in Bosnia and Herzegovina in 2014 , Croatian Prime Minister Zoran Milanović visited the city of Mostar . Žbanić criticized this visit as part of an interview for the H-ALTER portal and ended the interview with the words “Milanoviću, marš kući!”, Meaning “Milanović, march home!”. Her testimony was then quoted on the evening news of several Croatian TV channels.