This article covers the film award. For the article of the same name about the historical building in Leipzig, see Golden Bear (Leipzig) . 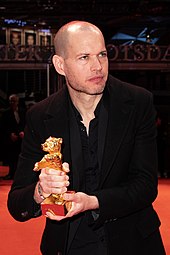 Israeli director Nadav Lapid with the trophy for Synonymes , 2019

The best feature film in the international competition is awarded the Golden Bear at the annual Berlin International Film Festival . This is the most important award of the festival even before the Grand Jury Prize ( Silver Bear ). As is the case with the Golden Lion of the Venice Film Festival or the Golden Palm of the Cannes Film Festival in relation to the respective city, the motif was taken from the city arms of Berlin . A competition jury, which is mostly composed of international filmmakers, votes on the award of the prize. The prize trophy was designed by the German artist Renée Sintenis and has also been awarded to the best entry in the Berlinale Shorts section , the international short film competition, since 2007.

The works of American film directors were most frequently awarded the main prize in Berlin (13 wins), followed by their colleagues from France (8), Great Britain and Italy (7 each), Germany and Spain (6 each). Only Ang Lee from Taiwan has won the Golden Bear twice (1993 and 1996). In addition, the competition jury has been unable to agree on a winning film several times in the past, as happened in 2002 when Briton Paul Greengrass ( Bloody Sunday ) shared the Golden Bear with Hayao Miyazaki ( Spirited Away ). It was the second victory of an animated cartoon after the award of Cinderella in 1951. Also in 1951 was James Algars Valley of the Beavers for the first time awards a documentary, the first 2016 wildfire by Gianfranco Rosi another documentary victory followed.

Directors from German-language cinema were successful for the first time in 1951, when Die Vier im Jeep by Swiss Leopold Lindtberg was awarded together with four other productions. He was followed by the Germans Robert Siodmak (1955 for Die Ratten ), Peter Lilienthal (1979 for David ), Werner Schroeter (1980 for Palermo or Wolfsburg ), Rainer Werner Fassbinder (1982 for Die Sehnsucht der Veronika Voss ), Rainer Simon (1985 for Die Woman and the Stranger ), Reinhard Hauff (1986 for Stammheim ) and Fatih Akin (2004 for Gegen die Wand ).

As at the Cannes and Venice Film Festivals, victories by female filmmakers remained exceptional. After the Hungarian Márta Mészáros won the Golden Bear with her drama Adoption in 1975 , she was followed in 1977 by the Soviet director Larissa Schepitko ( Ascent ), in 2006 by the Bosnian Jasmila Žbanić ( Esma's secret - Grbavica ), in 2009 by the Peruvian Claudia Llosa ( A Pearl Eternity ), 2017 the Hungarian Ildikó Enyedi ( body and soul ) and 2018 the Romanian Adina Pintilie ( Touch Me Not ) .

1In 1951, the prize was awarded according to the genres of documentation ( In Beaver Valley ), drama ( The four in a jeep ), comedy ( without giving the address ), crime or adventure film ( jury ) and music film ( Cinderella ).
2In 1978 the jury could not agree on a winning film and awarded the Golden Bear to the country of Spain for its total contribution, including the two films in the competition The Trout and Conversations with Max .
3Marco Ferrari's award for his film Haus der Freuden was also in recognition of his oeuvre.