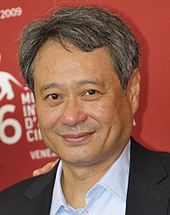 Ang Lee ( Chinese  李安 , Pinyin Lǐ Ān ; born October 23, 1954 in Chaozhou , Pingtung County , Republic of China (Taiwan) ) is a Taiwanese film director , screenwriter and producer. He is known as an award-winning director for films as diverse as Eat Drink Man Woman , the Jane Austen adaptation Sense and Sensuality and the martial arts film Tiger and Dragon . For his films Brokeback Mountain (2005) and Life of Pi: Shipwreck with Tiger (2012), he was each awarded an Oscar in the category Best Director .

Ang Lee was born in Taiwan in 1954 . His parents, emigrants from China , met in Taiwan. Lee is their eldest son. The paternal and maternal grandparents perished in the course of the communist revolution in China. Since his father changed jobs as a teacher, Ang Lee grew up in various cities in Taiwan.

Contrary to his parents' wishes to pursue a classical academic career like his father, Lee became interested in acting and, with their consent, first studied theater and film in Taipei . He then went to the USA in 1978 to study theater studies and directing at the University of Illinois at Urbana - Champaign . After obtaining his BA in Illinois, he devoted himself entirely to studying film and theater production at the University of New York , from which he graduated in 1985 with a master's degree. He then decided to stay in the USA with his wife, who was also from Taiwan.

Despite his first experiences with Super 8 films in Taiwan, his interest shifted late to film directing and production - also because Lee did not want to admit his career aspirations to his family and especially his father for a long time. After graduating, he was initially unable to implement his own projects. It wasn't until 1992, when he finished his first feature film, that a continuous career as a director emerged.

His greatest successes to date - both with audiences and critics - are the martial arts drama Tiger and Dragon with a pan-Asian star cast and the post-western romance Brokeback Mountain with Heath Ledger and Jake Gyllenhaal . For the latter, Lee was the first Asian-born and non-white director to receive the Oscar for best director in 2006. In addition, Lee's films have been awarded two Golden Bears at the Berlinale and two Golden Lions at the Venice Film Festival , along with many other awards .

Lee has been married to microbiologist Jane Lin since 1983. They live in White Plains , Westchester County , New York State . The sons Haan (* 1984) and Mason (* 1990) are from the marriage . Ang Lee holds a United States Permanent Resident Card .

After his first film experience in Taiwan, Lee did not take a serious look at filmmaking again until he was studying in the USA. As part of his studies in New York, he made a few short films and, among other things, worked as an assistant director on the final shoot of his fellow student Spike Lee . His own graduation film Fine Line won two prizes at the prestigious film festival at his university in 1985. It was not until 1992 that he succeeded in making the first of a series of three films on the subject of west-east conflicts among Taiwanese families, after winning a lavishly paid screenplay competition in Taiwan.

These first three feature-length films that Lee was able to make are generally referred to as Father Knows Best . This name goes back to the recurring character of the Chinese head of the family, played by the Taiwanese actor Sihung Lung . The three films thematize, as was later often the case with Ang Lee, family problems that arise from the conflict between self-determination and tradition, between inside and outside, between East and West and between generations. The films are all US-Taiwanese co-productions. In contrast to all of the projects that have followed so far, Lee's first films are not adaptations, but rather films based on original scripts he wrote himself.

The first film, Pushing Hands (1992), is about a Chinese father moving in with his adult son and American daughter-in-law in New York and the intercultural problems that arise in the new shared apartment. This was the first collaboration between Lee and screenwriter and producer James Schamus - since then the two have formed a close working partnership on every Lee film. As in the two following films, they wrote the script together. In all of Lee's other films (with the exception of the short film The Hire: Chosen ), Schamus has since played a decisive role.

The regular collaboration with film editor Tim Squyres also began in Lee's first film. Squires has edited every film Ang Lee has made except for the 2005 hit Brokeback Mountain .

After the success of his debut, Lee was next to shoot The Wedding Banquet (1993), a comedy about the fake marriage of a homosexual Taiwanese in exile in the United States. The figure of the strict but wise head of the family reappears here. Had Pushing Hands initially provided mainly in Taiwan for attention (and prices), was the second feature film Lees also Europe's attention to the upcoming director: The film received at the Berlinale in 1993. Golden Bear as Best Foreign Language Film and was also for a Oscar nominated. It is also considered to be one of the most profitable low-budget films of 1993. With a production cost of just one million US dollars, it achieved gross profits of over 23 million US dollars.

Sihung Lung is also in the last part of the trilogy, Eat Drink Man Woman (1994), the “congenial embodiment of the Chinese head of the family”, the “center of these masquerades, in which the aim is to save an old face and then learn to do it to lose in order to gain a new one that is more fit for life. ”This time he is the widowed father of three daughters who approach their lives and loved ones in different ways and also have to resolve internal family conflicts. Unlike its predecessors, Eat Drink Man Woman was shot in Taipei . The focus of the film (the title suggests) is love and food. Ang Lee, privately a passionate cook, placed particular emphasis on the culinary component as a stylistic device and designed the main character of the elderly widower as a famous chef.

With the offer of producer Lindsay Doran to film the adaptation of the novel Mind and Feel by Jane Austen , written by British actress Emma Thompson , in Great Britain, Lee opened up a long-awaited new perspective beyond Asian-influenced material.

In a new trilogy he deals with different cultures:

2000 – today: commuting between west and east

Tiger and Dragon and Hulk are very different action films. Lee won two Golden Globes with Tiger and Dragon . The work also won four Academy Awards (Oscars), including the trophy for best foreign language film. For this film he received a Chlotrudis Award in 2001, and he received his second Chlotrudis in 2006 for Brokeback Mountain .

For Brokeback Mountain , Lee has received a variety of film awards, including the Oscar for Best Director, the Golden Lion of the Venice Film Festival, and the Hollywood Foreign Press Association's award for Best Director of the Year. In 2007 he filmed a short story by Eileen Chang with Danger and Desire . The thriller is set in Shanghai at the time of World War II and is about a young Chinese agent (played by Tang Wei ) who is hired to liquidate a high-ranking traitor ( Tony Leung Chiu Wai ). Lee's first Chinese-language feature film production since Tiger and Dragon was represented in the official competition of the 64th Venice Film Festival in 2007 and again won him the Golden Lion. In the same year, Danger and Desire was chosen as the official Taiwanese entry for the nomination for the best foreign language film at the 2008 Academy Awards, but was later withdrawn on the recommendation of the Academy of Motion Picture Arts and Sciences and replaced by Chen Huai-Ens Lian xi qu replaced.

In late February 2009 it was announced that Lee would head the jury for the 66th Venice Film Festival . Two months later he received an invitation to compete at the 62nd Cannes International Film Festival for his comedy Taking Woodstock .

In 2013 he was appointed to the competition jury of the 66th Cannes Film Festival .

Ang Lee is an internationally recognized and successful director and is considered to be one of the most versatile filmmakers in recent years. Often in his films Lee deals with the family in a way that bears the autobiographical traits of his own life. He deliberately lets his surroundings have an impact on him and incorporates it into his films.

“My best ideas always come out of nowhere. And sometimes I have to go nowhere for them to come to me. It's not that I close my eyes and see pictures. The pictures find me. "

Most of his films are characterized by a narrative structure that is not straightforward and presents the characters and the story from different angles. He combines the conflicts of human life with traditional and innovative style elements.

For Ang Lee, the classically solid narrative structures are too boring, so he combines different genres and eras. He himself once said: "I hope I'll be 300 years old and I can try out all the film genres, mix and twist them and learn everything about them." ( Ang Lee :)