Logo of the German Film Award since 2019

The German Film Prize (formerly the Federal Film Prize ), often also referred to as Lola , has been awarded since 1951 and is considered the most prestigious award for German film . With a total of almost three million euros in prize money, it is the most highly endowed German culture prize. The German Film Prize is awarded annually in spring / summer, broadcast alternately by ARD and ZDF , and produced by Deutsche Filmakademie Produktion GmbH, a wholly-owned subsidiary of the German Film Academy .

The symbol of the film award is the Lola statuette, which is awarded in gold to the winners of the various categories. In the “Best Feature Film” category, it will also be awarded bronze and silver.

The 70th edition of the German Film Award took place on April 24, 2020, when Nora Fingscheidt's Systemsprenger was awarded eight prizes, including Best Fiction Film . Originally planned as a prize gala in the Palais am Funkturm with a large audience, as in previous years, due to the COVID-19 pandemic , the event had to be conceived as a live TV show in the first with connected guests.

Until 2004, the award winners were selected by a commission that also included politicians and church representatives. This was often criticized because of proportional representation. After a dispute about the non-nomination of the feature film Oi! Warning from the award committee at the time with the Federal Government Commissioner for Culture and Media, Prof. Julian Nida-Rümelin, who was responsible for the film award, in 2001, the method of awarding the award was revised in the following period. Based on the American model Oscar , which is awarded by the members of the Academy of Motion Picture Arts and Sciences - albeit without funding from the state - the German Film Academy was founded in 2003 . In 2005 it replaced the selection committee with a three-stage election process for academy members.

The award ceremony took place from 2006 to 2009 in the Berlin Palais am Funkturm . In 2006, the date was brought forward two months to May for the first time. The reason given by the film academy was that they wanted the event to take place at the beginning of the cinema year; in this way the award-winning films could better exploit the marketing effect of the award. From 2010 to 2013 the traditional Friedrichstadt-Palast was the venue for the award ceremony. In 2014 the award gala took place in Berlin's Tempodrom and in 2015 it returned to the Palais am Funkturm. 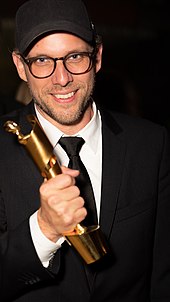 Originally, the award was presented in a number of different forms, including the golden bowl touring award for the best feature-length film and film tapes in gold and silver.

Since 1999, a statuette in the form of a female figure wrapped in a stylized film tape in the Art Deco style has been awarded as a trophy . Based on Marlene Dietrich's role of Lola in The Blue Angel and the film of the same name by Rainer Werner Fassbinder as well as Tom Tykwer's great success Lola Run , this one bears the name Lola .

The statue was developed in 1999 by Stephan Reichenberger together with the New York designer Mechthild Schmidt, the design for the prize mannequin comes from the sculptor Roman Strobl . Reichenberger: “There was no specific order to replace the previously awarded film tape as part of the film award gala relaunch. Mechthild Schmidt and I presented our idea for the Lola statuette on our own initiative to the then Minister of State for Culture Michael Naumann , who liked it - and a new movie star was born! "The artist about her design:" In keeping with the medium of film, I wanted to symbolize movement . I wanted to give the statue self-confidence without being strict, strength without becoming static. It was important to me to give the German Film Prize its own identity, not to lean on what other prizes have already successfully symbolized: While the 'Oscar' stands firmly and symmetrically identifies the fighter and winner, with the film prize I wanted the dynamism of the Embody movement, the muse, the inspiration that leads to the work of art. "

The winners of the German Film Prize, the Lola, are chosen by the members of the German Film Academy and awarded at the Film Prize Gala. Filmmakers from all professional groups who have distinguished themselves through their continuous, creative work in German cinema, evaluated the current performance of their colleagues in a three-stage selection process.

Stage 1: Registration and pre-selection The films submitted must meet various criteria in order to be eligible for pre-selection. In the various categories, a different number of films will be determined for the preselection, whereby all individual performances from the preselected films qualify for the nomination process.

3rd stage: Election of the award winners The members of the German Film Academy vote among all nominations regardless of the section for all award categories in a secret and written ballot. The notary has to keep the result confidential until the day of the award. The award of the prizes by the Federal Government Commissioner for Culture and the Media takes place annually in the spring / summer of the respective year.

The prize is awarded in the following categories:

* The Bernd Eichinger Prize is not necessarily awarded every year.

Up to 2004 the categories of camera, editing, production design, costume design and film music were combined and were recognized as “outstanding individual achievement”. The “Outstanding Individual Achievement” in the area of ​​screenwriting could previously be awarded to both an unfilmed and a filmed script. Also up to 2004 there was an honorary award for the best foreign film and a second audience award, which honored the best “actor of the year ”.

A special award for a film was the golden bowl .

In the early years there were also typical categories such as

for the prizes such as head with wings, golden box, vase with golden twig were awarded.

Another category was the film tape in gold for many years of outstanding work in German film, which was awarded for the first time in 1962.

The most successful films

The most successful personalities

Rainer Werner Fassbinder was honored six times during his lifetime (2 × 1970, 1971, 1972, 1978, 1979) and once posthumously with a special award (1989), making him the most frequently honored personality. The actresses with the most frequent acting honors are the Fassbinder muses Irm Hermann (1970 as part of an acting ensemble, 1972, 1983), Eva Mattes (1971, 1973 and 2002), Hanna Schygulla (1970 and 1975 as part of an acting ensemble and 1971) and Barbara Sukowa (1982, 1986, 2013) as well as Sandra Hüller (2006, 2014, 2017) and Katja Riemann (1996, 1998, 2005). Götz George has won four actor awards (best actor 1985, 1992, 1996 and best young actor 1960). Since the introduction of the official nomination mode in 1995, Meret Becker has been the actress with the most frequent mentions (six). Overall, filmmaker Tom Tykwer holds the record (eleven). In 2016, Laura Tonke was the only actress to date to receive both the best leading actress and best supporting actress awards in the same year; Albrecht Schuch was the only actor so far to receive both best leading actor and best supporting actor awards in 2020. Three times unsuccessfully in the final selection, Oliver Masucci and Nadja Uhl hold the record with the most nominations among the actors without a win. The director Christian Petzold and the production designer Christian M. Goldbeck are the most frequently named personalities (six nominations each) who have never received Lola.

Categories of the German Film Award

Awards of the German Film Prize after years