Monika Grütters (born January 9, 1962 in Münster ) is a German cultural politician ( CDU ) and has been the Federal Government Commissioner for Culture and the Media since December 2013 . She has been a member of the German Bundestag since 2005 and was chairwoman of the committee for culture and media from 2009 to 2013 . She is also a member of the Presidium of the CDU and was also the state chairwoman of the CDU Berlin from 2016 to 2019 .

Monika Grütters graduated after Abitur 1981 at Episcopal High School for Girls Marie school in Munster from 1982 to study German literature , art history and political science at the Westphalian Wilhelms University in Muenster and the Rheinische Friedrich-Wilhelms-University of Bonn , which she in 1989 as a Master of Arts finished. From 1983 to 1988 she received a grant from the Konrad Adenauer Foundation . After working in press and public relations at the Bonn Opera from 1987 to 1988 during her studies , she worked in the same area from 1990 to 1991 at what was then the Museum of Transport and Technology in Berlin and from 1991 to 1992 for the Berliner Verlag - and bookselling company Bouvier. From 1992 to 1995 she was press spokeswoman for the Senate Administration for Science and Research of the State of Berlin.

Grütters also worked in public relations at what was then Bankgesellschaft Berlin from 1996 . From 1998 to 2013 she was the board spokeswoman of the Brandenburg Gate Foundation . She is a member of the Central Committee of German Catholics (ZdK) and since December 2013 she has been the spokesperson for the “Culture, Education and Media” department of the ZdK. In 2019, she joined an open letter to Cardinal Reinhard Marx published by eight personalities - theologians and well-known Catholics - on February 3, 2019 in the Frankfurter Allgemeine Sonntagszeitung . It calls for a "new start with sexual morality" with a "sensible and fair assessment of homosexuality", "real separation of powers" in the church and the removal of the excesses of the ordination office and its opening to women. An appeal was made to the German Bishops' Conference to give diocesan priests the freedom to choose their way of life "so that celibacy can again credibly refer to the kingdom of heaven".

Grütters is a Roman Catholic and single.

As a representative of the federal government, she is a member of the administrative board of Deutschlandradio . 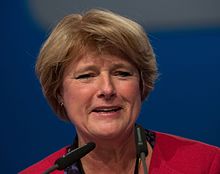 Monika Grütters at the 29th party conference of the CDU in Germany on December 6, 2016 in Essen

Monika Grütters joined the Junge Union in 1978 and the CDU in 1983. Since 1998 she has been a member of the CDU Berlin regional executive committee . From 1995 to 2005 Grütters was a member of the Berlin House of Representatives . There she was science and cultural policy spokeswoman and from 2001 to 2005 also deputy chairwoman of the CDU parliamentary group. She has been a member of the German Bundestag since 2005 . She has always entered the Bundestag via the Berlin State List and was chairwoman of the Committee for Culture and Media from 2009 to 2013. In the 2013 federal election she was again the top candidate of the CDU Berlin.

Since December 17, 2013, Grütters has succeeded Bernd Neumann as the Federal Government Commissioner for Culture and the Media. At the end of June 2015 and mid-July 2015, she presented an amendment to the German cultural property law against emigration , of which two drafts were known and discussed controversially. The reform was implemented in 2016 in the form of the newly enacted Cultural Property Protection Act.

After Frank Henkel resigned from the office of CDU state chairman in Berlin on October 13, 2016, Grütters was unanimously nominated as a candidate for his successor the following day by the presidium and state board of the CDU Berlin. At a small party conference of the CDU Berlin on December 2, 2016, Grütters was elected as the new state chairman with 78.4 percent of the vote. For the first time in the history of the Berlin CDU, a woman took over the chairmanship. Four days after her election, Grütters was elected at the CDU federal party conference in Essen with 70.37 percent as the successor to Emine Demirbüken-Wegner in the CDU Presidium and thus in the higher party circle around Chancellor Angela Merkel .

At the end of March 2019, she announced that she would withdraw from the state chairmanship of the CDU Berlin for the party congress on May 18, 2019. After her departure, she took on the position of assessor in the state executive. The fact that she and Berlin's Senator for Culture Klaus Lederer (Die Linke) supported the dismissal of Hubertus Knabe had led to considerable anger in the Berlin CDU, which was ultimately decisive in replacing Grütters.

In her role as Minister of State for Culture, Monika Grütters was assigned a decisive role in the decision to build the Museum of Modern Art in Berlin, which is controversial because of its cost and design .

In 2015, Grütters launched the German Bookstore Award. It supports the inclusion of the German language with constitutional status in the Basic Law . Her management style and her personnel decisions received criticism in the press.

Federal Government Commissioner for Culture and the Media

State chairwoman of the CDU Berlin