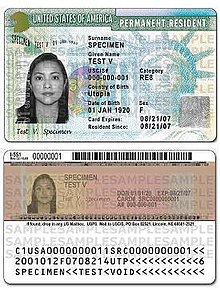 The Green Card differs from other visas in that its holder is allowed to stay and work in the USA for an unlimited period of time ; it is not stuck into the passport like any other visa, but forms a separate identification document. The legal status of permanent residency in the USA, a country of immigration, is the middle of three stages on the way to naturalization:

In January 2010, there were an estimated 12.6 million green card holders in the United States, or around four percent of the total population.

A general reporting requirement for people living in the United States without US citizenship first came into being in 1940 with the Alien Registration Act . The measure, which grew out of wartime conditions, was intended to shield the country from a potential internal threat and therefore did not distinguish between legal and illegal immigrants. The contact points were the post offices, which forwarded reports from foreigners to the immigration authorities. This sent the registered Alien Registration Receipt cards , which were printed on white paper and had the official designation Form AR-3 .

After the end of World War II , registration became part of the regular immigration procedure. Instead of in the post office, foreigners were now registered by the INS upon arrival at the port and received different types of alien registration cards , which gave information about their exact status (visitors, temporary workers, permanent alien residents ). Permanent residents were given a document officially named Form I-151 . The document was small and printed on green paper, making it the first “green card”.

As a result of a law of 1950, it became possible for holders of the AR-3 documents still in circulation from April 17, 1951 to exchange their old papers for the new Green Card, but only if they could prove that they were in the USA was legal. Anyone who did not provide this evidence from then on lived with the risk of being prosecuted for violating immigration laws. Conversely, the green card documented that the holder's stay in the USA was legal .

The green card thus became a coveted paper that was now often forged . In order to make forgeries more difficult, the design of the card was changed again and again. From the introduction of the card in the 1940s to 1977, the INS released cards in 19 different designs; the color was also changed several times: in 1964 the card was pale blue and after 1965 dark blue. Real progress in terms of counterfeit security was only achieved in January 1977 when the INS first issued Form I-151 as a machine-readable card. But even this has changed design and color several times since its introduction.

After the INS was dissolved on March 1, 2003, the USCIS took over issuing the cards.

Violations of the obligations of a green card holder can lead to the withdrawal of the green card, whereby it depends on the gravity of the offense and the decision is at the discretion of the evaluating officer. Furthermore, in the event of a later application for naturalization, the violations can lead to their rejection or delay.

Giving up and losing permanent residency

Paths to the Green Card

In the classic case, the acquisition of a green card is preceded by a normal, temporary immigrant visa (e.g. an H-1B visa). Those who have such a visa can apply for a Green Card of the categories EB-1, EB-2, EB-3, EB-4 or EB-5 if their employer supports them in this complex and costly process. Employment-based green cards are limited; 140,000 cards can currently be issued each year. This figure also includes the green cards for the family members (spouse, minor children) of the main applicant.

Far more often than on the basis of an employment relationship , green cards are issued as part of family reunification . Close family members - spouses, unmarried minors, and parents - of U.S. citizens can apply for a green card without completing the pre-immigrant visa. The same applies to spouses and unmarried minor children of permanent residents. Green cards for close family members are not limited. Between 2000 and 2003, an average of 402,000 cards were issued each year.

Other family members - children of age, married children, and siblings - of U.S. citizens can apply for a green card. However, these green cards are limited (226,000 per year). Applicants are put on a waiting list and receive the card after 4 years at the earliest, sometimes after more than 12 years. Some applicants from countries with particularly high levels of immigration wait 22 years. Green cards left over from the quota for employment-based cards at the end of the year are added to the quota for other family members.

The third possible route, which also leads directly to the green card, but offers significantly lower chances of success, is to participate in the so-called “green card lottery”, the diversity immigrant visa program of the US State Department.

A comparatively small contingent of green cards is issued to refugees and asylum seekers.

Applicants for an employment-based green card are usually expected to have a university degree or some other particularly high qualification. Only 10,000 green cards per year are available for low-skilled applicants.

The employment-based variant of permanent citizenship can usually only be initiated if the applicant's American employer sponsors this employee in the application process . Exceptions are the categories EB-1 A and EB-2 with "National Interest Waiver", in which the applicant can act as a sponsor himself. The procedure is extremely complex and usually takes several years. It begins with an application (form ETA ‒ 750) from the employer to the Department of Labor and a further application (I ‒ 140) to the USCIS immigration authorities. The process is very costly for the employer because he has to commission a government-controlled law firm to conduct extensive research into whether suitable applicants for the advertised position can also be found domestically. Only if this Foreign Labor Certification Process is unsuccessful and the Department of Labor has confirmed the result, the Homeland Security and Foreign Ministry can process the application further.

Only then does the employee take action himself. He files an application (I-485) with USCIS for Adjustment of Status for himself and, if he has a family, for his spouse and children. USCIS will then invite all applicants for fingerprinting. An Employment Authorization Document (EAD) and an Advance Parol or Travel Document (AP) can be requested at the same time as I-485 . The process ends with the stamping of the passport of the home country and the handing over of the green card.

Persons of National Interest to the United States

In the EB-1 category, highly qualified people with exceptional skills in the field of science, art, education, business or sport (holders of international awards, etc.) can apply, as well as outstanding professors and researchers as well as certain managers and executives of the multinational Economy.

In category EB-2, people with a higher education qualification can apply, as well as people with special skills in a scientific, artistic or business field.

A job offer from a US employer is normally required. An examination of the labor market must also be carried out here, which must show that no American employee with this qualification is available for the job. According to the Visa Bulletin, there was a waiting period of more than three and a half years for the first time in July 2012. Currently (as of October 2013) there is no longer any waiting period (exception: Chinese and Indian nationals). A "National Interest Waiver" waives the requirement for a job offer and the associated labor market test, but is associated with additional obligations to provide evidence.

The application on the basis of a job offer is possible in category EB-3 for qualified persons with a higher school leaving certificate, skilled workers with at least two years of professional experience and other employees whose skills are sought in the USA. The Permanent Resident Card can only be applied for after an examination of the US labor market, which must show that no American employee is available. Long waiting times must be taken into account for employees without special training. Here the waiting time is e.g. Currently approx. Six years (as of August 2012).

Pastors, priests or rabbis who are ordained or who carry out comparable religious activities can apply for a permanent resident card of category EB-4. In contrast to the nonimmigrant visa R-1, which has a similar definition, it must be proven here that the applicant has already worked for the church or community in the home country for at least 2 years. An examination of the labor market is not necessary, however.

Investors who create jobs for ten unrelated people by investing capital in new business ventures in the United States can receive an EB-5 Permanent Resident Card. The investment must be between at least 500,000 and 1,000,000 US dollars are, depending on the employment situation in the relevant geographic area. The permanent residence permit is only issued after two years if the promised investment is actually made and jobs have been created during this time.

Permanent residents have a number of advantages over visa holders if they want to allow their non-American family members to join the United States in the course of family reunification . However, their options do not match those of US citizens. The following table shows the rights of visa holders, permanent residents (green card holders) and US citizens (citizens) in comparison.

A comparatively small number of people obtain the green card through an application under the Diversity Immigrant Visa program , the so-called “Green Card Lottery”. This program was created against the background of the political desire to receive more immigrants from certain countries of origin, from which otherwise only a few immigrants come. Many countries are excluded. B. the United Kingdom . The selection of the applicants takes place after they have qualified by way of the raffle . Applicants who are accepted can enter the United States on an immigrant visa without a job offer; the visa will later be replaced by a green card.

From the green card to American citizenship

Due to a revision of Sections 328 and 329 of the Immigration and Nationality Act (INA), members of the US armed forces who are permanent residents have been able to apply for US citizenship more quickly (Accelerated Citizenship) since September 11, 2001 .

Accelerated Citizenship became known to a wider public through the documentary The Short Life of José Antonio Gutierrez . The film reports that around 32,000 so-called green card soldiers have been fighting for the United States in Iraq since 2003 . Gutierrez was the first of these foreign soldiers to die in that war in Iraq. He was granted American citizenship posthumously .

The following table shows the rights of visa holders, permanent residents and US citizens in comparison.

The following rights are completely independent of immigration status: