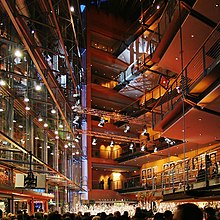 The anniversary Berlinale was mainly characterized by the move to Potsdamer Platz . The theater on Potsdamer Platz , where musicals are played for the rest of the year, was renamed “Berlinale Palast” for the time of the Berlinale and the venue for all premieres of the competition. The “ Cinemaxx ” and the “ Cine Star ” in the “ Sony Center ” were added as new venues . The old premiere cinema of the “ Zoo Palast ” competition became the venue for the premieres of the children's film festival and “Panorama Spezial”.

The following films faced the judgment of the international jury in the program of the official competition in 2000 :

The French actress Jeanne Moreau received the Honorary Golden Bear for her life's work . She was also honored with a retrospective of her best films.