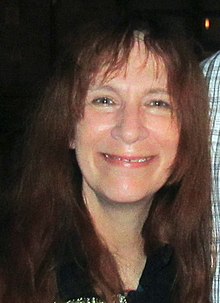 Amanda Plummer is a daughter of actors Christopher Plummer and Tammy Grimes . Her parents separated three years after she was born. She grew up with her mother in New York, where she attended the École Francaise and the United Nations High School. She dropped out of studies at Middlebury College .

Plummer made his debut as a film actress alongside Scott Glenn , Diane Lane and Burt Lancaster in the Western Two girls and the Doolin Gang from the year 1981. In the comedy Hotel New Hampshire (1984) with Rob Lowe , Jodie Foster and Nastassja Kinski played she a terrorist trying to warn the Berry family about their comrades. Plummer was nominated for a British Academy Film Award in 1992 for her role in the drama King of the Fishermen (1991) directed by Terry Gilliam, starring Jeff Bridges and Robin Williams . Her role in the television drama Miss Rose White (1992), in which she starred opposite Kyra Sedgwick , earned her an Emmy in 1992 and a Golden Globe nomination in 1993 . She received an American Comedy Award nomination for her role in Pulp Fiction (1994). In the thriller Butterfly Kiss (1995) by Michael Winterbottom , she took on a leading role alongside Saskia Reeves .

Plummer won a Tony Award in 1982 for the play Agnes - Angels in Fire, in which she appeared alongside Elizabeth Ashley and Geraldine Page . The year before, she had already been nominated for this award for her role in A Taste Of Honey . Another Tony nomination brought her in 1987 her lead role in the play Pygmalion , in which she played "Eliza Doolittle".

In 2013 she took on the role of "Wiress" in the science fiction film The Hunger Games - Catching Fire .

Actress Elaine Taylor , her father's third wife, is her stepmother.