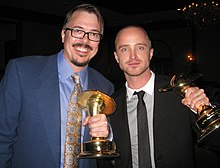 Vince Gilligan and Aaron Paul each with a Saturn Award (2010)

The Saturn Award is an American film and television prize awarded annually by the Academy of Science Fiction, Fantasy & Horror Films . The Academy was founded in 1972 by film historian and Dracula expert Donald A. Reed . This award has been given to outstanding achievements in the genres of science fiction , fantasy and horror since 1973 . From 1995 the genres of thriller , action and adventure were added.

In the first few years, the winners of the Saturn Awards were able to take home a golden roll of parchment ("Golden Scroll") as a trophy. This was replaced in 1977 by a Saturn surrounded by a film band . The last award so far took place on September 13, 2019 in Hollywood .

Records in the field of film

The most successful films

Star Wars has been the most successful film of the Saturn Awards since 1978 with a total of 13 awards. Again a double-digit number was only able to reach Avatar - Departure to Pandora with ten honors in 2010 . Third place is shared by Aliens - The Return , The Lord of the Rings: The Return of the King and Star Wars: The Force Awakens , each with eight prizes.

The most successful filmmakers

James Cameron is the most successful director with five Saturn Awards. He received the first in 1987 for Aliens - The Return . Steven Spielberg follows closely behind with four directing awards. He received his first in 1978 for Close Encounters of the Third Kind . Peter Jackson can look back on three awards in this category . In 2002 he was first honored for The Lord of the Rings: The Companions .

In the best script category, Christopher Nolan leads the ranking with four awards. Cameron and William Peter Blatty share second place with three wins each. Paul Hirsch was the only one to receive two awards for the best cut.

John Williams has received eight awards for his composed music. Danny Elfman follows with six awards. James Horner , Alan Silvestri and Hans Zimmer can look back on at least three awards in this category. Dan Hennah , Rick Carter and Robert Stromberg each have two victories as best production designer .

Rick Baker is the most successful makeup artist with seven awards. They are followed by Ve Neill and William J. Tuttle with four wins each.

The most successful performers

With four awards in the best leading actor category , Robert Downey junior can call himself the most successful actor at the Saturn Awards. He is followed by Mark Hamill with three and Jeff Bridges and Harrison Ford with two awards each in this category. Robin Williams won an award each for Best Actor and Best Supporting Actor, and Andy Serkis , Burgess Meredith and Ian McKellen each received two awards for Best Supporting Actor.

Taking into account the young talent awards , Tom Holland can look back on three and Elijah Wood , Tobey Maguire , Haley Joel Osment and Chloë Grace Moretz on two awards each.

The most successful series

Awards have been given in the television sector since 1990. The series The Walking Dead has been the most successful across all categories with 21 Saturn Awards. Breaking Bad received twelve awards and Lost has won eleven Saturn Awards.

The most successful performers

Actor awards have only been awarded since 1997. Across all categories, Anna Torv is the most successful actress with four awards for her portrayal in Fringe - Borderline Cases of the FBI . David Boreanaz for Angel and Aaron Paul for Breaking Bad can each look back on three Saturn Awards. If you add the prizes for young talent, then Chandler Riggs also has a total of three wins for The Walking Dead .

The presentation of the Saturn Awards is accompanied annually by different moderators or actors or other greats from the genre. Founder Donald A. Reed acted as moderator as did William Shatner or Mark Hamill . The regular presenter is Jeff Ross , who was awarded an honorary award for his work in 2012.