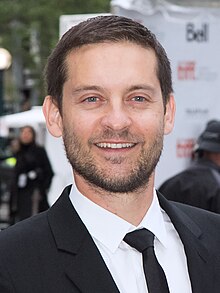 Tobey Maguire's father Vincent was a chef but left the family two years after Tobey was born. During his childhood, Maguire often changed residence with his single mother and lived among others. a. in California , Oregon and Washington .

In 2007, Maguire said in an interview with the magazine “Player” that he had changed schools twelve times during this time and that the constant new beginnings had caused him to lose a large part of his self-confidence, and eventually even to have stomach problems. He became addicted to alcohol at an early age, but at the age of 19 defeated the addiction with the help of Alcoholics Anonymous , to which he publicly confessed. Maguire wanted to be a chef like his father, but his mother offered him $ 100 if he took acting instead of high school home economics . He accepted this offer.

After he had finally left school after the ninth grade, appearances in various commercials and small supporting roles in television series followed. 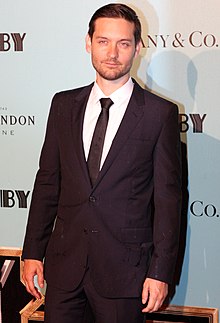 While auditioning for the television series Parenthood , Maguire met Leonardo DiCaprio , with whom he is now close friends.

In 1992 Maguire got his first lead role in the television series Great Scott! . A year later he got a role alongside DiCaprio and Robert De Niro in the feature film This Boy's Life . While the film represented the breakthrough in the film business for DiCaprio, Maguire had to be content with roles in television films afterwards. It wasn't until his collaboration with Ang Lee in The Ice Storm , a work about the sexual revolution of the 1970s, that Maguire became better known in 1997. Woody Allen became aware of him and cast him in his film Deconstructing Harry .

He got into negative headlines when the director R. D. Robb wanted to release the short film Don's Plum , contrary to the agreement with the main actors DiCaprio and Maguire. In the spontaneously created film, both actors were talking about supposedly objectionable topics at a bar. This was followed by a brief appearance in Fear and Loathing in Las Vegas and the leading male role in Pleasantville - Too good to be true , before he played the role of "The Work of God & Devil's Contribution" in Lasse Hallström's Oscar- winning film based on John Irving 's novel of the same name. Homer Wells ”starred alongside Michael Caine . Through this role Maguire's reputation was consolidated as a talented actor, he by continuing to work with Ang Lee in the Civil War drama Ride with the Devil and his role in The Wonder Boys alongside Michael Douglas and Robert Downey Jr. confirmed.

Maguire played major leading roles in Seabiscuit - With the Will to Success as well as in the comic book adaptations Spider-Man and Spider-Man 2 . For the first of the Spider-Man films, Maguire trained for six months to get his body in shape for the role of superhero . For his jockey role in Seabiscuit , he immediately lost ten kilograms in order to look as thin and light as possible.

The film Spider-Man 3 , in which Maguire played the leading role again, was shown in German cinemas on May 1, 2007. Contrary to what was initially stated otherwise, Maguire and his film partners Kirsten Dunst and Sam Raimi announced in January 2010 that they had dropped out of production for further Spider-Man films. The reasons given were differences about the script and the rejuvenation of the protagonist. The film start of the fourth part of the series was postponed to summer 2012, but it has now been filmed with other actors.

In 2013, he starred alongside his close friend Leonardo DiCaprio in Baz Luhrmann's 3-D novel adaptation The Great Gatsby . After that he was seen in several productions in 2014, in 2015 and 2016 he did not appear as an actor, in 2017 he could be heard in the original in The Boss Baby .

Maguire has also worked as a producer on such films as Spike Lee's New York film 25 Hours . He is also the owner of the production company Material Pictures.

Maguire has been a staunch vegetarian since 1992 and has been vegan since 2009 .

As a professional poker player , Maguire has already won over $ 200,000 in prize money. In June 2011 he was charged with illegal gambling.

Tobey Maguire was dubbed by Florian Bauer in The Ice Storm and God's Work & Devil's Contribution . Most of the time, however, his standard German voice is that of Marius Clarén .