The title of this article is ambiguous. Further meanings are listed under John Irving (disambiguation) . 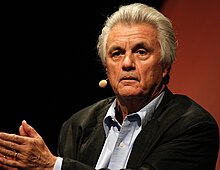 John Irving was as John Wallace Blunt, Jr. born. He was named after his father, a fighter pilot . However, his mother, Helen Frances Winslow, a nurse , divorced before their son was born. The name was changed at the age of six after his stepfather, Colin Franklin Newell Irving, a professor of Russian history, adopted him. John began wrestling and writing at the age of 14 , but had great difficulties at school because of his dyslexia . At the age of 19 he knew what he wanted: wrestling and writing novels. (Quote: "Writing is like wrestling. You need discipline and technique. You have to approach a story like an opponent." No evidence )

Irving studied English literature at the University of Pittsburgh from 1961 , then, in 1962/1963, spent two semesters in Vienna , where he had the idea for his first novel: He spent his time in the zoo and in coffee houses (because it was too cold in his room was) drove motorcycle, read the Tin drum by Günter Grass and wrote, inspired by it, his first book , let the bears go! , which appeared in 1968. After his time in Vienna, Irving went to the University of New Hampshire , where he graduated with a bachelor's degree in 1965 . He received his Master of Fine Arts from the University of Iowa in 1967 and then took up a teaching position at a college in Vermont .

Since, after his third novel, he was of the opinion that his previous publisher was not giving him enough support, he brought out his fourth book Garp und wie he saw the world with another publisher and thus achieved his breakthrough. The novel tells the life story of the writer TS Garp and his feminist mother. The success was so overwhelming that Irving was henceforth able to devote himself entirely to writing and gave up teaching.

In 1999 he wrote the screenplay for his novel God's Work and Devil's Contribution himself, after he had distanced himself from the film for his novel Owen Meany the year before and had the title changed to Simon Birch . Irving has received several awards for his script, including an Oscar .

As a decoupling from the novel Widow for a Year (1998), his first children's book appeared in 2003, A noise, as if someone tries not to make a sound with drawings by Tatjana Hauptmann .

John Irving has two sons from his first marriage and is in his second marriage since 1987 to his agent, with whom he has another son. He lives alternately in Vermont and Toronto . In 2019, he also took on Canadian citizenship.

The most unlikely, often extremely bizarre and macabre incidents, which at the same time turn into the hilarious, characterize John Irving's novels. The tone is tragicomic; social taboos are broken. These multiple exaggerations and distortions lead to grotesque satires on American society. Another main topic are the ups and downs of interpersonal relationships, which he mostly portrays bluntly and blatantly: “... I've always written about people who have to live with any kind of loss - regardless of whether they have lost a part of their body, a loved one or Children. If there are topics that repeat themselves over and over again in almost all of my books, it is the topics of loss and violence that happen bizarre and completely unexpected. Every damn day I see things in my imagination that are more terrible than September 11th . "

On the day before his 70th birthday in 2012 , a German documentary about Irving's life was released in cinemas under the title John Irving and how he sees the world .

In the film adaptation of Garp and How He Saw the World, Irving played a supporting role as a referee directing a school match, and a station master in God's Work and the Devil's Contribution .