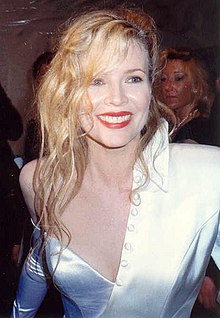 Kim Basinger at the 1990 Academy Awards

Basinger was born the third of five children to jazz musician and World War II veteran Don Basinger and his wife Ann, who had acted as a synchronized swimmer in Esther Williams films. Basinger was familiar with show business from childhood. She has two brothers and two sisters. Her family has German , Swedish and Scottish-Irish ancestors and belonged to the Methodist denomination.

In her youth, Basinger received ballet lessons and was a member of her school's cheerleading team. At the age of 17, she won a beauty pageant in Georgia . In the early 1970s, Basinger went to New York , where she had previously signed a contract with the Ford Model Agency . Although she made good money with her work as a photo model , after a while she lost interest. With the desire to reorient herself professionally, she began to take private acting classes. She had her first small appearances on the theater stage and as a singer in various clubs in New York's Greenwich Village .

In 1976 Basinger moved to Los Angeles and first tried to gain a foothold as a television actress in Hollywood . She played her first roles in television films and series such as Charlie's Angels . She made her film debut in 1981 in the film drama Jodie - Somewhere in Texas , in which she played the lead female role. Her first breakthrough as a film actress came in 1983 as Bond girl Domino Petachi in the James Bond film Never Say Never next to Sean Connery and at the latest on the side of Mickey Rourke in the controversial erotic film 9½ weeks (1986), with which she was above all became a sex symbol of the 1980s through a much-cited striptease interlude to Joe Cocker's You Can Leave Your Hat On .

Basinger 1989 at the American Film Festival in Deauville

In 1989 she appeared in Tim Burton's comic adaptation Batman , in which she replaced her fellow actor Sean Young in the female lead at short notice and so she was used as photojournalist Vicky Vale on the side of Jack Nicholson and Michael Keaton . The film grossed over $ 400 million at the box office, making it the most commercially successful film project in Basinger's career. Moreover Basinger acts on the album Batman by Prince with the four songs movie quotes the actress KRIWET sampled . In the early 1990s, she took on the female lead in the films The Blonde Temptation (next to Alec Baldwin ) and Eiskälte passion (next to Richard Gere ).

In 1992 she dropped the lead role in Basic Instinct , which Sharon Stone eventually got. In 1993 she took on the lead role in the heist movie Karen McCoy - The Cat , which flopped catastrophically at the box office. In 1994 she starred again in the erotically charged thriller Getaway at the side of Alec Baldwin, with whom she was also married at the time. In 1997 she achieved great success as an actress with the neo-noir L.A. Confidential , set in the 1950s and directed by Curtis Hanson . For the role of call girl Lynn Bracken, she won an Oscar in 1998 in the category Best Supporting Actress. This made her the first former Bond girl to win this award.

At this time, at the latest, Basinger was one of the best-paid Hollywood stars. She received a fee of five million US dollars for the film I dreamed of Africa (2000). However, the film turned out to be a big flop. In 2002 she played in the musical drama 8 Mile - again directed by Curtis Hanson - the alcoholic mother of the protagonist played by Eminem . The film became a commercial success and also received an Oscar for Best Movie Song . In the following years, various leading and supporting roles in the films Final Call - When He Hangs Up, She Must Die (2004), The Sentinel - Whom Can You Trust? (2006) and On Burning Earth (2008).

In 2010 she played alongside young actor Zac Efron in the drama Miraculous . In the following years at the latest, Basinger's acting career reached a low point: at that time she hardly played any significant or commercially successful productions, such as the in Germany set and little noticed independent film At Any Price (2014), in which she played a Woman played who, after several miscarriages, wants to illegally procure a child. She was also unlucky with her role of business partner and former lover of Christian Gray in Fifty Shades of Gray - Dangerous Love (2017), which she also embodied in the third part of the film series - Fifty Shades of Gray - Liberated Lust ; Although the film was a financial success, but Basinger was for her performance in 2018 at the presentation of the Golden Raspberry Awards for Worst Supporting Actress awarded. 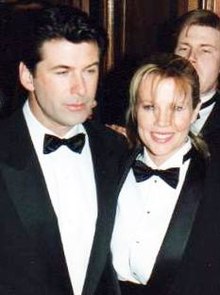 Kim Basinger with Alec Baldwin at the César Awards in 1994

Basinger was married to make-up artist Ron Snyder from 1980 to 1989 , whom she met in 1980 while filming the film Jodie - Somewhere in Texas . In 1993 she married her film partner Alec Baldwin. From this marriage, which ended in divorce in 2002, their daughter Ireland Baldwin (* 1995), who is now a well-known model in the USA , comes from .

Since the decline of her film career, Basinger has primarily devoted herself to animal welfare . Together with Priscilla Presley , she campaigns against the consumption of dog meat in Asian countries.