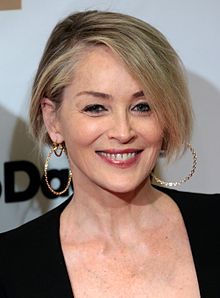 Joseph and Dorothy Stone's daughter has three siblings: Kelly, Mike and Patrick. She left Meadville in 1977 for New York to work as a model .

Her acting career began in 1980 with a role in Woody Allen's Stardust Memories . Then she gave the "beautiful woman at the side of the hero" in films such as Police Academy 4 , Action Jackson and 1990 in Total Recall - Total Recall with Arnold Schwarzenegger . She became famous in 1992 for her role in Paul Verhoeven's erotic thriller Basic Instinct , for which she received a nomination for the Golden Globe , but also for the Golden Raspberry . The US cultural scientist Camille Paglia , on the other hand, praises her figure as “a great vamp, like Mona Lisa, a kind of pagan goddess” ( “a great vamp figure, like Mona Lisa herself, like a pagan goddess” ).

Sharon Stone suffered a massive cerebral haemorrhage at the end of September 2001 and was in mortal danger in the intensive care unit for nine days. It then took her two years to learn to walk, see, speak and read again and to find her way back to life. Since then she has mostly only made guest appearances.

In 2004 she tried a comeback with the film Catwoman on the side of Halle Berry . The film flopped with critics and audiences alike. At the end of December 2005 she took part in two episodes of the Turkish series Kurtlar Vadisi ; She donated her fee to tsunami victims. In 2006 a sequel to Basic Instinct was released under the title Basic Instinct - New Game for Catherine Tramell . While Stone earned praise for its portrayal, the film failed to meet the commercial expectations placed in it.

In addition to films, she also appeared as a guest star in various series. In 1984 she had an appearance in the series Magnum , where she starred at the beginning of the 5th season in the double episode Schwarzer Spiegel (O: Echos of the mind). In 2003 she was seen for three episodes in the series Practice - The Lawyers . In 2010 she was part of the Law & Order ensemble for four episodes : Special Victims Unit . In 2012 she was to play the femme fatale again in the erotic thriller Attachment, directed by Tony Kaye ; however, the film has not been released (as of March 2015).

From 1984 to 1987 she was married to the television producer Michael Greenburg. Her marriage to journalist Phil Bronstein , entered into in 1998 , was divorced in 2004. Stone has three adopted sons.

Following the May 2008 earthquake in China , Sharon Stone told journalists at the Cannes Film Festival :

“I was thinking about how we should deal with the Olympic Games because they are not nice to the Dalai Lama , who is a good friend of mine. And then there was this earthquake and everything else and I thought, is that karma ? If you're not nice, bad things happen to you. "

The comment aroused some fierce criticism. The Hong Kong Filmmakers' Association protested, the cinema operator UME Cineplex no longer wanted to show films with Stone, and the advertising company commissioned by Christian Dior had posters in China that showed Stone removed. Dior eventually published an apology on her behalf. 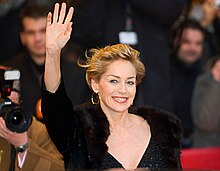