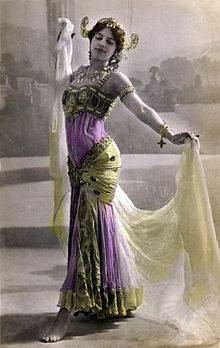 The femme fatale [ fam faˈtal ] ( French for "fateful woman") is a particularly attractive and seductive type of woman who - with magical - demonic features - erotically binds men to himself, but also manipulates them , undermines their morals and mostly them also falls into disaster in a " fatal " way. At the same time, she promises the seduced man the highest level of love fulfillment , which often gives her an extremely ambivalent character. Femme fragile is the conceptual counterpart.

Based on a poem by John Keats , this type is also known as La Belle Dame sans Merci or, related to vampire mythology , as vamp .

The femme fatale in mythology, art and literature 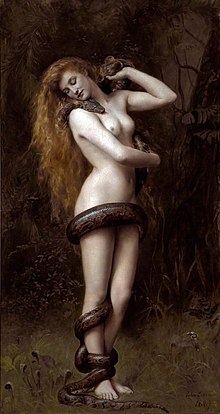 “In myth and in literature the type of femme fatale has always existed, because myth and literature are only the poetic reflection of real life; but in real life there has never been a lack of more or less perfect examples of domineering and cruel women. "

The motif of the demonic seductress has permeated all literature since ancient Babylonian times:

The femme fatale is also a motif of various folk tales . A well-known example of this is the poem about the Loreley written by Heinrich Heine . Further examples are von Kleist 's Miss Kunigunde ( Das Käthchen von Heilbronn ) , from Friedrich de la Motte-Fouqué the mermaid Undine , von Eichendorff the Countess Romana and Countess Diana, from ETA Hoffmann Der Elementargeist , from Émile Zola the cocotte Nana and von Oscar Wilde the dancing daughter of Herodias in Salome .

The most famous stage work with a femme fatale is the opera Carmen by Georges Bizet ; it takes up a work by Prosper Mérimée .

A whole series of vamps appear in Gerhart Hauptmann's dramas. One of the best-known examples was created by Frank Wedekind with the nanny Lulu , the prototype of the modern vamp ( earth spirit ; Pandora's box ). Alma Mahler-Werfel , married to Gustav Mahler , Walter Gropius and most recently Franz Werfel and at times lover of Oskar Kokoschka , was considered to be the embodiment of the fin de siecle type .

Examples from the early 20th century are the “artist” Rosa Fröhlich (in Heinrich Mann's Professor Unrat ), Alpha (in Robert Musil's Vinzenz and the girlfriend of important men ), Temple Drake (in William Faulkner's Die Freistatt ), Alraune (in Hanns Heinz Ewers ' Mandrake: The Story of a Living Being , filmed six times between 1918 and 1952) and the Mountain Queen (in ETA Hoffmann's Die Bergwerke zu Falun ).

The cultural historian Camille Paglia sees the femme fatale as the most important figure among the “demonic archetypes of the feminine who stand for the uncontrollable closeness of nature”. “The further nature is pushed back in the west, the more frequently the femme fatale appears: as a return of the repressed. She is the result of the bad conscience that the West has towards nature. "She is an" extrapolation from the biological circumstances of women ", appears" as a Medusian mother or as a frigid nymph [...]. Her cool aloofness lures, fascinates and destroys. She is not a neurotic, at most a psychopath. [...] it is characterized by an amoral callousness, a calm indifference to the sufferings of those whom it attracts and in whom it impassively observes the effects of its power. "It is" threatening because it remains calm, serene and paralyzing. Their remaining is a demonic burden, [...] it is a sting, the epitome of rebellious, corrupted sexuality. Your sting remains. "

The femme fatale in the film

The type of femme fatale has appeared in films since the silent era . Actresses who have portrayed such characters repeatedly are, for example, in the USA. B. Theda Bara , Alla Nazimova and Gloria Swanson (1899-1983), and in Germany Fern Andra and Pola Negri . A characteristic German film example is Robert Wiene's expressionist film Genuine from 1920, in which the femme fatale literally drinks the blood of the men who fall for her erotically, thus explaining the etymology of the word “vamp” in a memorable way .

According to the film journalist Robert Porfirio, sexual humiliation is a common expressionist motif and at the same time typical of the romanticism of the fin de siècle . This motif appears in Expressionism "often in the form of a femme fatale who captivates a respected member of the bourgeoisie and forces him to publicly humiliate". One can see in it the “wages of sin”, but at the same time it goes well with the expressionist interest in the representation of extreme emotional states that are connected with libido and guilt. Robert Porfirio comments on the examples of respected professors who put on their femmes fatales silk stockings or varnish toenails in the films: "The ritual tone of these acts of humiliation suggests commonalities between Freudianism, Expressionism and Film Noir in their combination of sex, sadism and fetish".

The femme fatale is the central female figure in American film noir of the 1940s .

Since then, the characteristics of the femme fatale have been:

The boundaries between the stereotypes “femme fatale”, “ femme fragile ”, “ child woman ” and “ good bad girl ” are fluid. The above characteristics are also attributed to female figures who are at the same time or first characterized as fragile or minors. Also because characters change in the course of the story, it is often difficult to classify them precisely. Passive, vulnerable, injured or victim figures (which are more likely to be counted as “fragile” or “childlike”) and active “perpetrators”, mature, self-determined (ie more “fatal”), merge again and again. Examples of this intermingling include a. the "Lolita" figures based on Vladimir Nabokov's Lolita (novel) , as well as:

The femme fatale in the new media

The figure of the femme fatale also appears in new media , for example in video games . An example is the Max Payne game series , in which an ex-police officer named Max Payne in search of revenge and justice, driven by his love for Mona Sax, shoots his way through the New York mafia, only to end up to fail.

The American singer Britney Spears released her seventh album on March 25, 2011 under the title Femme Fatale .

“Femme fatale” is also the theme of the song of the same name by The Velvet Underground . Lou Reed wrote this song through Edie Sedgwick at the request of Andy Warhol .

The band Rammstein released an album called Rosenrot in 2005 , which contains a song of the same name , which was released in the same year as the second single from the album. It depicts the brief relationship between a very young “femme fatale” - namely a girl still - and a man - according to the music video: a monk.