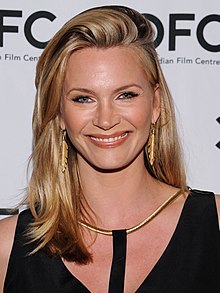 Natasha Henstridge grew up in Fort McMurray , Alberta . At the age of 14, she left home and began a career as a model in Paris . At the age of 15, she was already on the cover of the French edition of Cosmopolitan magazine. Shortly thereafter, appearances in commercials and various international fashion magazines followed.

Henstridge made her acting debut in 1995 in the science fiction film Species . A year later she had another success with her role as Alex Minetti in the action film Maximum Risk alongside Jean-Claude Van Damme . In 2008 she starred in the video game Command & Conquer 3: Kane's Revenge . In 2017 it became known that she was allegedly sexually molested by film director Brett Rattner.

On August 26, 1995, Henstridge married fellow American actor Damian Chapa , but divorced him after only ten months. She has two sons with her long-time fiancé Liam Waite , with whom she was in a relationship from 1996 to 2004. On Valentine's Day 2011, after a seven-year relationship, she married her partner Darius Campbell - but separated from him again in 2013. The marriage ended in divorce in 2018.