Grillparzer is a redirect to this article. See also: Grillenparz or Marion Grillparzer .

Franz Seraphicus Grillparzer (born January 15, 1791 in Vienna ; † January 21, 1872 ibid) was an Austrian writer who was primarily a dramatist. Due to the identity-creating use of his works, especially after 1945, he is also referred to as the Austrian national poet .

He grew up with his heavily indebted parents and siblings in Vienna in a feudal house on the farmers' market and studied law at the University of Vienna . After graduating in 1811, he was first a private teacher, then a civil servant, and in 1813 he started as a concept intern at the k. k. Hofkammer in the Austrian civil service. In 1821 he applied unsuccessfully for the position of scriptor in the imperial private library. He was transferred to the Ministry of Finance in 1821, and in 1832 he became archive director at the k. k. Hofkammer, later the Ministry of Finance. He held this position until he retired in 1856.

His educational years fell in the time of the French Revolution and the Napoleonic era, the effects of which were even less to be kept away from Austria, as the traditions of Josephinism were still alive at that time . Grillparzer was in an ambivalent situation with his urge to create and poetic education, as he leaned towards conservatism and yet noticed the intellectual pressure and the violent educational reaction under the Franz I government . On the one hand, this took up the intellectual achievements of Sturm und Drang and classical literature; on the other hand, any conflict with the prevailing system in Austria and the prevailing view of life was avoided.

In the course of his life he met Ludwig van Beethoven several times , for whom he wrote the opera libretto Melusine in 1823 , which the composer did not set to music. His memories of Beethoven are among the most important sources of Beethoven's biography. In March 1827, at Anton Schindler's request, he also wrote the funeral speech for Beethoven, which the actor Heinrich Anschütz gave at the funeral.

Grillparzer, who composed himself, thought intensively about music throughout his life. In his diaries and records not only numerous approaches find her own - in an unconventional way, classical - music aesthetics , in which the great composers of his time (like Gioachino Rossini , Carl Maria von Weber , Giacomo Meyerbeer , Richard Wagner and Franz Liszt ) important roles get assigned; There are also numerous attempts to conceptually define the essence of the poetic through the medium of music. In this respect, his novella The poor minstrel is also a key text in the musical aesthetics of the 19th century. 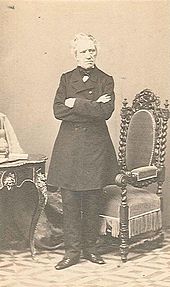 Grillparzer's work and life are the epitome of the old Austrian problematic between the union of passionate imagination and the shy of humiliation, of dream violence and fear of reality or opposition and conservatism. He suffered from the regime of Austrian State Chancellor Metternich and at the same time feared the revolution. He wanted to preserve the variegated Habsburg monarchy with its incorruptible bureaucracy and sensed the emerging nationalism. He recognized the fragility of the state system, but valued the centuries-old Habsburg principle “Live and let live!”.

Grillparzer's poetic beginnings were influenced by romanticism (which impressed him with an enduring fondness for the Spanish dramatists) and by the temporary misunderstanding of the tragic fate to which he made his sacrifice in the ancestral wife . He was able to emancipate himself relatively quickly from these influences, but not from the circumstances and educational level of his homeland.

First of all, it was a significant act of creative power and independence that the poet was able to follow his fateful tragedy Die Ahnfrau , which was performed with extraordinary success in 1817 and soon spread across all German theaters, in 1818 by a work as completely different as Sappho . In the Sappho (Vienna 1819) he first placed himself on the ground of the purely human, as he understood and understood it. There was an unmistakable quietistic element in his conception : whoever leaves the ground of the given, simple conditions, exceeds the circle of the next duty, falls for powers that he cannot subdue.

In Grillparzer's view of the world, human passion is excluded as a noble, lofty, undreamt-of powers awakening, capable of purification. Therefore, on the one hand, he was able to closely follow the clear development and design of the material, the beauty of form of classical poetry and, on the other hand, remained separated from it by a deep gap. Mediation took place only in the portrayal of love as the most natural, inevitable and noble passion. The main strength of Grillparzer lay in the development of the feeling of love into a dramatic plot, which is why in a certain sense the tragedies Sappho and Des Meeres and the waves of love (which deals with the saga of Hero and Leander ) can be considered his most accomplished works.

From 1821, when the trilogy Das Goldene Vlies (Vienna 1819) was successfully performed in the Vienna Hofburgtheater , the last part of which, the tragedy Medea , quickly spread across all German stages and asserted itself on the boards through the heroine role of the title, Grillparzer counted for about a decade among the favored playwrights.

In 1825 the tragedy of King Ottokar's Glück und Ende (Vienna 1825), 1828 A loyal servant of his master (1830), 1831 Des Meeres und der Liebe Waves (1840), 1834 the drama The Dream of a Life (1840) with success in the Vienna Burgtheater listed. The criticism that became dominant and authoritative in the German states after 1830 was hostile to Grillparzer; its merits were of no importance to her, the young German criticism knew how to emphasize its shortcomings .

Grillparzer himself suffered from the unfavorable conditions in his home country. He remained only the groom of his youthful lover Katharina Fröhlich for life because (as his cousin Hippolyt von Sonnleithner reports) “he lacked the courage to marry”. Every major trip (1819 Italy, 1826 Germany, 1836 Paris, 1843 Athens and Constantinople ) made the contradiction between his ideals and the domestic conditions clear to him.

Despite his undoubted loyalty, he had to struggle with the pressure of censorship under Josef von Sedlnitzky . Many of his poems were suppressed, the emperor himself tried to sabotage the printing of A faithful servant of his master by buying the piece privately.

Grillparzer's loneliness and his strange relationship to Viennese theater life manifested themselves on the occasion of the premiere of the play The dream of a life in September 1834. Karl Ludwig Costenoble writes in his diary:

Count Czernin left the casting of “Traum ein Leben” to the discretion of Grillparzer, who suggested the heroic father Anschütz for the role of the intriguer . When Deinhardstein drew his attention to this mistake and said that the role was due to La Roche , Grillparzer replied: “I don't know La Roche. I haven't been to a theater for ten years. I only choose the actors I know! "

Finally, in 1838, there was a formal defeat in his comedy Weh dem Who Lies (Vienna 1848) at the first performance in the Burgtheater. Grillparzer decided to withdraw from the public without renouncing the practice of poetic art. In the following decades the dramas Libussa , Die Jüdin von Toledo , Ein Bruderzwist in Habsburg as well as the atmospheric fragment Esther and numerous lyrical poems emerged.

Of his stories, the framework stories The Monastery at Sendomir (1827) and The poor minstrel (1847) are known.

Tomb in the Hietzing cemetery

It was not until 1848 that individual poetic achievements by Grillparzer reached the public again, such as the poem of praise to An Radetzky ("Good luck, my general, do the prank! Not just for the glimmer of fame - Austria is in your camp!"). Around 1850 people in Austria began to become conscious of the poet they had in Grillparzer. The aging man experienced honors and recognitions, was appointed a member of the Imperial Academy of Sciences in 1847 and was awarded several medals. In 1859 he was awarded an honorary doctorate by the University of Leipzig on the occasion of the Schiller Festival, in 1861 he was made a lifelong member of the Austrian manor house and in 1864 an honorary citizen of his hometown Vienna .

He died at the age of 81 on January 21, 1872 in his house ( Vienna-Innere Stadt , Spiegelgasse 21) and was buried in the Währinger local cemetery (today Währinger Schubertpark ). After the cemetery was closed in 1873, Grillparzer's remains were transferred to the Hietzing cemetery in 1879 and reburied in an honorary grave (group 13, number 107).

The complete edition of his works was published in 42 volumes in 1909–1942 by Verlag Anton Schroll & Co.

Grillparzer all works , edition by Cotta-Verlag

Dramas
Blanka of Castile  | The ancestress  | Sappho  | The golden fleece : The host , The Argonauts , Medea  | King Ottokar's luck and end  | A faithful servant of his master  | The waves of the sea and love  | The dream of a life  | Woe to him who lies!  | Libussa  | A brotherly dispute in Habsburg  | Esther (fragment) | The Jewess of Toledo

Novellas
The monastery at Sendomir  | The poor minstrel