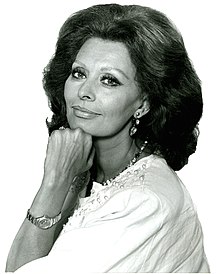 With appearances as an extra , for example in the American epic Quo Vadis , which was filmed in Cinecittà in Rome, a development began that quickly made Loren an international film star. She got her first leading role in White Woman in Africa . In the following years she could count on the support of the film producer Carlo Ponti , who signed her, later married and remained her producer for a lifetime. Between 1957 and 1964, Loren consolidated her position as a top star with Hollywood productions such as Houseboat and It Began in Naples, as well as winning an Academy Award for Best Actress ( And Yet They Live ). Her film partners have always been well-known acting colleagues; Especially with her compatriot Marcello Mastroianni she celebrated many successes. Most recently, after a long period of television appearances, Loren appeared again in movies, e. B. in Prêt-à-porter (1994) and Nine (2009).

Loren grew up in poor circumstances in the small town of Pozzuoli and in Naples . Her father Riccardo Scicolone did not marry her mother Romilda Villani even after the birth of Sophia's younger sister Maria and left the family. The mother tried to capitalize on Sophia's beauty to support the family. Sophia was allowed to take part in contests, worked as a model in the photo novels popular in Italy at the time and received extras in films.

In 1950, she finished second in the Miss Rome beauty contest and met her future husband, the Italian film producer Carlo Ponti , 22 years her senior . This promoted her from then on and invented the name Sophia Loren for her .

In 1957 Loren went to Hollywood on the initiative of Ponti and stood in front of the camera with pride and passion , her first US film. She became popular with international audiences primarily through the comedy Houseboat (1958) starring Cary Grant . In 1960 she had great financial success with It Started in Naples with Clark Gable . The monumental film El Cid , which was shot in Spain in 1961 under the direction of Anthony Mann , was another step towards becoming a Hollywood star for Loren. In the USA she appeared in many, mostly comedic films, usually alongside famous screen heroes such as Anthony Quinn , John Wayne , Richard Burton , Frank Sinatra , Anthony Perkins , Charlton Heston , Paul Newman and Gregory Peck . In 1966 Charlie Chaplin hired Loren and Marlon Brando for The Countess of Hong Kong ; this was Chaplin's last film and also his only color film.

In 1960 she shot the melodrama in Italy under the direction of Vittorio De Sica And yet they live . Since then she has also been recognized as a character actress and has received countless film awards. In De Sica's war epic, she brought her own youthful experiences to the screen and credibly conveyed the pain of war.

In Italy, Loren competed with Gina Lollobrigida for a while ; like this, she was considered a bosom miracle and a sex symbol. With her film partner Marcello Mastroianni , Loren formed a dream couple in many Italian productions. She also worked repeatedly with the director Vittorio De Sica .

Loren was one of the most popular international movie stars until the late 1970s and has appeared in numerous well-known films. From 1980, the actress appeared mainly in television movies in appearance, acts occasionally but also in movies such as Prêt-à-Porter (1994) or The third spring (1995) and in Italian cinema productions as of Lina Wertmueller and her son Edoardo Ponti with . In 2009 she turned since 1996 the first time in a Hollywood movie: In the musical Nine of Rob Marshall she starred alongside Nicole Kidman , Penelope Cruz , Daniel Day-Lewis , Judi Dench and Marion Cotillard .

Loren acted in over 100 films between 1950 and 2014. Marion Degler was Loren's standard German speaker for around four decades. After Degler withdrew from the dubbing business in the mid-1990s, Loren was dubbed by changing speakers.

On February 11, 2006, during the opening ceremony of the 2006 Winter Olympics in Turin, she and other celebrities carried the Olympic flag to the Turin Olympic Stadium .

Loren caused a stir in 2007 when she posed on the Pirelli calendar . In the same year, the 72-year-old announced that she would appear again in a revealing pose when the football club SSC Naples rose. Although the club was successful, Loren did not keep their promise. On a TV show, she described her announcement as a joke.

In 2007 her husband Carlo Ponti died. Loren retired from public life for a few months. In the same year she appeared for award ceremonies and honors, when she received the “Espiga de Oro” in Spain, the “Bambi” in Germany and the “Marc Aurel Prize” in Italy for her life's work. On May 4, 2011, Loren was honored at the Samuel Goldwyn Theater in Los Angeles. She received a Lifetime Achievement Award from the Academy of Motion Picture Arts and Sciences .

Together with her husband, Carlo Ponti, who died in 2007, Loren has two children: Carlo jr . (* 1968) and Edoardo (* 1973). The family lives or lived on Lake Geneva and also owns a ranch in California, a palazzo in Rome, a chalet in Switzerland and an apartment in Trump World Tower in New York.

Loren's marriage to Ponti was considered exemplary despite the difficult legal situation in the early years. They married on September 17, 1957, after Ponti divorced his first wife, Giuliana Fiastri, in Mexico. However, Italian law did not provide for divorce and the separation of Pontis from Fiastri was not recognized in Italy; Ponti was charged with bigamy , and his marriage to Loren was officially annulled in 1962. Loren, Ponti and Fiastri then became French citizens in 1966 in order to be able to divorce and remarry under French law. After the divorce from his first wife, Ponti's marriage to Loren was finally legalized on April 9, 1966.

In 1980, Loren hit the headlines when an Italian court sentenced her to 30 days in prison for tax evasion . She began serving her sentence in Caserta Prison in May 1982.

Loren's sister Anna Maria Villani Scicolone was married to Romano Mussolini , son of the former dictator Benito Mussolini , from 1961 to 1972 . Their daughter, born in 1962, is the actress and neo-fascist politician Alessandra Mussolini . Loren promoted her niece's career by getting her roles in a number of films she starred in, such as Sin (1972), A Special Day (1977), A Little Blonde (1984) and Saturday, Sunday, Monday ( 1990). Loren also convinced her to pose for the men's magazine Playboy .

Loren is the godmother of the US actress Drew Barrymore .

Sophia Loren in Paris at the César Awards 1991

Golden Bear of the Berlinale

Order of Merit of the Italian Republic