Richard Burton , CBE (born November 10, 1925 in Pontrhydyfen , Wales ; † August 5, 1984 in Geneva , Switzerland), born Richard Walter Jenkins jr. , was a British actor . Burton, who initially emerged as a Shakespeare actor, is considered one of the most important English-speaking stage actors . He also appeared in numerous films and gained international stardom in the 1960s through his association with Elizabeth Taylor .

Richard Burton's mother died when he was two years old. He was one of thirteen children. The father's life was marked by alcoholism . The large family lived in poverty, and even after the mother's death, the struggle against general poverty remained life-defining. In 1927 - after his mother's death - Burton came to live with his sister Cecilia ("Cis"), who raised him.

Despite poor conditions, Burton made a name for himself in the acting profession because of his talent. He studied at Oxford , played in the student theater and ended up on the stage at the Old Vic . He was considered an excellent actor for Shakespeare plays. He adopted the family name as a stage name from his language teacher Philip Burton, who had driven out his Welsh accent, which was a hindrance to an international career. He made his debut in London's West End when he was nineteen . In 1949 he made his breakthrough at the Globe Theater with the play The Lady Is Not For Fire by Christopher Fry in a production by Sir John Gielgud .

In 1952 he starred with Olivia de Havilland in his first Hollywood film My Cousin Rachel , which earned him an Oscar nomination. This was followed by film successes such as Das Gewand and Blick zurück im Zorn . While he was on stage at the side of Julie Andrews in the musical Camelot in 1960 , he was engaged for the monumental film Cleopatra , in which he met Elizabeth Taylor .

From then on, Burton was in the public eye because of the checkered and scandalous relationship with his two-time wife Elizabeth Taylor. Because of her, he divorced his first wife Sybil Williams after 14 years. The movie Who's Afraid of Virginia Woolf? of 1966, like many other films in which the couple appeared together, was viewed by audiences as a projection screen for their married life.

The Taylor-Burton couple were the highest-paid actor couple in the business in the 1960s. Their total income was estimated at approximately 50 million US dollars. Much of their box office success owed these films to the curiosity of the audience that the couple, ubiquitous in the tabloids of the 1960s, wanted to see on screen together, even if many of these films were not of great artistic importance. As Burton's best achievements of this time are his roles in three films, each without the participation of Taylor: Becket (1964), The Night of the Iguana (1964) and The Spy Who Came Out of the Cold (1965).

For the film adaptation of The Fifth Offensive - Kesselschlacht an der Sutjeska (1973), which reconstructs the Battle of the Sutjeska , Burton, a top Western actor, was hired, unusual for an Eastern European film production at the time. During the filming there was also an encounter between Burton and the Yugoslav head of state Tito , who also had a reputation for being a good drinker. Burton continued to perform in the theater, but his theatrical success waned in the 1970s. Over the course of that decade, Burton increasingly appeared in films that were heavily commercial and earned him high salaries. In 1980 Camelot was revived with him in the lead role, and in 1983 he last appeared on stage with Elizabeth Taylor in the theatrical comedy Private Lives by Noël Coward .

Burton has been nominated seven times for an Oscar without ever receiving one. Only Peter O'Toole received more nominations as an actor (eight in total), also without winning the award. In 1968 Burton received a Bambi in Germany , but the authors of The Golden Turkey Awards also gave him the Worst Actor of All Time award .

Burton has appeared in nearly 70 films over the course of his career, including Who's Afraid of Virginia Woolf? , The Exorcist II - The Heretic , Steiner - The Iron Cross II and The Wild Geese are coming . In 1978, Burton lent his voice to the journalist in Jeff Wayne's musical Version of the War of the Worlds , who leads the story as the moderating narrator - a speaking role he played like no other. For this reason, its image was digitally rejuvenated in 2006 and inserted into the live show via a hologram .

His last film was in 1984 , based on the novel of the same name by George Orwell . Shortly after filming was completed, he suffered a cerebral haemorrhage in his home in Céligny , from which he died. His participation in the film Wild Geese 2 did not materialize, so Edward Fox took over the role of Burton.

Burton was often dubbed by Holger Hagen ; but Horst Schön and Ernst Wilhelm Borchert also gave him their voice on several occasions. 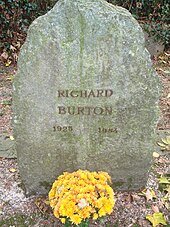 Burton's daughter Kate Burton , who also became an actress, is from his first marriage to Welsh Sybil Williams .

After the marriages with Elizabeth Taylor (1964-1974 and 1975-1976) he was married from 1976 to 1982 to Susan Hunt, the former wife of the Formula 1 racing driver James Hunt , who contributed to the fact that he reduced his alcohol consumption considerably. Burton's fourth and last wife was the press agent Sally Hay, whom he met while filming the television series Wagner - The life and work of Richard Wagner about the life story of the composer Richard Wagner and with whom he lived until his death on August 5, 1984 .

On June 13, 1970, he was appointed Commander of the Order of the British Empire by Queen Elizabeth II .

Burton died of a cerebral haemorrhage in Geneva in 1984 at the age of 58 . His grave is in the "Old Cemetery" of Céligny in the canton of Geneva .

(together with Max von Sydow for Hawaii).