Police Academy 4 - And now it's all about

Police Academy 4 - And now it's going is an American feature film from 1987. It is the fourth film in the Police Academy series. Actually, it should be filmed immediately after its predecessor. However, this had to be postponed because the director Jerry Paris had passed away. 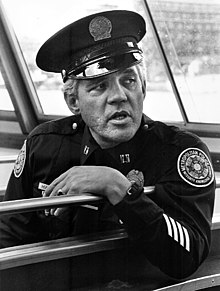 Last seen on the series: Steve Guttenberg as Carey Mahoney

In the fourth part for the first time together in front of the camera: GW Bailey, David Graf and Lance Kinsey (from left to right)

A meeting takes place in the Academy , at which Commandant Lassard, the well-known main characters, his new program Citizens on Patrol , BGP for short ("Citizens on Patrol", COP for short, as an acronym of the colloquial word for 'police officer'; see Cop ), which aims to improve the relationship between the police and the population and guide citizens to actively fight crime. The mayor and governor support the program. Lassard is even supposed to present it at an international police seminar in England .

During a meeting with Police Chief Commissioner Hurst, the district manager Captain Harris expresses objections to the program, since it also endangers the jobs of the police officers. Hurst points out that the governor thinks the program is an excellent idea, and as long as it does, he and Harris agree.

Meanwhile, advertising for the program begins. Despite the sometimes weird advertising methods, a number of participants come to register. Among them is the heavyweight Tommy "House" Conklin , who turns out to be an old friend of Hightower.

Involuntarily, the two skateboarders Arnie and Kyle take part. They caused trouble while skateboarding in a shopping center, whereupon they were stopped and arrested by Sergeant Copeland and other police officers from Harris' area. The trial is going badly for Arnie and Kyle as the judge himself was at the mall. When the verdict was announced, there was a scuffle between the defendants and their lawyer Butterworth. Mahoney manages to convince the judge to send Arnie and Kyle to BGP. The journalist Claire Mattson in the audience then accompanies BGP as a reporter. Butterworth becomes a participant in the program.

Another participant is the feisty old lady Mrs. Feldman, who lives in the retirement home and has a weakness for everything military that inspires Tackleberry .

The program cadets line up, and Commandant Lassard greets them effusively. Since he has to go to the international police conference, Commissioner Hurst has appointed a temporary director for the program. It is Harris, who immediately makes it clear that he thinks neither of Lassard's people nor of the program. Harris therefore meets with little sympathy and is the victim of numerous pranks as a result. Mahoney begins flirting with Mattson, and participant Laura and Zed also develop a romance.

The training includes shooting training and water rescue, among other things. Soon, however, Arnie, Kyle and Tommy are no longer motivated because they feel ready. The police then frighten them at night in order to convince them otherwise.

Commissioner Hurst appears at the international police conference in England to invite the representatives of the other countries on behalf of the mayor to examine BGP on site. The next day, the participants in the program start working on the streets. Mrs. Feldman is about to observe a gang that deals in stolen goods . Your attempt to arrest someone ends up with only one undercover policeman arrested instead and three months of police work in vain. The program is then temporarily interrupted.

At the same time, the foreign police representatives arrive. Harris shows them a typical police station, but when Procter plays the prisoners game " Simon says ", he lets himself be tricked and helps all prisoners to escape. The inmates lock all police officers in the cells. However, Mrs. Feldman observed the mass outbreak and immediately alerted the Academy. Lassard's men recapture one by one and free the foreign police officers.

The final section of the chase takes place in hot air balloons and double-deckers . The foreign police officers are enthusiastic. They want to thank Mahoney, but he flies away with Claire Mattson in a balloon with a Police Academy logo, and the two toast the Academy.

It is the last film with Steve Guttenberg alias Carey Mahoney and at the same time the last one that has not made it onto the IMDb's list of the worst films of all time in the recent past. However, it does worse than any of its predecessors.

Although the film was produced in direct succession to its predecessors, it is characterized by a number of special features.

The story of the film shows some inconsistencies, which is mainly due to the fact that the film has been significantly shortened for the theatrical version. For American television, however, there was a somewhat longer version. Shortening films is common, but with Police Academy 4 it also meant that relevant parts of the plot were completely lost.

The film was received significantly worse than its predecessor. It is indicative of this that the IMDb rating of 5.0 out of 10 possible points (as of December 30, 2019) is worse and the film was nominated for a Golden Raspberry for the worst film music. All previous films could win a gold screen , but this one not. The film was reviewed by 20 critics on Rotten Tomatoes , none of whom rated the film positively, which is why the film has a rating of zero percent (as of December 30, 2019).

For the last time the main characters appear in almost full cast. An era ends with this film: the character of Carey Mahoney, who played a central role in the first films and was also popular, can be seen for the last time. Most of the second generation characters also make their final appearances here: Zed and Sweetchuck, as well as the Kirkland family (with the exception of Max), all of whom were introduced in the second film. Nogata, who appeared in the third part, also has his last appearance here. Captain Thaddeus Harris returns as an antagonist , probably also because Art Metrano alias Mauser was no longer available due to a serious accident. He will continue to play this role for the rest of the series.

The only new character who will be reunited later is Tommy "House" Conklin.

Despite the general weaknesses of this film, there are notable names on the cast list:

The following people also appear in the film: