Police Academy 7 - Mission to Moscow is a 1994 American film . It is the seventh installment in the Police Academy series, but did not follow until five years after the other films in the series. It differs from the other films in numerous other details. The number 7 is also missing from the original English title. Only a few characters from the first six films are still included. It is considered the worst film in the series and is also the last for the time being.

In Germany it was released on June 16, 1994 and was relatively successful with 478,473 viewers and reached 57th place in the ranking of the most-watched films of 1995. In the USA it was by far the least successful film in the series. It was not shown in theaters, but only released on video on August 26, 1994. It grossed just $ 126,247, while all previous films grossed over $ 10 million.

To be seen as Police Chief of Moscow: Christopher Lee (here in 2007) 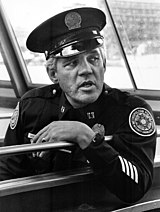 One of the few remaining actors in the core cast: GW Bailey

David Graf, one of the three actors who starred in all seven films

The computer game The Game is very successful worldwide and is distributed by the Russian businessman and nationally known figure of the underworld Konstantine Konali, who has always been able to evade prosecution. Konali intends to expand his power further. Boris Yeltsin is very angry about this situation and instructs Commandant Rakov, the Moscow police chief, to solve the problem. Rakov turns to Commandant Lassard , the head of the police school in a major American city, because Konali was already active there.

The following will take part in the operation in Moscow:

The latter is best in class, has received several awards, although he was only a cadet, and is supposed to participate as a forensics expert. However, he is struck off the list by the cadet Kyle Connors due to a computer game that failed. Instead, Connors himself is now on the list, although he actually just flew from the academy because of his fear of heights . So Connors does not receive his discharge papers from the commandant as expected, but becomes part of the team that is going to Moscow.

Lieutenant Talinsky, who heads the organized crime unit at the Moscow Police, is supposed to take care of the American police. The attractive policewoman Katrina, who Connors is immediately taken with, is supposed to act as a translator.

When getting into the cars, a mix-up occurs: Lassard accidentally gets into the wrong car, the occupants of which he believes to be the family of Commandant Rakov. Talinsky can no longer stop him. Lassard goes to a funeral with the family and spends the next few days with them. He is clueless, as he cannot communicate with his hosts either.

Talinsky tries to cover up Lassard's absence because he is responsible for him and could not prevent his disappearance. He hires a porter from the hotel to use a trick to keep the other Americans out of the room. For Talinsky, the American police officers are undesirable anyway and he wants to get rid of them as soon as possible.

Konali plans his next coup and hires the programmer Adam Sharp to program a new game called The New Game , which should give him access to all computer systems in the world. The American police disrupt the work of Konali's henchmen and investigate those around him. He therefore orders them to be murdered. His people try to shoot Jones while visiting Gorky Park , but they fail.

During an undercover assignment in a casino, Konali is enchanted by Callahan, who appears as a singer, and makes an appointment with her. Connors manages to impress Konali and is hired by him. He is employed in Konali's warehouse and discovers Adam, who tells him about The New Game . The game is almost finished.

A tip leaked by Konali about handing over money at a ballet performance turns out to be wrong. The action ends in chaos. Rakov is very angry and the police are supposed to leave the country. On departure, Callahan is kidnapped by Konali's henchmen. They manage to follow the car using a tracking device.

Konali confronts Callahan. When he learns that the police are already using The New Game , he drives to his warehouse to test access. The others storm the building and find out the truth about the game. However, Konali overwhelms Captain Harris and is able to escape. He runs into Lassard by chance in his restaurant. He thinks Lassard is trying to attack him and starts a fencing match, but Lassard wins.

In a solemn ceremony, Lassard is presented with a medal and victory is celebrated.

The film was one of the first US films to be shot in collaboration with the former Soviet Union . Therefore, most of the filming could be done on the original locations in Moscow. This unusual circumstance caused u. a. there was a filming permit for Moscow airport, which was very astonishing to the airport staff. However, the production team repeatedly encountered problems. The scene in Gorky Park where Konali's gangsters try to murder Jones led to a police operation because Michael Winslow's wireless microphone interfered with the police radio. The police officers knew the previous Police Academy films, so they stayed and watched the rest of the footage.

The shooting also took place u. a. took place during the Russian constitutional crisis of 1993 , so that the whole team had to stay in the hotel on one day of shooting because the military was on the streets and people were shooting. The film team also came under controls by the military and the police. Only demonstrations of Michael Winslow's noise imitation skills then ensured that they appeared credible and could drive on.

Parts of the film were shot with great effort. The ballet scene was carried out with a real high-class ballet ensemble and around 800 extras. The song, which was sung by Leslie Easterbrook aka Debbie Callahan in the scene on the boat, had previously been recorded by her in a recording studio.

The envelope with a check that the police take from Konali in a theater is addressed to a charity called Sunshine Kids. Captain Harris' actor GW Bailey has been a director of the Sunshine Kids Foundation , an organization for children with cancer , since 2001 .

Similarities and differences to the predecessors

The film differs from its predecessors in a number of details . Mention should be made:

Although the entire series was never received by the critics and the response to the films became increasingly catastrophic, this film represents the absolute low point of the series in this regard. It occupied a place on the list of the worst 100 films in the IMDb for a long time and is with only 3.6 out of 10 possible points (as of December 30, 2019) rated significantly worse than its two predecessors. Even with Rotten Tomatoes found to date only negative reviews (as of: December 30, 2019).

"The film manages the feat of overshadowing its predecessors in terms of lack of imagination."

The formerly extensive set of well-known characters has shrunk much more than in the two previous films. So Hightower and Hooks left the series. Even Douglas Fackler and Max Kirkland , in the sixth film had returned once more, no longer appear. The previously central figure of Nick Lassard is also no longer there. Captain Harris has to fight his way through the movie on his own, as his loyal assistant Proctor no longer shows up. Even Commissioner Hurst , who played an important supporting role up to Part 6, is no longer to be seen.

The way the figures are presented has also changed. Harris is still unsympathetic, but less staged as an opponent than in the previous films. In contrast to all previous films, Jones' sound imitations mostly lack their effect. His typical appearances, where he cheers people up with these imitations, are almost completely missing. Tackleberry hardly has any scenes in which he really uses his gun infatuation constructively.

Some new characters are established, but due to the lack of follow-up films, they could not join the circle of recurring characters. None of these characters can be found on the preliminary cast list for the planned Police Academy film.

For the first time in Police Academy there is a classic villain who is also known as such from the start. It's about the Russian mafioso Konstantine Konali, played by Ron Perlman . Furthermore, there is his brother Michael Konali ( Valery Yaramenko ) on the evil side . The American programmer Adam Sharp ( Richard Israel ) works for the Konali brothers , who has no criminal intentions himself, but is forced by Konali to develop the dangerous second version of The Game .