There is hardly any evidence

The youngest son of the textile workers Charles Scorsese (1913–1993) and Catherine Scorsese , b. Cappa (1912–1997), spent months in bed because of bronchial asthma , where he wrote his first scripts and storyboards . In 1950 the family moved to Little Italy , where Scorsese first came into contact with the Church and decided to become a priest . After the expulsion from the Jesuit school he aspired to an education as a teacher, decided at the New York University but in 1960 for the film art . With the financial support of his lecturer, Scorsese made his first award-winning short films and completed his bachelor's degree in 1965 . While doing his Masters , he worked on his feature film debut for four years, Who's Knocking on My Door? (1967). The $ 75,000 budget should ruin him financially. Scorsese taught later star directors such as Oliver Stone and Jonathan Kaplan at the university before moving to California , where he befriended Francis Ford Coppola , Steven Spielberg and George Lucas . In the fall of 1971 he made his first Hollywood film for Roger Corman , The Fist of the Rebels , which found its audience despite mixed reviews. 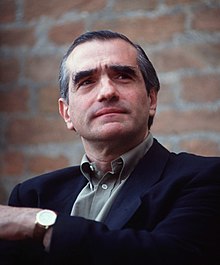 Scorsese 1995 during the 52nd Venice International Film Festival , where he was honored with the Golden Lion for Lifetime Achievement

After he was accepted into the directors' union, Scorsese shot Hexenkessel, his first commercially successful auteur film in 1973 , which made him and his actor Robert De Niro well known. Scorsese's big breakthrough came a year later with Alice Doesn't Live Here (1974), which brought leading actress Ellen Burstyn an Oscar , and with the world success Taxi Driver (1976), which won the Palme d'Or at the Cannes Film Festival . During this time, as he was hailed as the most important filmmaker of his generation, his drug addiction set in . His success was accompanied by stormy affairs and artistic heights. His idea, the big Hollywood - Musical with Liza Minnelli and Robert De Niro in the published 1977 New York, New York revive fell after two years of production by both critics and audiences. Minnelli cast Scorsese in the same year as a theater director in his Broadway debut with the musical The Act , which brought it to over two hundred performances from October 1977 to July 1978 and gave its leading actress a Tony Award . Although the 1980 boxer film Like a Wild Bull was traded as a masterpiece, Scorsese's reputation as a box office poison remained , which also flopped the vicious comedy King of Comedy (1983) at the box office. Only the campaign he initiated to restore old Hollywood films brought him positive press. Because of massive protests by religious groups, the shooting of the long-prepared Jesus film The Last Temptation of Christ in 1983 was initially canceled.

In Cannes in 1986 Scorsese was named best director for The Time After Midnight and was moved back into the limelight. His billiards drama The Color of Money grossed 130 million dollars worldwide. The Last Temptation of Christ (1988) was a respectable success despite the boycott of Christian groups. With the Thriller - remake Cape Fear (1991) and the costume drama The Age of Innocence (1993) entered Scorsese artistic territory. In 1995 he concluded his Mafia trilogy with Casino , which he had started with Hexenkessel and Good Fellas - Three Decades in the Mafia (1990). The film adaptation of the Dalai Lama's youth ( Kundun , 1997) and the New York drama Bringing Out the Dead (1999) also received critical acclaim. Scorsese reached the commercial peak of his career with Gangs of New York (2002), Aviator (2004) and Departed - Unter Feinden (2006), each with Leonardo DiCaprio in the lead role.

Although Scorsese is considered one of the most important contemporary US filmmakers, he was denied the Oscar for a long time. It wasn't until 26 years after his first nomination for Like a Wild Bull that he won the 2007 Academy Award for Departed , a US remake of the Hong Kong film Infernal Affairs . In total, the gangster epic won four Oscars with Leonardo DiCaprio, Matt Damon , Jack Nicholson and Mark Wahlberg ; it also earned him the Golden Globe Award and finally the Directors Guild of America Award , for which he was nominated for the seventh time, among others after Taxi Driver and Good Fellas .

In addition to his work as a film director, screenwriter and producer, Scorsese was also responsible for numerous documentaries. Autobiographical works such as Italianamerican (1974) include artist portraits of the Canadian- American rock band The Band ( The Band , 1978), Giorgio Armani (Made in Milan , 1990), Bob Dylan ( No Direction Home - Bob Dylan , 2005) or George Harrison (George Harrison - Living In The Material World , 2011) opposite. As an actor, Scorsese also made minor appearances in his films Gangs of New York , Taxi Driver and Aviator, as well as in Robert Redford's award-winning drama Quiz Show (1994). As a film editor, he worked on the documentary Woodstock (1970) at the beginning of his career . In 2004 he lent his voice to a character drawn after himself in the animated film Big Sharks - Small Fish .

Martin Scorsese has been married to film producer Helen Morris since 1999. It is his fifth marriage; The father of three was previously the husband of the famous Italian film actress Isabella Rossellini (1979–1983) and the film producer Barbara De Fina (1985–1991). He was also in a relationship with actress Illeana Douglas from 1989 to 1997, whom he cast in several of his films. He entrusted his daughters Domenica Cameron-Scorsese (from his marriage to the screenwriter and director Julia Cameron) and Francesca Scorsese (from his marriage to Morris), born in 1976 and 1999, with minor roles in some films. In 2003 Scorsese was honored with a star on the Hollywood Walk of Fame (6801 Hollywood Boulevard).

At the 2010 Golden Globe Awards , Scorsese was honored with the Cecil B. DeMille Award by Leonardo DiCaprio and Robert De Niro for his life's work . In the same year, he co-produced the HBO series Boardwalk Empire , for which he also took over the direction of the pilot , which led to an Emmy . The story of the rise of a US seaside resort at the time of Prohibition is based on Nelson Johnson's 2002 book of the same name, in which he described the rise of Atlantic City .

Scorsese has worked with some prominent actors on several occasions. Particularly known are:

With seven films in the IMDb's top 250, Scorsese is the most successful director in this regard, along with Christopher Nolan , Steven Spielberg and Stanley Kubrick . 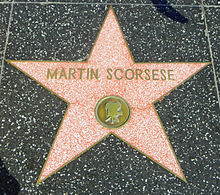 2003 star on was for Scorsese Hollywood Walk of Fame set

In 2013, the Deutsche Kinemathek in Berlin presented the world's first exhibition on the director. The show is mainly fed by Scorsese's private collection and the collections of Robert De Niro and Paul Schrader from the Harry Ransom Center at the University of Texas in Austin. In addition to his artistic work, the exhibition also recognizes Scorsese's commitment to the preservation of international film heritage , with which he builds a bridge between the history and the future of cinema.