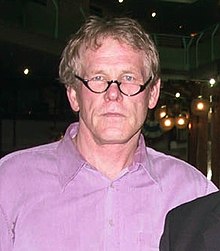 Nolte began his acting career in 1960 with the American stage company Actor’s Inner Circle of Phoenix and appeared in around 180 pieces over the next eight years.

In 1968 he appeared at the Old Log Theater in Minneapolis and with the experimental group La Mama Experimental Theater in New York City , until he moved to Los Angeles , where he settled. For a short time he studied acting with Stella Adler and performed at the Pasadena Playhouse in Pasadena .

However, he soon focused on the film and television business. Nolte had one of his first TV appearances in 1973 in an episode of the crime series The Streets of San Francisco . In 1977 he made his breakthrough with the series Reich und Arm . In the same year he also had his first box office success with the film The Depth, based on the novel by Peter Benchley . After a few successful roles in the 1980s, he rose to become a sought-after character actor. In 1991 he starred alongside Martin Scorsese's box office hit Cape Fear starring in the drama The Prince of Tides alongside Barbra Streisand . Nolte was honored with the Golden Globe and other awards for his achievement . The role also earned him his first Oscar nomination.

After some moderately successful projects, he was able to draw attention to himself again in 1997 when he took over the lead role in Oliver Stone's thriller U-Turn . For his part in The Hunted by Paul Schrader in the same year Nolte was nominated again for an Oscar and various other awards. A year later he got a bigger role in Terrence Malick's war film The Thin Line . At the beginning of the new millennium, his leading role in The Thief of Monte Carlo (2003) received critical acclaim, and in the drama Clean (2004) he played alongside Maggie Cheung , who received the Cannes Film Festival's Acting Award for her role in the film . Since then, Nolte has mostly played supporting roles. The most sensational was in 2011 in the sports drama Warrior , for which he received his third Oscar nomination. He played leading roles in 2015 in Picnic with Bears at the side of Robert Redford and in 2018 in the film drama Head Full of Honey .

Nolte was repeatedly noticed in public for excessive alcohol consumption. So he was u. a. caught by the police while driving while drunk. However, Nolte claims to have been cured of alcoholism in the meantime .

Nolte, divorced three times, has two children. A son, Brawley Nolte (* 1986), from a previous marriage, and since October 2007 a daughter with his 38-year-old long-time partner, Clytie Lane. The daughter, Sophie Lane Nolte , starred at his side in Head Full of Honey .

In 1992, he was named Sexiest Man Alive by People Magazine .

Although Nolte was dubbed by Tommi Piper in Just 48 Hours , Thomas Danneberg has taken over Nolte almost without exception since the mid-1980s . In Der schmale Grat , Hans-Werner Bussinger took over the dubbing, as John Travolta also had an appearance, which is also dubbed regularly by Danneberg. Since Warrior , Piper on Nolte has been cast again quite often.