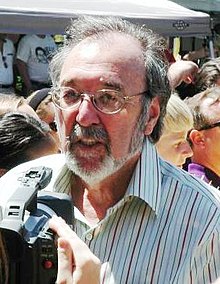 James L. Brooks (born May 9, 1940 in North Bergen , New Jersey ) is an American screenwriter , film producer , film director and actor . He has gained fame as the director of such films as Time for Tender and Better It Couldn't, and as a co-creator and producer of series like The Simpsons and Mary Tyler Moore . In his career he won the most important awards in the US film industry.

After dropping out of his studies at New York University , Brooks made a name for himself in show business in the 1960s when he - often in collaboration with Allan Burns - developed various television series. The Mary Tyler Moore Show became particularly successful from 1970 , from which the spin-offs Rhoda and Lou Grant also developed. He was also involved as a developer and producer on other television series such as Room 22 and Taxi . He is also one of the fathers of the Simpsons and one of the producers of the series to this day. Brooks was the most important sponsor of the then unknown Matt Groening in the 1980s and pushed through the production of the cartoon against resistance.

As a film director, Brooks made six feature films between 1983 and 2010, many of them in the field of tragic comedy . He has eight Oscar nominations for Tenderness Time , The News Fever - Broadcast News , Jerry Maguire - Game of Life (where he was producer), and It couldn't be better . He received the trophy three times for the former film: as a producer, as a director and for the script.

Brooks was married to Marianne Catherine Morrissey from 1964 to 1972 and to Holly Beth Holmberg from 1978 to 1999, both marriages were divorced. He is the father of four children.