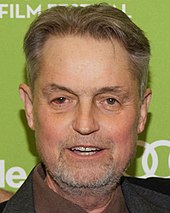 Robert Jonathan Demme (born February 22, 1944 in Baldwin , New York - † April 26, 2017 in New York City ) was an American film director and Oscar winner. His best known works are the thriller The Silence of the Lambs and the justice drama Philadelphia .

Jonathan Demme grew up in Long Island . At the age of 15, he moved with his family to Miami , where he attended high school and college . By his own account, he was already a "movie junkie" at the time, but was still limited to US films . The first Nouvelle Vague film he saw, Truffaut's Shoot You At The Pianist (1960), made a big impression on him and convinced the editorial staff of the college newspaper to accept him as a film critic .

After graduating from college, he first studied veterinary medicine , but failed after a short time due to insufficient knowledge of chemistry. He also wrote for smaller newspapers as a critic until his father met producer Joseph E. Levine, through whom Demme got a job as a press agent. In the following years he worked for various production companies, including United Artists and Avco Embassy , but continued to write reviews. He shot commercials in London in the early 1970s. There he met the B-movie director Roger Corman , with whom he worked from 1971 to 1976. Corman also came up with the idea for the biker film Angels Hard as They Come (1971), for which Demme wrote the script together with director Joe Viola . Akira Kurosawa's Rashomon served as a template . Demme produced the film, Viola directed.

Demme first appeared as a director in The Prison of the Lost Girls (1974). In 1977 he made Handle with Care, which earned him positive reviews. However, he did not gain international recognition until 1980 through Melvin and Howard . He proved that he could shoot for a larger audience in 1984 with Swing Shift , where he first worked with stars like Goldie Hawn and Kurt Russell . Also in 1984 was Stop Making Sense , the documentation of a concert by the new wave band Talking Heads . Demme has worked for the music industry on several other occasions, including shooting video clips for New Order , Suzanne Vega , Bruce Springsteen , The Neville Brothers , Artists United Against Apartheid and others. In 1988, The Mafiosi Bride, with Michelle Pfeiffer and Matthew Modine in the lead roles, was made, a comedy that has received several awards for the performance of its actors and for which David Byrne of the Talking Heads was responsible for the film music.

In 1989, Demme received an offer from Orion Films to film Thomas Harris ' successful novel Das Schweigen der Lämmer . The film adaptation of the novel was a worldwide success, both commercially and artistically. It is one of the few films that received an Oscar in the five most important categories. The film was inducted into the National Film Registry for Preservation in 2011. Demme made Philadelphia in 1993 , which also became a commercial success. With the 1998 feature film Menschenkind , the film adaptation of a novel by Nobel Prize winner Toni Morrison , and the remakes The Truth About Charlie and The Manchurian Candidate , he could no longer build on his successes. In 2008 his drama Rachel's Wedding was premiered as a competition entry at the 65th Venice Film Festival.

Demme got involved politically with films for democracy in Haiti . He was a founding member of the Artists United for Democracy organization in Haiti and worked on other Haiti projects. At the beginning of the 1980s he founded the production company Clinica Estetico with Gary Goetzman .

Demme was initially married to the director and producer Evelyn Purcell . His second marriage to Joanne Howard had three daughters. His nephew Ted Demme , who died in 2002, was also a director. Jonathan Demme died of esophageal cancer on April 26, 2017 with his family .