Suzanne Vega was born in Santa Monica, California. A year after she was born, her mother moved with her to New York , where Vega grew up in East Harlem and on the Upper West Side . She started writing poetry at the age of nine; she wrote her first song when she was 14 years old. First, she attended La Guardia High School of Music & Art and Performing Arts , where she studied modern dance. However, she realized that music was her calling. When she at Barnard College of Columbia University English Literature studied, she performed on small stages in the New York art district Greenwich Village on. In 1984 she got her first record deal.

Vega mostly writes music for her guitar . In production, the songs are arranged for a multi-piece band.

The 1985 debut album Suzanne Vega was extremely well received. The songs counter the “Bigger is better” motto in the mid-1980s. However, they are not typical protest songs, but rather introspective .

The follow-up album Solitude Standing , released in 1987, contains two songs that made Suzanne Vega known to a wider public: Tom's Diner , a song about Tom's Restaurant , also known through the adaptation of the group DNA and the fact that it was the first song ever in the MP3 format has been converted, and Luka , a song that was written from the perspective of an abused child. Compared to their first album, the music is more oriented towards rock music .

The third album Days of Open Hand from 1990 is a self-contained work. Music and text are carried by mystical symbolism and deep emotions. The music is more experimental compared to the previous albums.

In 1992, 99.9 ° F was released. The album consists of a mix of acoustic folk and songs that move between dance beats and industrial noise .

Album number five, Nine Objects of Desire, was released in 1996. Musically, Vega varied the earlier, simpler style with the more extensive production of 99.9F ° as well as bossa nova . 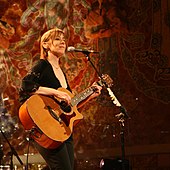 In September 2001 her album Songs was released in Red and Gray . As an expression of their experiences, the relationship between men and women, especially their misinterpretations and failure, came to the fore. Musically, Vega concentrated more on acoustic elements again. At the same time, she formulated a higher claim than just producing an uncomplicated folk album.

In 2007, Beauty & Crime was released , the first album released on the Blue Note Records label.

On February 9, 2010 her album Close-Up Vol. 1, Love Songs (worldwide release date June 14, 2010) was released in the USA on her own label “ Amanuensis Productions”. It contains new recordings of existing songs on the subject of "love". By 2012, four albums with new recordings had been released, the second part on the subject of “People, Places and Things”, the third part on the “State of being” and the last part with “Family songs”. The idea behind it is, on the one hand, to keep the songs available (since she doesn't have a record deal) and, on the other hand, to have at least one version of your own songs if you don't have the original recordings. The new recordings are acoustic versions of the songs.

In 2011, Vega devoted herself primarily to her play Carson McCullers talks about love , a fictional autobiography with specially arranged songs by the writer Carson McCullers , which premiered in New York in April 2011 with Vega in the lead role.

After a seven-year hiatus, Suzanne Vega released a studio album with ten new songs in February 2014. The album is titled Tales from the Realm of the Queen of Pentacles and was produced by guitarist Gerry Leonard . Until the middle of the year Vega was on a world tour in Europe, the USA, Asia and Australia. In 2016, Suzanne Vega came to Germany for a few gigs.

Although Suzanne Vegas' commercial success waned from the mid-1990s, some of her songs like Tom's Diner and Luka shaped the musical face of the early decade. The music press took her success at the end of the eighties as an opportunity to compare her with the musicians Tanita Tikaram , Tracy Chapman and Michelle Shocked, who are also strongly song-oriented . The simultaneous success brought more feminist impulses into rock music and contributed to improving the position of women in the rock business.

The MP3 -Forscherteam to Karlheinz Brandenburg made the first practical tests with the a cappella version of the song Tom's Diner by Suzanne Vega. In his search for suitable test material, Brandenburg read in a hi-fi magazine that their testers were using the song to assess loudspeakers and found the piece to be a suitable challenge for audio data compression . Tom's Diner , a song about a small restaurant in New York, became the world's first song in MP3 format - and Suzanne Vega became the “mother of mp3”.

Suzanne Vega with a Peabody Award (2004)

Suzanne Vega separated in 1998 after three years of marriage from her husband Mitchell Froom, the father of their daughter Ruby, who was born in 1994. She switched manager and record label and devoted herself to her first book, The Passionate Eye: The Collected Writing of Suzanne Vega . In 2006 she married the lawyer Paul Mills, with whom she lives in New York.