There are basically two different forms of esophageal cancer, so-called adenocarcinoma and squamous cell carcinoma. These differ with regard to their histological appearance ( histology ), their causes ( etiology ), their location (upper, middle, lower esophagus) and their genetics, etc. on the bottom of a reflux disease (acid reflux into the esophagus). The so-called Barrett's esophagus (formerly endobrachy esophagus) is regarded as a preliminary stage (precancerosis) . Squamous cell carcinomas arise in every location of the esophagus (cervical = on the neck; suprabifurcal = above the bifurcation of the trachea, infrabifurcal = below the bifurcation of the trachea). Alcohol and smoking are believed to be the main causes of squamous cell carcinoma.

Esophageal cancer is more common in the Far East than Europe , which is likely due to eating and drinking habits. In Asia, for example, a lot of hot tea is consumed. It is not the tea itself that is carcinogenic , but rather burns caused by the heat. In the United States, SEER estimates 18,440 cases of esophageal cancer should occur in 2020 . That is 1% of all tumor diseases. At the same time, 16,170 patients die as a result of esophageal cancer. That's 2.7% of all cancer deaths in the United States. The incidence in the years 2013–2016 was 4.3 per 100,000 inhabitants. The prevalence of the sick is 47,690 (= living patients with esophageal cancer in the USA, estimate for 2017). 18% of the cases were localized. Of these, 47.1% survived 5 years. Another 33% were regionally spread. Of these, 25.2% survived 5 years. 39% of the cases were already metastatic at the time of diagnosis. Of these, only 4.9% survived 5 years. In another 10% the degree of spread was unknown. Men had a higher risk of developing esophageal cancer at 7.3 per 100,000 population per year than women at 1.7. The median age of onset in the US is 68 years.

The following factors increase the risk of developing esophageal cancer:

Alcohol especially increases the risk of squamous cell carcinoma of the esophagus. Adenocarcinomas and tumors at the esophagus-to-stomach junction (AEG) are not more common with alcohol use. This can be explained with the other development mechanism via metaplasia of the squamous epithelium in the esophagus.

Also, obesity increases the risk for esophageal cancer. Adenocarcinomas of the esophagus and the esophagogastric junction are particularly affected. Overweight people often experience gastric acid reflux into the esophagus. This can cause metaplasia of the squamous epithelium. This is considered a risk lesion for the development of a carcinoma.

In achalasia , the transport of food in the esophagus is hindered because the lower esophageal mouth does not open properly. Achalasia increases the risk of squamous cell carcinoma of the esophagus by 11 times and that of adenocarcinoma by 10.4 times.

A gastro-oesophageal reflux disease develops when regularly stomach acid into the esophagus ascends (clinically heartburn ). This process is promoted by a too low muscle tone of the lower esophageal sphincter , which can be triggered by nicotine, alcohol, caffeine, a high-fat diet and various medications.

Barrett's syndrome is an optional precancer for esophageal carcinoma .

Esophageal cancer is spreading rapidly and the symptoms are often uncharacteristic, which is why the disease is usually diagnosed in the late stages .

The cardinal symptom is dysphagia (difficulty swallowing - while eating it can feel as if the bite would get stuck in the throat or behind the ribs, combined with locally andauerndem pain ). Later on, soft food can also become a problem, and possibly drinking too . Common symptoms are a burning sensation when swallowing food, racing heart when drinking hot drinks.

An obstruction (narrowing) of the esophagus usually occurs late or not at all, as the carcinoma spreads lengthways. Late symptoms include saliva shedding, spitting up undigested food, and weight loss. Pneumonia , caused by fluid that has got into the windpipe , can occur ( aspiration ). Coughing and hoarseness can also occur when cancer has spread to other tissues near the esophagus . The symptoms of the cancer that has spread to other areas depend on where the cancer is spreading.

Improved treatments have helped increase the life expectancy and quality of life for people with this disease.

A carcinoma as seen on endoscopy. 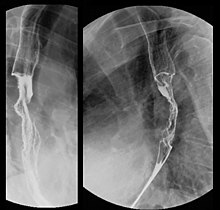 X-ray swallowing examination: the normal smooth contour of the esophagus is destroyed by the carcinoma.

The most important measure to make a diagnosis is an endoscopy of the esophagus. This is usually performed as part of a combined esophago-gastro-duodenoscopy (mirroring of the esophagus, stomach and duodenum). After an anesthetic is administered, a thin, flexible tube is inserted into the esophagus. Biopsies are taken from suspicious areas and the tissue is examined by a pathologist .

An X-ray of barium sulfate during swallowing allows you to see fluid moving down the esophagus. This can help monitor the size, condition, and location of the tumor.

An endoscopic ultrasound scan can determine the depth of the ulcer and provide more information for treatment. During endoscopy, a tissue sample can also be taken ( biopsy ) and examined in the laboratory.

Blood tests and other x-rays can help determine if the cancer has spread outside of the esophagus.

A bronchoscopy is usually done to determine if the windpipe has been affected. Other tests that detect possible spread ( metastases ) of the tumor include: B. computed tomography of the chest , abdomen and pelvis and positron emission tomography . A bone scintigram can be taken if bones are suspected to be involved .

The staging is based on the eighth edition of the UICC's TNM classification. This classification only applies to carcinomas, i.e. tumors that originate from the surface epithelial cells, but not to sarcomas or lymphomas. Also included are tumors from the transition to the stomach. If the center of the tumor is up to 2 cm from the esophagus-stomach junction in the gastric cardia and the tumor protrudes into the esophagus, it is considered an esophageal tumor.

Regarding the N stage: Regional lymph nodes are those that correspond to the lymphatic drainage area of ​​the esophagus. This also includes the paraesophageal lymph nodes of the neck. In addition, the celiac lymph nodes, which are located on the celiac trunk in the abdomen. Metastases in the lymph nodes supraclavikulären in the supraclavicular fossa mean an M1 stage. 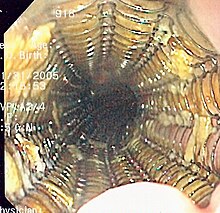 The insertion of a stent has a palliative character.

Treatment depends on the size and location of the tumor, whether and how far it has spread, the age and general health of the patient .

Treatment options are surgery , radiation therapy , anti-cancer drug therapy, or a combination of all of these therapies. The aim of treatment is basically healing (curative therapy approach), which is best possible with the early forms or after pretreatment with medication and radiation before the operation (neoadjuvant therapy). It is not uncommon for a proportion of patients (20-40%) with advanced tumor disease to be cured after combined radiochemotherapy. A curative concept is rarely used in patients with distant metastases. If the patient's condition does not allow curative treatment (e.g. in the case of several comorbidities, several distant metastases), palliative treatment is given. According to the guideline, the operation is carried out as a subtotal esophagus en bloc resection with removal of the regional lymph nodes. The replacement of the esophagus is usually achieved with the stomach that has been converted into a tubular shape (stomach pull-up). As an alternative method, e.g. B. after previous surgery on the stomach, a portion of the large intestine is interposed (colon interposition).

Palliative care aims to make the patient feel better by reducing pain and making swallowing easier. Possible treatments are a combination of radiation and drug treatment, photodynamic therapy, in which blockages of the esophagus are removed with a laser , expansion therapy or bridging therapy using special stents .

In recent years, endoscopic therapy ( endoscopic resection (ER)), in particular endoscopic mucosal resection (EMR) , has become established for early forms (limited to the mucous membrane) of esophageal cancer (both adeno and squamous cell carcinoma ). In this form of endoscopic therapy, the tumor is sucked in during a gastroscopy with a special device attached to the endoscope and then resected. This therapy should be used if the malignant change is only limited to the top layer of the mucous membrane (the so-called mucosa), since in this case the risk of metastasis is very low. The advantage of EMR is the low complication rate, while the operation (the so-called radical esophageal resection) has a complication rate of 30–50% and a mortality rate of 5–20%, depending on the experience of the surgical center. Endoscopic therapy, too, should only be carried out in hospitals with extensive experience in this area.

There is no way to avoid this type of cancer. You can reduce the risk of getting it by not smoking, drinking little alcohol, and avoiding very hot foods and drinks. A protective effect of fresh fruit and vegetables as well as long-term intake of acetylsalicylic acid (ASA) and non-steroidal anti-inflammatory drugs (NSAIDs) is described. Regular examinations and careful observation of changes in your own body make sense to identify problems early on.