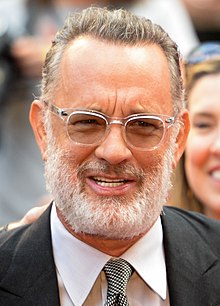 Thomas Jeffrey "Tom" Hanks (born July 9, 1956 in Concord , California ) is an American actor , screenwriter , director , film producer and voice actor . He is one of Hollywood's most high-profile character actors and has been awarded the Oscar for Best Actor twice in a row for his leading roles in the films Philadelphia (1993) and Forrest Gump (1994) . He has also received four Golden Globes and in 2002 was the youngest actor to date to be honored with the AFI Life Achievement Award for his life's work.

According to his own account, Tom Hanks comes from “turbulent family circumstances”. His parents, Amos Hanks and Janet Marylyn Frager († 2016), divorced early, and he grew up with his siblings Sandra and Lawrence with his father and changing stepmothers, while younger brother Jim Hanks stayed with his mother.

In April 1988 he married actress Rita Wilson . He has two sons with her ( Chet Hanks , * 1990 and Truman, * 1995). Wilson is of Bulgarian-Greek descent; In 1988, Hanks converted to the Greek Orthodox Church . Hanks and his wife have been Greek citizens since July 2020; they have owned a house on the island of Antiparos for years . 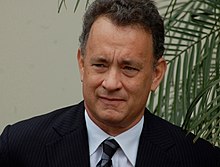 Tom Hanks discovered his interest in acting during his time in high school , where he often went to the theater and gained his own experience in acting classes. Accordingly, after graduating from high school, he began studying acting . In addition, he worked for three years at the "Great Lakes Theater Festival" in Cleveland , where he gained experience in all theater-related areas from stage design to lighting and sound engineering. He also played the role of Proteus in Shakespeare's Two Gentlemen from Verona , for which he received the “Cleveland Critics Circle Award” for best leading actor.

In 1979 he moved to New York , where he got his first film and television roles. Among other things, he worked on the sitcom Bosom Buddies and had guest appearances on the series Taxi (with Tony Danza and Christopher Lloyd ) and Happy Days . During this time he met Ron Howard , with whom he later worked on many projects. Howard also gave him his first leading role in a movie - in the comedy Splash, directed by Howard. After other successful comedies such as Gift Is Still Too Expensive or Scott & Huutsch , he finally received offers for more serious roles, such as in Purgatory of the Vanities and A Class of Their Own . In 1993 he had his final breakthrough with the hit films Sleepless in Seattle and Philadelphia . Hanks won the Academy Award for Best Actor for his role in Philadelphia as Andrew Beckett, who had AIDS . In the following year he received his second Oscar for portraying the mentally retarded Forrest Gump in the film of the same name. Only Spencer Tracy before him won two Oscars in a row in the "Best Actor" category . His acceptance speech at the Philadelphia Academy Awards , where he thanked a gay teacher, kicked off the film In & Out .

Numerous successful cinema productions followed, in which Hanks took the lead role, including in Apollo 13 , Saving Private Ryan , Cast Away and in The Da Vinci Code .

In 1996, Hanks moved behind the camera for the first time. Together with producer Gary Goetzman, he founded the production company Playtone , with which he will henceforth produce films. The first Playtone production, That Thing You Do! , he was responsible as a screenwriter and director, took on a leading role and worked on the film music. Together with his wife Rita Wilson he produced the comedy My Big Fat Greek Wedding . He appeared as a producer and writer on the TV series From the Earth to the Moon and Band of Brothers . In addition, Hanks took on speaking roles for cartoons such as Toy Story , The Polar Express and The Simpsons - The Movie .

In order to be able to portray his roles as credibly as possible, Hanks also takes on physical strain. For the film Cast Away, for example, he had to gain and lose weight significantly in a relatively short period of time in order to be able to credibly portray the role of a castaway. The shooting was interrupted for several months after the scenes before the plane crash with him as the manager of FedEx with a sturdy build.

Tom Hanks had a very short and wordless appearance in 2004 in the film Elvis Has Left the Building . As a motorcyclist , he was fatally hit by a mailbox and got stuck in it.

In 2017, Hanks published the short story collection Weird Types (OT: Uncommon Type ), which is about his typewriter collection, among other things.

Since the mid-1980s, Hanks has been dubbed almost exclusively by Arne Elsholtz , who cast himself as the voice for Bachelor Party - Die wüsten Fete because he directed the dialogue and wrote the dialogue book. In between, Detlef Bierstedt ( Nothing in Common ), Joachim Tennstedt ( Big ) and Ekkehardt Belle ( A class of its own ) were also active as voice actors for Hanks. When cartoons or animated films in which Hanks played a role in the original were dubbed, voices other than Elsholtz were generally cast (exception in Der Polarexpress ). B. the character Woody in Toy Story and his successor Peer Augustinski as dubbing voice, after his death in 2014 Michael Herbig took over the character in the following productions. From Forrest Gump , Elsholtz was able to assert himself for many years as the sole voice actor for Hanks. After Elsholtz's death in 2016, the last films with Hanks were alternately dubbed by Joachim Tennstedt and Thomas Nero Wolff .

As an actor / voice actor

As a film producer

Tom Hanks' star on the Walk of Fame