The Da Vinci Code - Da Vinci Code is an American film adaptation of the thriller of the same name Da Vinci Code (2003) by Dan Brown from the year 2006 . Directed by Ron Howard . The cast includes Tom Hanks , Jean Reno , Audrey Tautou and Ian McKellen , among others . The film was shown in theaters in Germany from May 18, 2006 and in the United States from May 19, 2006.

At the beginning a man walks through the Louvre at night . He is persecuted, threatened and finally murdered by an unknown person. It is later learned that the person killed was Jacques Saunière, the curator of the Louvre. 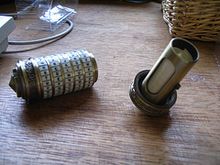 Robert Langdon , symbologist at Harvard University , is in Paris to give a talk and present his new book. Police officers appear at the book signing that follows. They show him the photo of Saunière's body and ask him for his opinion. Finally Langdon goes to the deserted Louvre, where the police await him and lead him to the corpse, which is still there on the ground. It turns out that while he was still dying, the man who was killed left a message to his granddaughter Sophie Neveu, who works as a cryptologist for the Paris police. It also turns out that the curator belonged to the Prieuré de Sion brotherhood . You should have also Leonardo da Vinci , Victor Hugo , Claude Debussy and Sir Isaac Newton have listened. The curator was Grand Master of the Brotherhood; Besides him, the three seneschals were also murdered. Langdon, suspected by the police of having committed the murder, flees the Louvre with Neveu. During the subsequent chase, they can shake off the police with their car. During their research , Robert and Sophie repeatedly come across hidden signs and symbols in the works of Leonardo da Vinci, which, among other things, are hidden in a cryptex.

They seek advice from Langdon's old friend Leigh Teabing, a Grail researcher . Together they set out to get to the bottom of what happened. One learns of revolutionary insights that on the one hand point to the Holy Grail, on the other hand support the thesis that Jesus Christ and Mary Magdalene had a daughter together. Both would shake the foundations of the Christian churches. The search of the scientists is made more difficult by the intervention of mysterious members of the prelature Opus Dei , who want to keep Roberts and Sophie's findings under all circumstances - but they are deceived. While Langdon and his confidante follow further clues in London, it turns out that it all boils down to a man who calls himself the "teacher".

Finally, Leigh Teabing confesses to being the mastermind who threw out a huge web of lies in order to find the Grail. At gunpoint, he asks Langdon to decipher the cryptex in order to find the Grail. Thanks to a ruse by Langdon, however, Teabing loses his weapon and is finally taken away by the police. The members of Opus Dei, who were on their heels, then realize that they had been betrayed. At the old location of the alleged sarcophagus of Maria Magdalena, Neveu learns that she is the last living descendant of her and Jesus.

At the end, Langdon is in his room at the Ritz Hotel in Paris, shaving. He accidentally injures himself and blood drips into the sink. This reminds him of the rose line (also known historically as the blood line). Jacques Saunière had said in an encrypted message to Neveu - who, in contrast to the book, is not his biological granddaughter in the film - that the Holy Grail was hidden under the rose (rose line). Langdon recalls that the original prime meridian ran through Paris , referred to in the film as the Rose Line. This first prime meridian is marked in Paris by 135 brass plaques embedded in the pavement, which thus represent the rose line. Langdon follows these signs and arrives at the Louvre. He recognizes that there, under the line of roses marked by the Arago medallions and under the pyramids touching each other at the tips, lies the grave of Mary Magdalene, i.e. the Holy Grail. He kneels on the upturned glass pyramid of the Louvre over her grave, as the Knights Templar did before him.

In the extended version ( Extended Version ), there are some changes and additional scenes. Above all, Fache, Silas and Aringarosa are characterized more clearly.

The soundtrack comes from Hans Zimmer .

During the filming it became clear that the novel was a nuisance for some Christians, not just for members of Opus Dei, which was also attacked in the novel . A Catholic nun protested for twelve hours in front of the Anglican Cathedral in Lincoln, England, against the filming. Sister Mary Michael, who claims to have not read the book in full, according to media reports, prayed on her knees in front of the building where Hollywood star Tom Hanks shot scenes for the film for two days. The nun thinks the book is " heresy ". In particular, the thesis that Jesus Christ married Mary Magdalene and had a child with her is a "heretical claim".

Lincoln Cathedral Chancellor Mike West called the book heretical and "historical nonsense" in a public address . Alec Knight, the dean of the Anglican cathedral, called the bestseller a "pile of nonsense". Nevertheless, he reached an agreement with the US film studio Sony about the shooting after a donation of around 146,000 euros had been promised.

Sources of refutations and statements by the experts would make the last paragraph more credible.

The controversial theses in Dan Brown's novel have largely been refuted by the official churches and are not taken seriously by many experts - especially when it comes to Pierre Plantard and his legend of the secret society Prieuré de Sion. Even in the popular science publications triggered by the filming , many theses are viewed as fiction , although a new perspective on the position of women in church and religion is derived.

On the first cinema weekend (May 19-21, 2006), The Da Vinci Code achieved its second most successful cinema release of all time (only Star Wars: Episode III - Revenge of the Sith was even more successful). In the United States, however, the film only reached 36th place in the ranking of the highest box office sales on the opening weekend at 77 million US dollars - behind films such as The Passion of the Christ , Shrek 2 and the Harry Potter films.

With around 2000 film critics who saw the film a day earlier than the festival audience in Cannes, The Da Vinci Code almost unanimously failed, as the reviews published so far suggest; in the German-speaking area, for example, FAZ , Süddeutsche and Neue Zürcher Zeitung.

The “Critics Tomatometer” on the Rotten Tomatoes film review website, which has been in existence since 1998, provides a picture of the mood from the USA . Of the 220 individual reviews from accredited critics, only 55 (25%) were positive.

In the FAZ , Verena Lueken wrote on May 18, 2006: “Of course it is a special challenge to retell a story that everyone knows who has not spent the last few years on an expedition to Mars in such a way that one forgets how she runs out. Or at least begin to be interested in something else on the way to the known ending. But the director Ron Howard couldn't think of anything. He plays the story from scratch, he lets the characters talk, explain, lecture and think aloud, as they do in the book. In between he chases her through well-developed tourist areas and ensures that no speck of dust gets stuck on her shoes, no breeze ruffles her hair and never shines her nose. This hunt for the Holy Grail in the book lasts twenty-four hours, in the cinema it feels just as long, although after two and a half it's the end. Audrey Tautou pretends not to play along. Only Ian McKellen in the role of the mysterious Sir Leigh Teabing seems to be having fun. [...] With everyone else, the cameraman Salvatore Totino also creates pomp by kinking the camera and bowing in front of works of art, the landscape or a courtyard entrance. Again and again he leads her along the floor until she has reached her destination and raises her gaze like a dog from the dust, an idea that becomes completely ridiculous when the goal is none other than the porter of a safe rental. That Silas, the albino monk, whom Paul Bettany demonically gives, without us having to fear him, practices self-flagellation and bloodies himself, is brought to us from above, below, behind (not from the front: Silas is naked), in the same way like the various sarcophagi, secret vessels or car interiors. There are also flashbacks: to the story, big and small, and always in blue. "

The lexicon of international films called The Da Vinci Code a “film that is absurd in its theses, but nevertheless thoroughly entertaining, that feeds its story from questionable conspiracy theories and despite its proximity to mainstream cinema through the performance of the Main actor gets its very own character. "

The film has been released in several versions on DVD , Blu-ray Disc , Ultra HD Blu-ray and UMD . The normal version in the Amaray (optionally also available in the steelbook ) contains the theatrical version of the film and only various trailers as bonus material. In addition to the 24-minute longer version of the film, the Extended Version contains a second DVD with various documentaries on the film. In addition to the Extended Version, the Extended Version & Audiobook also contains the Director's Cut of the audio book on 6 CDs . In addition to the extended version of the film, the cryptogram gift set contains a cryptex replica, an exclusive set design, Robert Langdon's notebook, a cryptex booklet, a voucher for the purchase of the audio book and an exclusive competition. Furthermore, this version is limited and numbered.

In addition to the longer film version and the extras of the extended version of the DVD, the Blu-ray version also contains further documentations on the film and some interactive extras. The UMD version only includes the cinema version of the film.

The film was first shown on German free TV on October 12, 2008 on ProSieben .

In 2008 another novel by Brown was made into a film based on Illuminati . The role of Langdon was cast again with Tom Hanks, the Israeli actress Ayelet Zurer mimes a nuclear physicist. The film ran in May 2009 with the title Illuminati (original title Angels and Demons ) in Germany. The film for the fourth book in the Robert Langdon series , “Inferno”, was released in German cinemas in October 2016. Hanks plays Professor Langdon again, directed by Ron Howard .

The German dubbing was carried out at Interopa Film GmbH in Berlin. Axel Malzacher directed the dialogue .

Hit the gas ... and don't get caught | Julie conquers the sky | Nightshift - The morgue is completely freaking out | Splash - A virgin on the hook | Cocoon | Gung Ho | Willow | An amazing family | Backdraft - Men Who Go Through Fire | In a distant land | Headlines | Apollo 13 | Bounty - One will pay | EDtv | The Grinch | A Beautiful Mind - Genius and Madness | The Missing | The comeback | The Da Vinci Code - The Da Vinci Code | Frost / Nixon | Illuminati | Biggest Friends | Rush - Everything for victory | In the heart of the sea | Inferno | Solo: A Star Wars Story | Pavarotti | Hillbilly Elegy