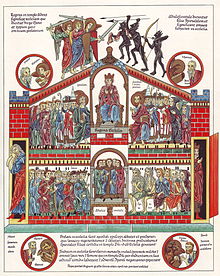 The term was brought to Central Europe (after Heinrich Friedrich Jacobson ) by Celtic Christians from Britain or taken up in Christianity in the Roman colonial cities (Metz, Trier, Cologne) during the Constantinian epoch . Since then, it has mainly been applied to religious communities of a Christian denomination . The Ekklesia , the Christian community of faith , is organized in various churches. 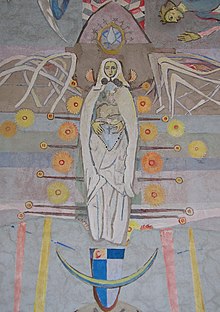 Mary, the “ apocalyptic woman ” ( Rev 12: 1–18  EU ) as an image of the church in the Catholic understanding: fresco of the Seckau Apocalypse by Herbert Boeckl , 1952–1960, angel chapel of the Seckau basilica
→ Main article : Ecclesiology

The church sees itself theologically as the “people of God” in continuity with the first chosen federal people of Israel (the Judeo-Christian dialogue has an eventful history in this regard). Through the calling of the apostles , Jesus Christ wanted to gather Israel together again; Following these apostles, the churches see themselves as the witnesses of the gospel who pass on the message of Christ and thus not only proclaim salvation to the world , but also make it present in it through the Holy Spirit .

Classically, the Church is known with the creed as the "one, holy, catholic and apostolic" (cf. Notae ecclesiae ). More precisely, this means: You as the Church of Jesus Christ come from him to unbreakable unity; it is holy in all human sinfulness, because it belongs to God and is ordered to him; it is known as Catholic in the sense of all-embracing and worldwide; and finally it is in historical continuity with the apostles and is therefore apostolic.

The Protestant theology sees the church as a priority as creatura verbi , as the word creature, because the church lives by the Word of Christ - and this in double sense, firstly on the message that Jesus Christ has proclaimed itself, on the other hand by the Embassy, which the Church proclaims of him following the New Testament testimonies . The Confessio Augustana (Art. VII) professes the "one holy, Christian church [...], which is the assembly of all believers, to whom the gospel is preached purely and the holy sacraments are administered according to the gospel." The gospel continues Understanding of the church from a visible and an invisible church, on the one hand from the "invisible" church of the elect, which goes into one with the heavenly church with the angels and saints of God and to which possibly not all belong who are externally connected to her ; on the other hand from the church visible on earth with all its inadequacies and faults. The Protestant churches refer to the origins of Christianity in the New Testament and the reformatory impulses of the dawning modern age BC. a. by Martin Luther .

The orthodox understanding of the church sees the church first and foremost as a theandric (i.e. divine-human) entity that represents an interaction of divine and human activity and is created in unity and diversity in the image of the Trinity . It is committed to the image of the church as the “ body of Christ ” (cf. 1 Cor 12) and particularly emphasizes the work of the Holy Spirit as a continuation of the work of Christ. The sacraments are therefore particularly important to her , primarily the Eucharist , which she regards as the key to an understanding of the Church and Christianity in general. Furthermore, the connection to the heavenly Church and its fellowship with it are important to Orthodoxy. The Orthodox churches refer primarily to the first councils of church history and the church fathers.

The Catholic Church has on the Second Vatican Council for the first time in a synopsis to their understanding of the church expressed by emphasizing different aspects. Traditionally, the sacraments and ecclesiastical office are particularly important to her. These premises are now included in the designation of the church as the basic sacrament, a view that defines the church as an instrument and a sign of salvation (cf. LG 1). In addition there is the so-called communio theology , which regards the being of the church as a community between God and people and between individual people and groups of people. An important point is v. a. the "unified office of Peter" - the papacy . Theological balance still has to be found theologically between the communion of bishops on the one hand and the central position of the Pope on the other. Sources of the Church's understanding of the Catholic Church are the Holy Scriptures and its own tradition.

A member of a Christian church is one usually through the baptism , often already as a small child . However, since an infant does not make a conscious decision at baptism, this form of membership is involuntary and a cause of later leaving the church . In addition, most western countries are showing increasing secularization , which is leading to a decline in membership.

The financing of the churches differs depending on the country. In Germany, the churches recognized as public bodies are entitled to collect the contributions of their members in the form of church tax. Depending on the regional church, they are the main source of funding for the national churches with 30–80% . The churches do not receive any subsidies as defined in the Federal Government's latest subsidy report, but compensation payments ( state benefits ) based on property that was nationalized as part of secularization by the Reichsdeputationshauptschluss ; this property made up about 27% of the area of ​​today's Federal Republic and was largely donated in the Middle Ages by wealthy and noble people to the church. In addition, income from foundations and income from remaining own assets, as well as state subsidies based on the principle of subsidiarity, also play a role. This income is supplemented by further donations and voluntary community contributions.

The free churches , often also corporations under public law, finance their work mainly from voluntary contributions from their members, which are tax-deductible up to a certain amount.

Churches as a company

Around two million people work in church companies and institutions in Germany. Most of them with the large charities, Caritas (620,000 employees) and Diakonie (526,000 employees), the largest private employers in Germany. However, not all sectarian companies are owned by a church. The Catholic Pax-Bank or the Protestant Bank for Church and Diakonie, for example, are predominantly organized as a cooperative and belong to the association of Volksbanks and Raiffeisenbanks. There are also around 600 denominational clinics in Germany that compete with conventional hospitals.

The internal structure of the individual churches sometimes differs greatly from one another.