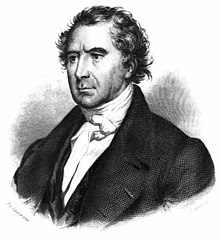 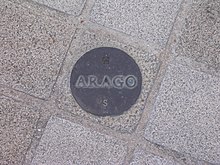 Arago's name on the Eiffel Tower

François Aragos father was François Bonaventure Raymond Arago (1754-1814), the mayor of Estagel, a small town about 18 km northwest of Perpignan , and his mother was Marie Anne Agathe Roig (1755-1845). The Arago family came from the eastern Pyrenees. François Arago's parents had eleven children, six boys and five girls. François Aragos brothers were Jean Martin Arago (1788-1836), he fought in the ranks of the rebels during the Mexican War of Independence and had embarked on a military career; Jacques Étienne Victor Arago (1790-1854), a writer and explorer, he took part in an expedition of l'Uranie under the direction of Louis Claude Desaulces de Freycinet (1779-1842) to conduct magnetic and oceanographic studies in the Pacific and Etienne Vincent Arago (1802–1892), writer, playwright and politician, then Victor Arago (1792–1867), Officier de la Légion d'Honneur , Joseph Honoré José Arago (1796–1860). In addition, the sisters Marie Rose Arago (1779–1780), Marie Thérèse Arago (1780–1780), Rose Rosette Arago (1782–1832), Marie Victoire Françoise Arago (1783–1783) and Marguerite Guidette Arago (1798–1859).

François Arago was admitted to the École polytechnique in Paris at the age of seventeen . After his studies, Pierre Simon de Laplace brought him to the Paris observatory . In 1805 he became secretary at the Bureau des Longitudes . On his behalf he carried out the meridian measurements of Pierre Méchain on the meridian of Paris in Spain and on the Balearic Islands from 1806 under great difficulties and dangers during the Spanish uprising against Napoleon together with Jean-Baptiste Biot . He reports about this in his autobiographical notes, The Story of My Youth . In 1808 Arago was arrested on Mallorca because of the lighting of a beacon on a mountain top, which was extremely suspicious at the time, but was able to escape. Biot had already returned to France earlier. Not until 1809 did Arago return to France after another capture and in the same year - 23 years old - was elected a member of the Paris Academy of Sciences and professor of geodesy and analytical geometry at the École polytechnique . He is mentioned in the Mémoires de Physique et de Chimie de la Société d'Arcueil as a member of the Société d'Arcueil .

He found his final resting place in the Paris Père Lachaise cemetery (Division 4).

In Paris in 1809 , Alexander von Humboldt met François Arago, with whom he soon cultivated a special friendship, both personally and scientifically. Both were interested in the phenomenon of geomagnetism .

Based on Thomas Young's double slit experiments on the interference of natural ( unpolarized ) light , Arago and Augustin Jean Fresnel carried out various experiments on the interference of polarized light around 1817. The aim was to gain further knowledge about the nature of the wave character of light (according to the so-called undulation theory ). At the beginning, they assumed that light is a longitudinal wave . However, their results were not compatible with the behavior of longitudinal vibrations. Together with Young, to whom Arago sent the results for discussion, they finally came to the conclusion that light must be two transverse waves oriented perpendicular to one another . Fresnel and Arago summarized their results in four statements on the interference of polarized light, the Fresnel-Arago laws .

Alexis Thérèse Petit (1791–1820) married a sister of Aragos, and together they carried out experiments on the refraction of light and the influence of temperature on the refractive index in gases. Together with this he found in 1816 the law according to which two rays polarized in one plane can interfere with one another, but rays polarized perpendicular to one another cannot.

In 1818 the French Académie des Sciences announced a competition, the jury of which was headed by Arago. The 30-year-old Augustin-Jean Fresnel contributed with a new kind of work on wave optics . After Siméon Denis Poisson had questioned the predictions of the theory with his seemingly absurd thought experiment on the formation of Poisson spots , Arago was able to prove this effect experimentally. In the English-language specialist literature, the stain is therefore also referred to as the Arago spot .

In 1820 he noticed the magnetization of iron (steel needles) by a current-carrying conductor. In 1824 he carried out an experiment in which a freely rotating magnetic needle hovers over a rotating copper disk and is also set in motion by the rotation of the disk. Michael Faraday showed a few years later that this was induction . Arago called this phenomenon rotational magnetism . It was also the first attempt to prove the eddy current .

From 1830 Arago was director of the Paris observatory and used all modern possibilities of astronomy and physics. He was the first to attribute the scintillation of the stars to interferences in the earth's atmosphere that arise from the unrest in the air. In December 1829 he became an honorary member of the Russian Academy of Sciences in Saint Petersburg . In 1832 Arago was elected to the American Academy of Arts and Sciences . From 1835 he was an external member of the Göttingen Academy of Sciences .

On August 19, 1839, Arago officially presented the invention of photography by Louis Daguerre and Joseph Nicéphore Nièpce to the French Academy of Science and the public. Previously, the Chamber of Deputies and the House of Pairs had approved a law according to which the rights to the invention were bought by the French state and given as a gift to the world. Daguerre received a lifelong monthly pension of 6,000 francs and Isidore Nièpce , the son of Joseph Nicéphore Nièpce, received such a pension of 4,000 francs.

The cable layer Arago from 1914

After the July Revolution of 1830 , Arago became involved in politics. As a republican member of the “Pyrénées-Orientales” region, he spoke in the Chamber of Deputies during the July monarchy, in particular on issues relating to shipping, the construction of canals and the railways. After the revolution of 1848 Alphonse de Lamartine brought him into the provisional government as Minister of War and the Navy. Together with his undersecretary Victor Schoelcher, he played a decisive role in the final abolition of slavery in France. For a month and a half he was chairman of the Executive Commission of the Republic before the assembly put General Louis-Eugène Cavaignac at the head of power. He refused to join Napoleon III. to join after his coup d'état in 1851, and resigned from his public offices. 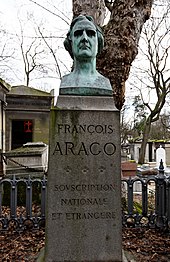 His tomb in the Père-Lachaise cemetery in Paris