This article is about the painter and inventor. For the moon crater named after him, see Daguerre (moon crater) . 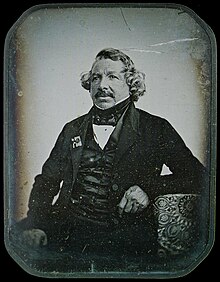 Louis Jacques Mandé Daguerre / daˈgɛ: r / (born November 18, 1787 in Cormeilles-en-Parisis , † July 10, 1851 in Bry-sur-Marne ) was a French painter and inventor of the first commercially useful photographic process, the daguerreotype . Along with Nicéphore Niépce , William Henry Fox Talbot and Hippolyte Bayard , he is one of the pioneers of photography. 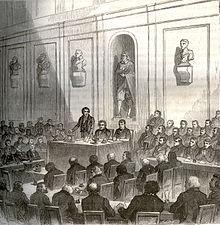 François Arago announced the discovery of Daguerre at the public meeting of the Academy of Sciences in Paris on August 19, 1839 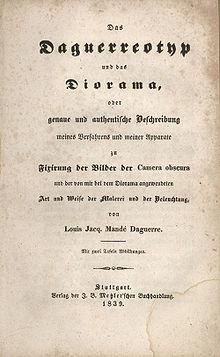 Training and early career as a theater painter

Louis Daguerre came from a humble background. He was born in 1787 as the son of Louis Jacques Daguerre (* approx. 1761) and Anne Antoinette Hauterre (* 7 July 1766) in Cormeilles-en-Parisis and grew up mainly in Orléans. His father was a court clerk and later a clerk for the royal state domain in Orléans. On September 11, 1791, his younger sister Marie Antoinette Ulalie Daguerre was born. Daguerre first attended elementary school and was then sent to an architect to teach. Later, his talent for drawing brought him to the profession of decorative painter, whereby he particularly knew how to paint panoramas. As a result, he found employment primarily in theaters. Louis Daguerre married on November 10, 1810 the twenty-year-old Louise Georgina Arrowsmith († March 24, 1857), a French woman with British roots and godchild of Princess Lamballe (1749-1792). The couple did not want to have their own child for years, so Louis and his wife unofficially adopted Marguérite-Félicité, the illegitimate daughter of Louis' brother Charles. Marguérite-Félicité worked twenty years later in Daguerre's Diorama as an assistant. After the death of her foster parents, she became the sole heir to the family fortune. With the aim of perfecting himself as an artist, Daguerre went to the prominent Parisian set painter Eugène Marie Degotti, who was also head of decor at the Paris Opera . Since 1814 he exhibited some of his works of art in the Paris Salon . Due to the many years of activity as a panorama painter, with which he mainly earned his money at Degotti, he achieved the position of leading stage painter in August 1816 at the Théâtre de l'Ambigu-Comique in the third district of the Boulevard du Temple . This theater was originally founded as a puppet theater in 1769 and was one of the most popular theaters on the Boulevard du Temple in Paris. Daguerre had a great influence on the stage design, which up until then had been rather primitive, and changed it to a modern one, filled with light effects and lavishly painted. His best-known set was the eruption of Mount Etna in the performance Le Belvédère, which was one of the most commercially successful performances of the Ambigu Theater. In the following years he also worked for the Paris Opera.

In April 1821 he teamed up with colleague Charles Marie Bouton , a panorama painter from Pierre Prévost's studio. Together they opened the Paris Diorama on July 11, 1821 in Rue de Samson (now Rue de la Douane). The sensational success meant that the two artists opened a second diorama in London on September 29, 1823. In the following ten years, numerous other dioramas opened all over Europe, which the company of Daguerre and Bouton took as models. Reports of visits to the diorama highlight the special multimedia effects of the performances there - between image, light and sound effects.

From around 1824 Daguerre dealt in connection with his diorama painting with the possibility of being able to record and fix the images projected in a camera obscura with light-sensitive materials. Through the mediation of the Parisian optician Vincent Chevalier joined with the Daguerre in Chalon-sur-Saone living Nicéphore Niépce in contact. Niépce had undertaken similar attempts as early as 1814. In 1829 they reached a legal agreement that formed the basis of their further collaboration. From then on, they cooperated on the basis of correspondence by keeping each other up to date on the progress made. Niépce, who died in 1833, did not see the process being completed, however. The cooperation agreement went to Niépce's son Isidore Niépce (1805–1868). The photographic process developed by Daguerre was probably ready for publication in 1837. This process is a unique direct positive . In a letter to Isidore Niépce dated April 28, 1838, Daguerre announced that he would henceforth refer to this process as a " daguerreotype " after himself . Daguerre's results were then presented through the mediation of the physicist, astronomer and politician François Arago (1786-1853) on January 7, 1839 in the Académie des sciences (Academy of Sciences) for the first time and finally presented to a broad public on August 19, 1839. At Arago's recommendation, the rights to Daguerre's process by the French Government were bought up and as a gift to the world public domain made. In return, Daguerre received a lifelong pension of 6,000 francs and Niépce's heir, Isidor Niépce, received 4,000 francs. In recognition of his achievements, Daguerre received numerous awards. As early as 1839 he was elected an honorary member of the National Academy of Design in New York . In 1842 he was accepted as a foreign member of the Prussian order Pour le Mérite for sciences and arts .

Louis Daguerre died on July 10, 1851 of "the bursting of a pulp artery tumor" - presumably an aneurysm - in Petit-Bry-sur-Marne near Paris.

After his death, his photographic process was used in Europe until around the mid-1850s and in the USA until the 1860s, such as the daguerreotype portrait of Abraham Lincoln from 1864, which since 2006 has been the redesigned American 5-dollar bill adorned, occupied. In this dying period, the daguerreotype was replaced by new and cheaper photographic methods. Louis Daguerre was later immortalized by name on the Eiffel Tower , see The 72 names on the Eiffel Tower . The Daguerre glacier in Antarctica also bears his name, as does the asteroid (3256) Daguerre and the lunar crater Daguerre .

Daguerre described all the equipment and chemical processes required for the production of daguerreotypes, including the camera, in great detail in his book "Historique et description des procédés du Daguerreotype et du Diorama, par Daguerre, Peintre, inventeur du Diorama, officier de la Légion-d'Honneur, membre de plusieurs Académies, etc. ” (history and description of the daguerreotype and diorama processes, of daguerre, painter, officer of the Legion of Honor, member of various academies, etc.). It was published by Susse Frères at the end of August 1839 and offered a German translation a few days later by the JB Metzler'sche publishing house .

The portrait of an artist in 1843, which is attributed to François Jules Collignon (1787–1846), the brother of Madame Daguerre, is one of three surviving portraits of Daguerre; other surviving daguerreotypes of Daguerre are now in American museums, such as the George Eastman House .

In 1977, photographic works by Louis Daguerre were shown at documenta 6 in Kassel in the famous photography department , which presented the connection to contemporary art in the context of " 150 years of photography ".